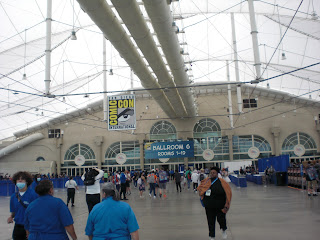 Well, here we are, two weeks removed from Comic Con 2022.  I'm still trying to process it all.  For a few days after, I wasn't even certain if it had actually happened, like maybe it was all just a dream.  But then I look at the gaping hole in my bank account and the bags full of swag that I got and I realize it all really did happen and I even got photographic evidence to prove it!
So, for one last time this summer, let's roll up our sleeves, slap on some GI Joe stick on tattoos, and take a trip to the VERY recent past and enjoy some Comic Con awesome!  Enjoy... 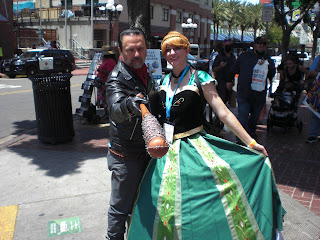 I don't think you'd want to build a snowman with him! 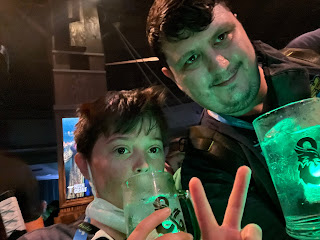 This year, my nephew Lucas tagged along for the first couple of days of the show and had the time of his life!  His dad, my cousin Chris, had just moved back to the US after two years of working in the Czech Republic.  I figured a trip to SDCC would be a great welcome home present for my ride bud and boy did we do a lot, including the Dungeons & Dragons Tavern offsite in Downtown!  What initially looked impossible to get into turned out to be the best run offsite at the Con this year!  I don't know anybody who DIDN'T get into it!  The atmosphere was incredible, the dragon attack effects were amazing and the Dragon's Brew they gave us really hit the spot!  This offsite gave anything Disney does at their parks a run for their money even!  Only downer, no swag.  But the experience was incredible! 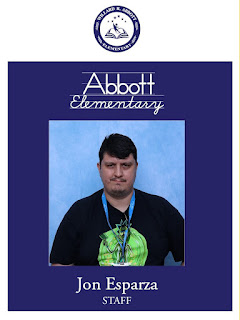 Another offsite I was able to do was the Abbott Elementary Orientation, where I became the new 3rd Grade Teacher!  They had some great swag, but this site took way longer than it should have, especially considering that I was in line hours before it opened.  A walkthrough attraction shouldn't take more than 15 minutes, tops. 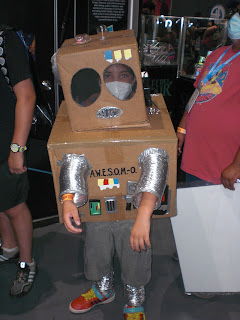 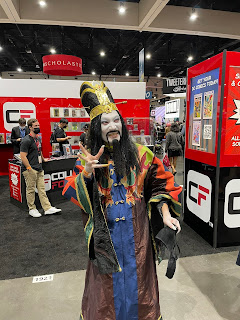 Lo-Pan was there and had a keen eye on women with green eyes! 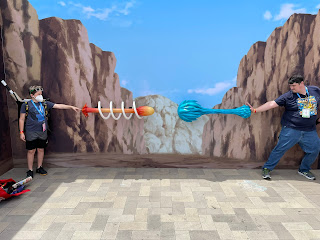 The Dragonball crew came back again for their third straight SDCC and they delivered big!  Lucas didn't want to leave so soon, so I had to set him straight.  These kids today! 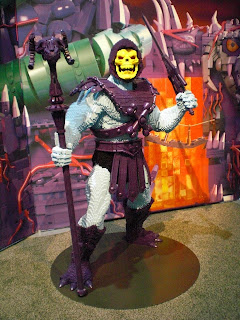 Mega Bloks are back yo!  Part of Mattel now, they're making Masters of the Universe sets in honor of He-Man's (GASP!) 40th Anniversary!  How big of a statement were they making?  They built this life-size Skeletor statue out of Mega Bloks and placed it right NEXT to the Lego booth, which was directly adjacent to Mattel!  Talk about firing a shot?!? 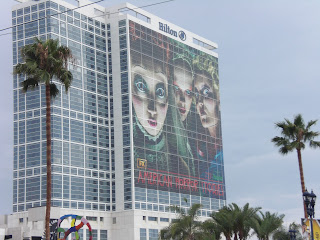 Not surprisingly, American Horror Story got the Hilton Honors this year and FX also came back with an offsite that was a bit different than what they've done in the past, but still fun.  Instead of a giant offsite with numerous activations where people could come and go as they pleased, FX had a giant maze built where fans could stop by numerous photo ops and activations as they made their way through.  They certainly upped the creepy factor by throwing dolls all over the place, but there were some funny bits to be found too, like the vampire dance club!  All in all, it was pretty smoothly run and most fans made it in each day! 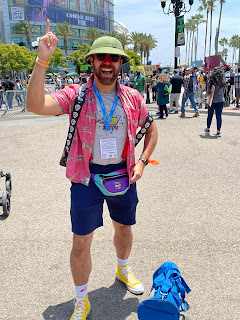 HEY HEY!!!  IT'S UNCLE MURPH FROM THE FOX KIDS CLUB!!!  If you weren't a kid in San Diego between 1990 and 1998, then this cosplay is totally gonna be over your head!  Uncle Murph was the mascot for the Fox Kids lineup on local station XETV.  In those days it was our original Fox affiliate, but these days the CW seems to air on it.  Uncle Murph introduced cartoons, held contests and promoted events all over Southern California!  I even saw him host an Irish Jig contest at a San Diego Gulls game on St. Patrick's Day in 1996!  It really is a pity kids today will never get to experience these simple joys.  Was fun while it lasted though! 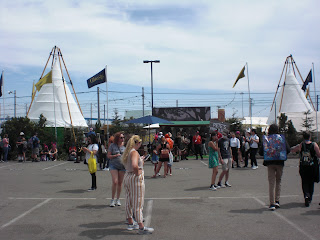 The Petco Park Interactive Zone was back, though greatly diminished.  Hard to say if this was out of COVID fears or companies just not wanting to go all-in anymore.  Probably a mix of both really.  I wound up only doing the Black Adam activation but I'm sure the others were fun too. 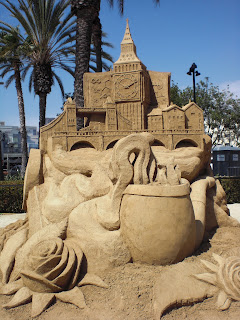 Audible had an interesting offsite.  No swag or anything, but there were some very impressive sand castles as well as charging stations that people could use while listening to samples of books on tape! 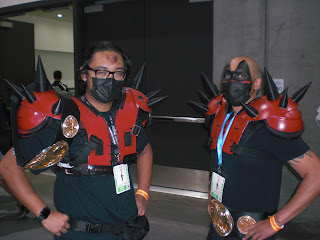 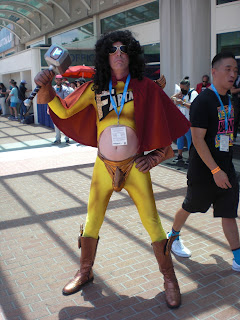 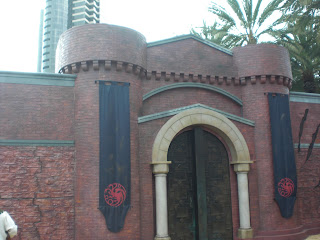 The House of the Dragon offsite.  This thing ruined more childhoods than divorce that weekend.  Poorly run and executed, many waited entire days without ever getting in.  Sorry, but I can't justify wasting a day at SDCC just see a tent with a few props and actors in costumes in it.  Immersive offsites can be awesome, no doubt about it.  But it shouldn't take THAT long to do!  One of these days, somebody's gonna figure out a steady middle ground. 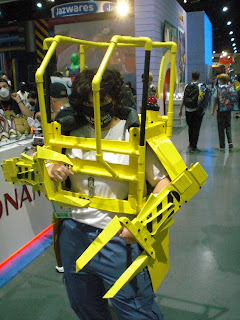 She's looking for the Queen! 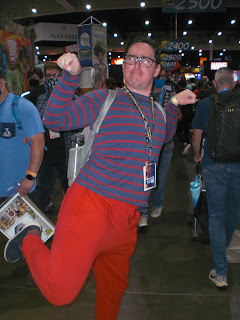 Artie!  Strongest man, in the world!  He kept watch over all the little vikings in the exhibit hall! 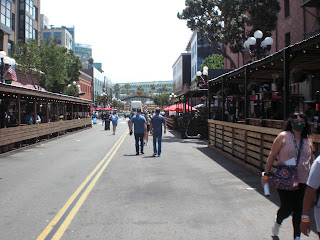 The Gaslamp Quarter wasn't quite as busy during SDCC this year, but crowds would eventually show up by the weekend.  We all really missed the SyFy Street Team this year and are hoping they'll be back in 2023.  Fingers crossed! 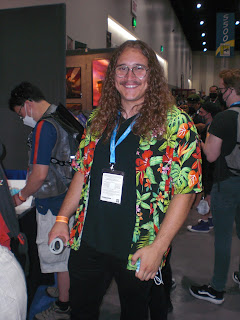 Would you look at that!  It's Weird Al Yankovic!  Or rather his stunt double!  The real Weird Al always moves in the shadows while his doubles draw away the crowds! 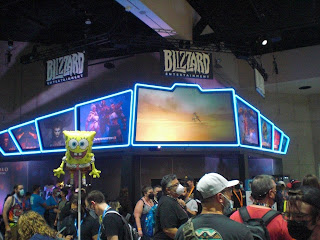 Lastly, we'll end things on the massive Blizzard Entertainment booth, one of the few I've never set up!  These guys had nothing on the booth that Funko set up at the opposite end of the exhibit hall, but it was kinda nice to bookend things with two monstrous booths at SDCC.
And that was Comic Con 2023!  It was a very long three years in between 2019 and 2022, but honestly, it felt like yesterday when I arrived to start loading it in the Friday before it started, like no time had passed at all.  There were a lot of changes though.  Some booths didn't come back, be it for COVID fears or, like in the case of DC/WB, budget cuts.  Others that did come back took a less is more approach, Hasbro being the most obvious example.  On the flip side, a few booths really blew things up, like Funko taking up half of Hall G!  Offsites were a mixed bag, as they usually are.  It's been a common complaint from me for years now, but others seem to be catching on too: Most offsite activations are NOT run very well.  I won't start naming names, especially since I already tagged a couple of them earlier, but there are ways to make it work so that everyone gets to see.  Twelve years ago when the offsites started, crowding issues hardly ever happened.  Maybe it's time to revisit those past experiences and see WHY they worked?  Over all though, I had a wonderful time.  Saw a lot of old pals that I hadn't seen in a good long while and discovered some awesome new books and comics too!  Taking my nephew Lucas with me was awesome.  He's getting older now, so the window of him thinking I'm cool is starting to shrink!  Glad I could show him the ropes a little.  I think more than anything, Comic Con this year, much like last fall's Special Edition, was a test.  Companies and fans are still wary of things, and rightfully so.  As of this writing, numbers have been very low in regards to COVID, which is good.  The overwhelming number of attendees and exhibitors were good about masking up, so hopefully it's a positive sign in terms of next year.  We'll just have to keep are fingers crossed and keep taking proper precautions.
And that is a wrap on the CRAZY Comic Con Countdown!  I can't even believe how fast it went by.  It's gonna be a long ten months before the countdown returns, but with any luck, Long Beach Comic Con and WonderCon will be wetting our appetites soon enough!  Next week, the art returns with a look at characters of the fantasy realm, so be sure to come back if you missed all that!  Until then, take care, stay safe and I'll catch y'all later!
Posted by jonsstuff at 12:00 AM