First off, sorry about the lack of updates lately. Work has actually been pretty light this month. As a result, I've been taking some time to work on my book as well as some other things that have needed attention, like sorting through all of my Comic Con Swag! (Yes, it takes that long to go through everything.) Although I do plan on posting weekly throughout October, I can't make any promises as my work schedule is definitely going to pick up during the next two months. Hopefully, everything will work out somehow.

Anyway, to make up for the last two weeks, I present to you my all-time favorite skit from Mr. Show with Bob and David: DRUGGACHUSSETTES! I'll go ahead and give everybody a fair warning: THIS CLIP IS NOT FOR KIDS! It actually isn't too terrible, no cussing or nudity or anything like that. But there is a lot of drug humor, so consider yourselves warned. In case you're curious, they are making fun of Sid and Marty Kroft's H.R. Puff 'n' Stuff and Lidsville, a pair of terrible shows from the 70's that were supposed to be for kids, but often had more of a following with college crowds. The Kroft brothers had a whole slew of shows throughout the decade, each more trippy than the last. If you've ever wondered what it's like to be high, just check some of these shows out on youtube, and you'll get a pretty good idea why you shouldn't do drugs (or you can just watch TNA every Thursday, both are pretty good examples).


For those of you who don't know, that's Tom Kenny stripping down to his tighty whities there as Prof. Ellis D. Trails. You may not know his name, but you've definitely heard his voice. He has voiced hundreds of cartoon characters, most notably Spongebob Squarepants.

Anyway, I'll be back next time with some new comics and a Halloween video to kick off October. Until next time, I'll catch y'all later!
Posted by jonsstuff at 1:27 PM No comments:

Hey folks! I'm posting a bit earlier than usually this week 'cause I need some time to work on my book. My style has evolved considerably since I first started. So much so that I now have to re-draw a bunch of stuff! Eh, if it needs to be done, than it needs to be done.

Anyway, I promised some truly terrible wrestling today, and I'd hate to keep you waiting. I have long contended that the Shockmaster is the worst gimmick ever done. A good argument can be made for the Gobbledy Gooker, but I'll take the shockmaster for the simple fact that he was meant to be main eventer. Do I think there were gimmicks that were even worse? Believe it or not, yes! If anything could top the Shockmaster, it'd be the Yeti. Who was the Yeti you ask? Let's go back a bit to find out.

The Dungeon of Doom was a magnet for crappy wrestlers. Created by longtime heel Kevin Sullivan as a means of destroying Hulk Hogan, the Dungeon was more a less group of goofy gimmicks that consisted of giants, fishmen, cannibals and even a leprechaun! Despite assembling such a motley unit, the Dungeon was never able to rid WCW of Hulkamania, much to the fans dismay. At Halloween Havoc 95, Sullivan decided to up the ante by introducing the Yeti (or Yet-ay, as Tony Schiavoni continually referred to him by).

A huge block of ice was wheeled out to the entance ramp as Hogan began to battle WCW champion the Giant (now known as the Big Show). As the match came to a close, a big melee ensued, at which point the Yeti broke loose, and turned out to be, well... a mummy. I guess the Turner brass didn't know much about their mythological creatures. To say it looked ridiculous would be an understatement, but things got worse when the Yeti hopped into the ring and proceeded to get freaky with Hulkamania!


Mere words are not enough to describe just how horrible this thing was. I don't know about you, but a mummy trying to violate Hulk Hogan is not my idea of good family entertainment! The Yeti didn't last too long and eventually resurfaced as Reese, a member of Raven's flock. The Dungeon of Doom, meanwhile, went the way of most mid-90s WCW gimmicks and disappeared after the nWo showed up. 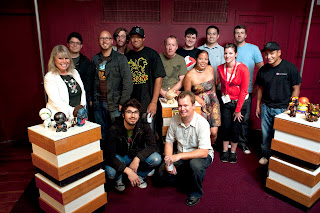 Hey folks, sorry about the delay. I had a busy week, working the Melissa Ethridge concert, as well as helping my good friend Tyrell Bodner out with his latest short film. It was an interesting shoot at a flower shop that gave me a chance to do some lighting for film, which I haven't done in almost two years! It also gave me a chance to reconnect with my old pals from San Diego State: Becky, Charlie and Isaac. It was a lot of fun and I now have a much greater appreciation for flower arrangement.

Anyway, for weeks now, I've promised to cover the Aftercon Art Show (pictured above) that I was a part of, so here goes. The Aftercon was a great event. It was a little nerve racking for me at first, being the least-known artist there. But everybody was very kind and gracious to me. Matt Lorentz, Mark Richmond and Wordell Brown, who organized the whole thing, are great dudes and were very encouraging (I had actually helped them set up the gallery the weekend before the show). Jason Reyes and Dave and Doreen Dotson were also very kind people, Doreen in particular. It must have been pretty obvious that I looked like a fish out of water, because Doreen kept me company pretty much the entire time I was there. She was very kind and sweet and even asked me to contribute to her sketchbook! (A hastily drawn Wonder Woman sketch in case you're curious) She made me feel a lot more welcome and encouraged me to join the Southern California Cartoonists Society (SCCS), which I did! I can't go any further without mentioning a couple of Aftercon attendees, Pete and Melissa. This kind couple went to check out the show, and thought highly enough of my work to ask me to draw their portrait in my style. I was very flattered and honored to be asked to do this by a couple of fans, and so it shall always be known that Pete and Melissa were the first people to ever ask me for a sketch and autograph. It was a great experience and I can't wait until next year's show.

If you're wondering why I didn't put more pictures of the Aftercon up, it's simply because I don't know what I can and cannot post in terms of other people's artwork. While it's easy to assume that everybody would be cool with it, I don't know for sure, so rather than risk getting a slew of threatening phone calls from people, I'd rather just let it be. If you want to see some of the other pieces, check out www.sheldorftribute.com or www.aftercon.blogspot.com. You can also check out my August posts to see my pieces again (Always a plus!).

Anyway, I think I've bored you enough for today. Enjoy the comics! 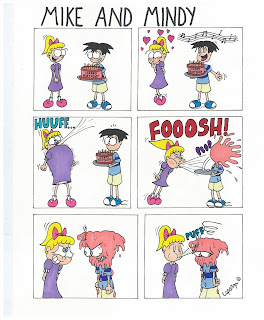 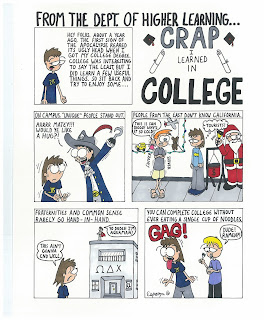 This piece was actually supposed to be in the book I'm working on right now, but since it's taking longer than expected, I felt I should post it while it's still somewhat relevant. The panels are pretty self-explanatory, except for the first one. You see, I started out at Southwestern Community college. One day while walking to class, I came across a dude dressed like a pirate. Given that it was at the Telemedia (Film) Department, it didn't seem all that odd. I figured he was part of somebody's project. That wasn't the case. It turned out he was just some crazy guy who dressed up like a pirate everyday and offered hugs as a way to spread world peace. I can't say he's been all that successful in his quest, but to my knowledge, he's still there!

Well, it's been great, but I got to get going. I got a special request from one of my subscribers to do a really bad wrestling post, one of Shockmaster and Gobbledy Gooker levels. Well, I'm always happy to oblige my fans, and I definitely have a gimmick of epically bad proportions in store for next time.

Until then, I'll catch y'all later!
Posted by jonsstuff at 12:18 PM No comments: