HEADIN' OFF TO ANAHEIM!!!

Hey folks, just a quick update today. I'll be heading to the Wizard World show in Anaheim this weekend, so I thought I'd post a few pics from last year's show. It's gonna be a great show this year and I'm really looking forward to it.
I have even more pics in my April 2010 posts, so enjoy these brief snippets. 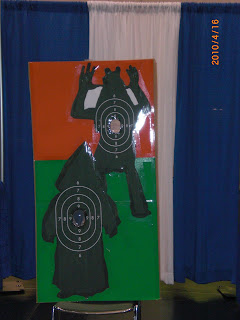 Ah, Jar Jar target practice! This booth was very popular with the attendees. 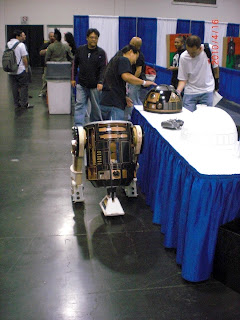 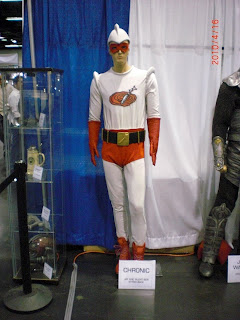 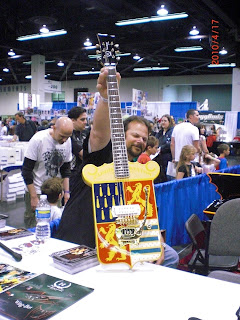 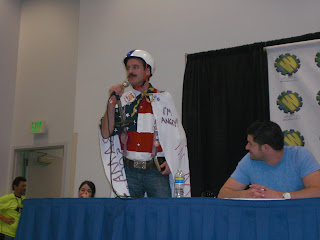 Captain Middle America, with the power to offend in a single sentence! 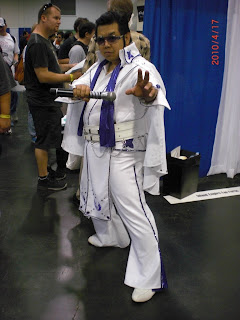 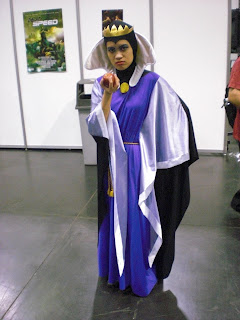 It's funny, but given that the Anaheim Convention Center is right across the street from Disneyland, you'd think there would have been more Disney-themed cosplay. 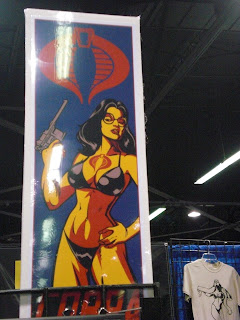 The Baroness. This one's for you Riki! 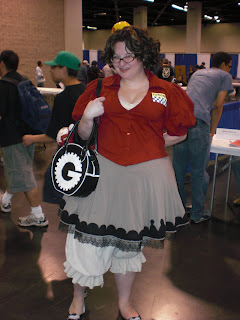 It was good to see MST3K get some cosplay love here. For all you youngsters out there, that's Mystery Science Theater 3000 for ya! 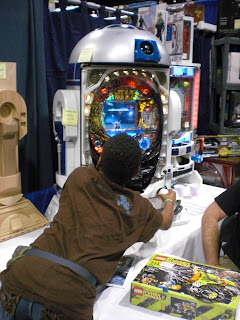 Another hobby group, only these dudes build custom pinball and pachinko machines based on fantasy and sci-fi films.
Well, that's all for now. Sorry for only posting a few pics here today, but like I said earlier, I already posted a grip of pics last spring. I'll be back next time with pics from this year's show, as well as all new comic adventures featuring Mike and Mindy and the Mushroom gang. Take care everybody, and I'll catch y'all later!
Posted by jonsstuff at 2:31 PM No comments:

HAPPY EASTER Y'ALL!!!
Just a short update today. I'll be heading north to Anaheim next week for the Wizard World Convention they do up there (actually, Wizard does these shows all over the country). It'll be good to get out of town for a few days and do the "tourist" thing. It's also a good chance to catch up with old friends like Matt Lorentz and Phil Yeh, while at the same time make plenty of new friends and spread the word about the joys of the destructive duo, Mike and Mindy. Long story short, I'm really looking forward to this trip.
I'd like to take a moment here to thank Karyl Miller and Lynn Stedd from the SCCS for posting the cartoon I did at the blood drive last week on the SCCS website. For doing it on the fly, I thought it came out pretty good! Karyl and Lynn are very nice people, and I look forward to the next blood drive. If you want to see the cartoon, it's been posted at the address below:
www.sccs-online.org
It's at the top of the page even, so check it out!
And now, a message from our sponsor:
The funniest thing about this video, besides the "initiation" bit, is the fact that it looks like an infomercial. This video comes from the sketch comedy troop "This Hour has 22 Minutes", which I think is based out of Canada. They certainly do have an early-90's Comedy Central/Kids in the Hall kind of feel to them. Regardless, their skits are hilarious and I highly recommend checking them out the next time you're on Youtube, with Toot-Tone and Bagpipe Hero being equally funny skits.
Well, that's all for this week. I'll be back next time with some pics from last year's Anaheim show, which really kicked ass! Until then, I'll catch y'all later!
Posted by jonsstuff at 4:34 PM No comments:

Wow! What a day I had. I was at the San Diego Blood Bank earlier today volunteering for the annual blood drive. Each year, the Southern California Cartoonists Society (SCCS) comes to the event to draw caricatures of the donors as they recover from donating blood. This was my first year doing it, and I had a wonderful time. I only did three three drawings, but the people really seemed to enjoy them. I even did a special Mike and Mindy splash page to commemorate the event. Hopefully, I'll be able to post it in the future (I did it on the fly and gave the cartoon to Karyl Miller, so I don't have a copy). I look forward to other events with the SCCS and hope to do more volunteer work in the future.
Obviously, the big news in wrestling this week is the sudden retirement of Edge, real name Adam Copeland. You know, it's real easy to say that wrestling is fake and that it's all spectacle. And indeed, the outcomes are in fact predetermined. However, there is still a lot of athleticism involved, and sadly, accidents do happen. Just ask Steve Austen, Sid Vicious and Darren Drozdov how fake it is. Edge, frankly, probably shouldn't have been wrestling these last eight years (it was 2003 when he first broke his neck), but he soldiered on and definitely left a mark on the business. Whether the fans loved or hated him (And believe me there were a couple of years there when he was the most hated man in the business, and not because he was a heel either!), Edge always delivered. It won't be the same without him, but I applaud Edge for having the courage to walk away before even more damage can be done to his body. Maybe now Christian Cage can finally get his shot at being the top dog in wrestling. We can only hope the bookers will get it right (nothing against Alberto Del Rio, but he ain't ready yet).
I decided to take a different approach this week, choosing to show Edge's WWF debut as opposed to something really goofy, of which there are plenty of funny Edge moments, like the time he, Christian and Kurt Angle formed a jug band! The ironic thing about this video is that his debut match last a little over a minute after Jose Estrada broke his neck early in the match (Estrada fully recovered and still competes in Puerto Rico).
Well, that's all for this week. Hope y'all enjoyed the post. Until next time, I'll catch y'all later!

Posted by jonsstuff at 8:31 PM No comments:

Hello Crazy Heads! After a week-long delay Mike and Mindy and the Mushroom gang are all back with a couple of new adventures that will hopefully bring some smiles to your faces. This first part of the year has been pretty wild so far. I haven't been this busy since my senior year of high school! All I know is that I am really looking forward to the Wizard World show in Anaheim this month. I need a break!

Anyway, that's enough rambling. On with the show! 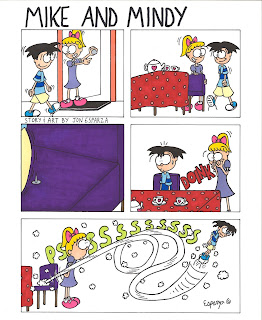 Just as I thought. I always new that kid was full of hot air! 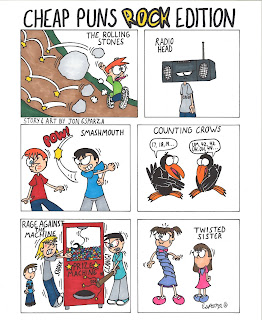 This is a new feature I'm testing out this week. If enough people like it, I'll probably do more "Cheap Puns" in the future.

Well, that's all for this week. I sure hope everybody enjoyed the cartoons. Next time it's Wrestling Week, and I'll be sure to have a real good gimmick ready for you fine folks. Until next time, I'll catch y'all later!
Posted by jonsstuff at 10:56 AM No comments:

Hello boys and girls and welcome to another edition of Jon's Crazy Stuff. On today's menu, I present a couple of belated April Fool's Day videos that will hopefully tickle your funny bone a little and make you forget that I didn't have enough time to complete my cartoons for this week.
Now that you've been seated, let's start with an appetizer, shall we?
Wow! I'm not sure what he said, but if the point of this was to scare kids away from smoking, chalk one up for the Warrior! This was obviously suppose to be an anti-smoking PSA that the Warrior did, and given that he has the Intercontinental Title belt, it was probably done sometime around late 1989 or early 1990. I'll let you folks decide whether this Public Service Announcement was effective or not. There were a couple of other PSA's that featured the Blue Blazer (Owen Hart) and the Rockers (Shawn Michaels and Marty Jannetty).
And now, onto the main course! (CAUTION: You might want to hold your breath after this one!)
This skit comes from the great Mr. Show with Bob and David, season two as I recall. According to Bob Odenkirk and David Cross, the shows creators (duh), this skit came about after the two were invited to Toronto to be a part of the city's comedy festival. Among the amateur performers was a guy who simply said something and then farted into the microphone. Naturally, the guy was a big hit with the Toronto crowd. To the other comedians, however, it was a huge gut check, since they had put so much time and effort into crafting their routines while this douchebag put five seconds worth of thought into his act and became the toast of the town! Having witnessed this ordeal, Bob and David decided to do a skit making fun of the gassy comedian, with the big payoff being that the farter gets out farted in the end! It's strange, but I always thought that it was a generally accepted rule that farting was funny.
Well, that's all for now. I'm really sorry about the cartoons not being ready. It may not seem like it, but it takes a lot of time to get these things done. I don't have any assistants or helpers, so my spare time is the only time I have to pencil, ink and color my comics, and lately, I haven't had a whole lot of spare time. On the plus side, I suddenly have a lot more money now to compensate my lost time.
With that being said, it's time to go and I promise that next time, there will be some new cartoons for your amusement. Until next time, I'll catch y'all later!
Posted by jonsstuff at 6:57 PM No comments: