THE HIPPO AND THE HIPPOCAMPUS!!!

Well, it's the final week of September and excitement's at an all time high!  Rather than drag this on, I'm gonna cue up some Earth Wind And Fire (September of course!) get straight to the art.  Sound good?  Great!  Let's do this!  Enjoy... 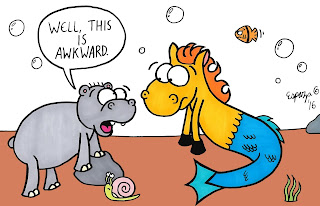 The Hippocampus.  Pretty much the horse equivalent of a mermaid, they don't get too many appearances in fantasy films.  Thankfully, Animal Alphabets respects them and gave them an entire day to be loved and admired by all!  Given that "Hippo" is part of their name, I thought it would be funny for it to encounter an actual hippo as the full name of "Hippopotamus" means "River Horse!"  See?  We learn something new everyday!  Hopefully the hippo is mindful of the little snail by the rock!

And that's a wrap on September 2019!  Hopefully y'all enjoyed more of these mythical creatures.  I plan to rustle up something spooky for October, so be sure to come back, especially next week as we kick things off with pictures from Long Beach Comic Con 2019!  Should be a blast!  Until then, take care and I'll catch y'all later!
Posted by jonsstuff at 12:00 AM No comments:

POTOO GRIFFIN FLOATS TO THE TOP WITH A BLOATED FAT RAT!!!

We are halfway past September CRAZIES!!!  I love this time of year so much!  Fall just has a magical way with me and I hope the season's been good to you all as well!  But hey!  It's art time!  So let's get to it, shall we?  Enjoy... 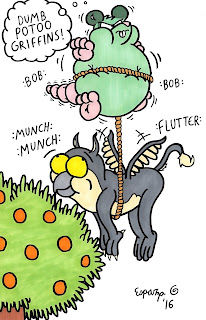 Those darn Potoo Griffins!  Or gryphons.  Gryffins?  Look, these creatures have like ten different spellings.  I can't keep track of them all!  Guess it depends on the cultural origin since many speak of them.  Today's theme again comes from Animal Alphabets.  Since Griffins were the mythical beast they chose, I thought I'd toss in a nod to my pal Cyndi Foster, the wonderful artist behind Oops, the tale of a boy and his rat, his big FAT rat, and the adventures they get into in a medieval world where griffins frequent the land!  The rat in question is Plague, a scoundrel in every sense who usually gets poor mute Oops in trouble.  Potoo Griffin, who's more or less Cyndi's mascot, is a young, silly griffin who's still discovering the world.  And because he's young, his wings don't quite work yet, so he puffed up Plague and road him to snacks galore!  Hopefully, Plague won't let his swollen pride get the better of him this time around!

And that's another week down.  We got one more then its October!  But we still gotta finish off September, so be sure to come back and we'll send the ninth month of the year off in proper fashion.  Until then, take care and I'll catch y'all later!
Posted by jonsstuff at 12:00 AM No comments:

And we're back!  Moving along here, we are now into week two of September and with any luck, I'm already putting the final touches on my Halloween builds and getting ready to set up my yard, though given past history, I'm probably way the hell behind on things and now trying to juggle 15 tasks at once.  Maybe this'll be the year it's only ten tasks?  We shall see.  Anyway, you came for some arts, and I happen to have some!  Enjoy... 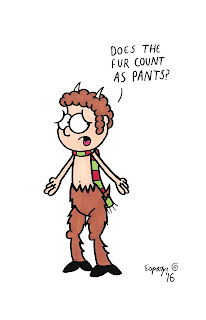 Hey hey!  It's Mr. Tumnus!  Narnia's nicest albeit somewhat creepiest resident!  Animal Alphabets strikes again here.  The theme was a faun, so I went with the one most people are familiar with.  Not sure if James McAvoy looks back on this role with fondness, but I'd like to think he does.  He's done many big things since.  Narnia was a stepping stone of sorts.  Now that Disney inadvertently has the film rights to Narnia again, part of me wonders if they'll continue the series or just start again from scratch.  The original films weren't bad, but there was room for improvement.  I will always be of the opinion that the rhino should've mashed more fools than he did when he charged into the White Witch's army!  Only time will tell I suppose.

And that's that!  But fear not!  Another post is coming next week!  And I think you all will find it quite uplifting!  Until then, take care and I'll catch y'all later!
Posted by jonsstuff at 12:00 AM No comments:

Welcome to September CRAZIES!!!  Fall has finally come and with it, all the things I love the most, like pie!  Cooler weather!  Pie!  Turning leaves!  Pie!  Halloween!  Pie!  Thanksgiving!  And of course, pie!  Did I mention that pie season is here?  Not sure if I got that point across.  Anyway, there will be plenty of time for that stuff in the coming weeks.  You're here for art!  At least I hope you are. It's kind of the reason I do this ya know!  Anyway, we're delving deep into the world of mythological creatures again and we're starting with a biggie!  So let's get to it!  Enjoy... 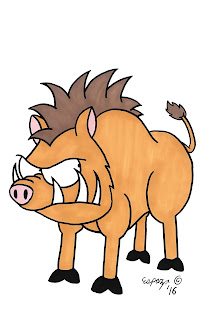 The Erymanthian Boar was not the kind of pig to mess with.  These beasts were massive and quite the terrors in Ancient Greece.  As one of his acts of penance, Hercules was tasked with defeating one and did!  The Ancient Greeks ate for weeks off of this boar's tender meat!  Being a carnitas junky myself, this porker would make me pretty happy if I owned a taco shop!  This art, along with all of the art coming this month, was originally part of Animal Alphabets' mythology theme.  Earlier this year, I explored a few of these themes and people liked them so much, I decided to do it again!  Trust me, it has nothing to do with me being pressed for time and the art already being done and needing few corrections!

That's all for today.  We'll be back next week with a familiar friend from the land of Narnia, so be sure to come back and give it a look!  Until then, take care and I'll catch y'all later!
Posted by jonsstuff at 12:00 AM No comments: