Last week of September!  Hopefully everyone's had a good start to the Fall.  I know all my favorite holidays are rapidly approaching here, and I especially hope to have a lot of fun this Halloween given some of the stuff I've been working on!  But that's all for another time.  Today, we celebrate the arts!  So let's get to it!  Enjoy... 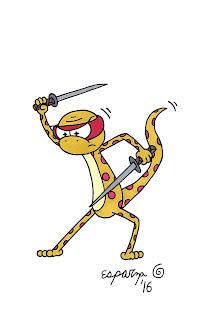 Another alphabetic animal from the Daily Doodle, Ninja Newt was a lot of fun to come up with.  He hasn't appeared in any comics yet, but I feel he will eventually.  Is he friend or foe?  Hard to say at this point.  I try to make reptiles and amphibians good guys in my comics because they are so unfairly judged in real life.  People freak out at the site of these animals and I really don't get why?  Would you run for your life if Kermit the Frog came your way?  NO!!!  Kermit is gentle and cute and wouldn't hurt anyone, much like a real frog!  So please don't be afraid of reptiles and amphibians when you come across them.  Most would rather get away from humans!

And we're done!  But fear not fellow CRAZIES, for I will be back next time with a rundown of Long Beach Comic Con to get October off to a fun start!  Until then, take care and I'll catch y'all later!
Posted by jonsstuff at 12:00 AM No comments:

Well, two weeks into September now folks!  Time flies don't it?  I'd give y'all a run down of how Long Beach Comic Con went, but since I wrote this post before it even happened, I have no idea how it was!  And if I try to BS my way through it, I could possibly cause a time rift and we don't want that do we?  Of course not!  So while we patiently wait until October's posts for some LBCC highlights, we'll go ahead and move along with some new art that'll hopefully prevent any kind of Biff-run dystopian future!  Enjoy... 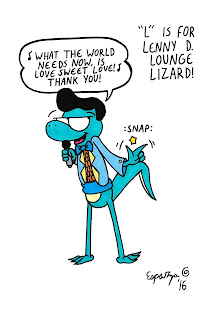 Every so often, the Daily Doodle would do some animal-themed posts with alphabetical help.  One particular day, a lizard was chosen and I decided to turn him into a lounge singer!  For those that were born after 1995, "Lounge Lizard" was a term typically given to performers that regularly played in hotel/bar/casino lobbies.  It's not a bad gig if you can get one really, but it tends to carry a rather sleazy tag with it because of the location of said gig.  Lenny wound up getting quite a few fans when his pencil art first appeared on Twitter, with dear pal Eline Wagemaker in particular demanding that he show up in the comics someday.  Well, this past June, the opportunity came and Lenny D wound up Hosting Critters Got Talent for the residents of the Crazy Forest!  This is his first color appearance though, and I gotta say, he looks dashing in his typical 70's-era blue tuxedo!

Well folks, that's all for today.  I'll be back next time to close out September with some art that slices and dices!  Until then, take care and I'll catch y'all later!
Posted by jonsstuff at 12:00 AM No comments:

Welcome to September CRAZIES!!!  This month's all about our scaly pals from the reptile and amphibian world!  If you've been following along with Bubble Fox lately, then you'd know that Bubble recently became a dad!  No, he and Willow didn't finally tie the knot.  He simply hatched a giant egg (After an intense battle with some rather desperate weasels!) that happened to contain a baby dragon, making for a BIG bundle of joy for the wily fox!  You may be asking "How on Earth did you decide that Bubble should have a son?  A dragon son no less?!"  Well, just keep reading along and you'll find out... 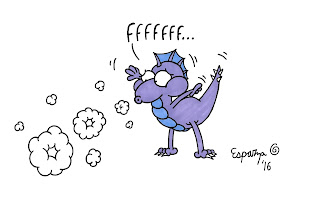 You see, the Daily Doodle one day put out a baby dragon theme.  I really liked the design of this little fella and thought he'd make a good addition for Bubble Fox.  The only real cosmetic change that I've made is that he now has a tiny pair of wings on his back.  Since Bubble had already done battle with a dragon, it made sense that such creatures exist in his universe.  And so the stage was set for a storyline that would span eight months, ending in May when little Pepper hatched and roasted the dastardly weasels away for good!  How did he get the name Pepper?  You'll have to read the comics to learn that answer! (HINT)  As for his colors, I hadn't really decided on it until a recent guest comic from Dawn Griffin convinced me that purple was the way to go!  I've also considered the notion that he can change colors since he is reptilian.  It's a black and white comic, so color's kind of a moot point really!

Well folks, that's all for today.  I'll be back next time with a guy that personifies the phrase "Lounge Lizard!"  If you happen to be in Long Beach this weekend, stop by the Long Beach Comic Con and come say hi!  I won't have a table this year, but I'll be walking around all weekend seeing the sights and catching up with old pals while making new ones!  It's always a ton of fun and, weather permitting, is usually a cosplay hotbed!  Anyway, take care and I'll catch y'all later!
Posted by jonsstuff at 12:00 AM No comments: 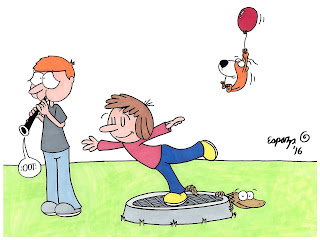 Richard Thompson was a truly amazing cartoonist.  So few of us are able to capture the wonder of childhood, the drudgery of adulthood and the absurdity of life in general in a single strip as well as he did.  His strip, Cul De Sac, was by far one of the greatest comics to ever grace the funny pages.  It was a crushing blow in 2012 when Parkinson's Disease forced Mr. Thompson into retirement so he could undergo treatment.  We hoped he'd get well again someday and return to the funnies to give us all our badly needed dose of Alice dancing on her manhole cover.  Sadly, it never happened.  On July 27, 2016, just days after the world gathered in my hometown to celebrate comics, Mr. Thompson passed away.

I never met Richard Thompson in person, although I did have a few chance interactions with him on Twitter.  Early on when I started on that site, I had mentioned one day how I wished my local paper, The San Diego Union-Tribune, carried Cul De Sac.  About an hour later, he tweeted me back, thanking me and jokingly asked if he could crash on my couch during Comic Con!  He wound up not making it that year (because of his illness), but he would've been more than welcome to the sofa in my home.  At that moment, I didn't even know he was ill.  I just knew he did a comic that I absolutely adored and couldn't get enough of.

The art in today's post was made in honor of Richard Thompson and his wonderful characters.  The piece at the top of the page was for the Team Cul De Sac art auction that Chris Sparks hosts every June at HeroesCon in Charlotte.  I drew this piece back in May and included my three favorite characters: Mr. Danders, the wily guinea pig always looking to make a quick get away; Petey, Alice's neurotic older brother always trying mightily to get a grip on his oboe; and, of course, Alice, a wonderfully imaginative, pangolin-obsessed little girl who looks at every manhole cover as her own personal stage.  I don't know if this piece sold to be honest, but it is one of the things I'm most proud of.  Coloring the grass on this piece wasn't easy, but it was worth the effort.

After word of Mr. Thompson's passing reached, I did another bit of art... 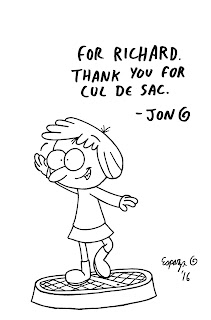 Most of Cul De Sac was in black and white, one of the qualities that added so much to the comic's charm.  That's why I opted to forgo colors on this one.  I liked the simplicity of it.  That's why I liked Cul De Sac so much.  It wasn't full of political satire, wacky antics, grotesque violence or disgusting bathroom humor.  It was just simple fun.  In a very complicated world like today, simple is always a welcome change.

I never knew Mr. Thompson, but I knew his work and knew it was very good.  I know he is in a better place now and I know he made this world better for having been here.  I urge any who want to help fight Parkinson's Disease to check out the Team Cul De Sac site to learn more.  But more than that, I want to thank Richard Thompson for being such an amazing artist and for bringing so many smiles during his time here.  And thank you Richard for giving us Alice, whom I will always see dancing whenever I pass a manhole cover.

-Jon Esparza
Posted by jonsstuff at 12:00 AM No comments: