THE DAY HAS COME!!!  Well, tomorrow anyway, but I can guarantee that right now I'm making my stuffing and will already have my pecan pie made for tomorrow.  It's a cramped kitchen, so some things have to be made, and scheduled, well in advance at CRAZY HQ.  Speaking of cramps, I'm sure the Brat Twins are feeling some right now.  Hard not to when you have about 50 cubic yards of helium pumped into you!

Tom Turkey's escape this year has been an epic one!  He went from sure capture to calm stalling to turning Dorothy and Billy into living blimps in an effort to be "Help" them hold more food!  As always, Tom is trying to think several steps ahead.  Usually he's having to keep an eye behind him, but on this day, his eyes turn to the skies.  Did Tommy's plan work?  You'll see very soon!  Enjoy... 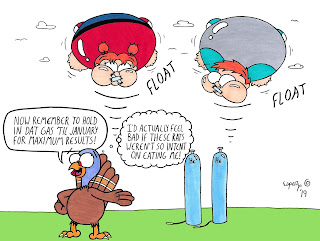 And they're off!  And because these kids are dumber than a brick, they'll probably follow Tom's suggestion and keep the tape on until January; AFTER turkey season has long passed!  It seems Ol' Tom Turkey saved his neck again and found his laughing place, because he's off the menu and Dorothy and Billy are full of hot air!  His trickery has literally reached new heights!  Congrats Tom Turkey.  You got away again thanks to a "Swell" idea!

And that's a wrap on November and this terribly tricky tale!  I hope you all enjoyed it.  I was having so much fun with the art on this one, I've decided to make a whole picture book out of it with added gags and background!  Obviously, it won't be out for a while, but I'll be sure to keep everyone posted!  Next week, a new month starts and it's gonna be very merry!  So be sure to come back!  And as it is now the holiday season, I want to take this time to urge you, dear readers, to think of others at this time of year.  Food, toy and clothing donations are largely open now and it doesn't take much to make a big difference.  Take care and Happy Thanksgiving!  Have a fun and safe day with your loved ones.  Until next time, catch y'all later!
Posted by jonsstuff at 12:00 AM No comments:

One week to go until Turkey Day CRAZIES!!!  Got a lot of prepping to do!  Hopefully by now I will already have my cooking supplies bought and sorted.  In the meantime, I need to get my episodes selected for my own custom MST3K Turkey Day Marathon AND buy some bigger clothes!  I'll certainly need them by Thanksgiving night!  Certainly Dorothy and Billy Brat seem to know where to find some good, stretchy clothes!  Perhaps I should shop at the same store?

As we edge closer to the conclusion of our tale here, we find Ol' Tom Turkey once again at the hands of fate as the Brat Twins had him in their grubby clutches.  But Tom was able to stall them, pointing out their scrawny frames could never contain a bird as big as he!  The wheels are turning.  Did the boisterous bird find a solution?  The answer awaits down below!  Enjoy... 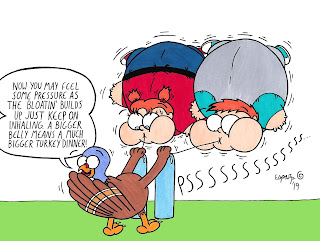 He did indeed find a solution!  Belly stretching is quite important if you wanna hold more food in, but I think Tommy's intentions here a little too helpful.  Those Brats could fit a few turkeys in this bloated frames now!  Provided they can open their mouths without a wave of gas blowing them away!  Tom's really got a full plate here!  Or rather, full twins!

And that's all she wrote for this week.  We'll be back next week to wrap things up and see if the Brat Twins' expansive procedure worked out for them.  Either way, I think we'll all have some big laughs over the finale, so be sure to float on by!  Until then, take care and I'll catch y'all later!
Posted by jonsstuff at 12:00 AM No comments:

And we're back!  As we inch closer to Thanksgiving Day, let us remember that it's the smaller things in life that we should truly be thankful for.  Things like the pencils we write with or the cups we drink out of.  And let's not forget the pants we wear that keep our legs warm and hide the embarrassingly silly novelty undies we bought because they looked funny on the rack.  Yes, there's much to be thankful for at this time of year.  Unless you're a turkey!

As we saw last week, Tom Turkey took all of a second to be cornered by the vicious Brat Twins, who wasted no time in licking their chops!  Things are already looking bleak for the portly bird.  Can this gobbler pull off another miracle this year?  Only one way to find out!  Enjoy... 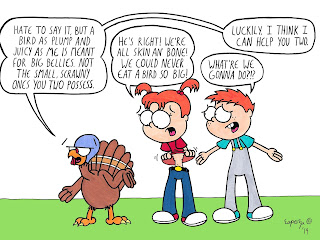 Reverse psychology...  If there's any pair this would work on, it's certainly the Brat Twins!  Dorothy and Billy are formidable foes for sure, but they have one key flaw: Neither one of them are particularly bright!  Turkey's as a rule aren't either, but Tom is no ordinary turkey.  He's as clever as they get and seems to have uncovered the Brat Twins' biggest weakness.  How will he exploit it?  That's a tale for another day.  A Wednesday to be precise...

Two down, two to go!  Tom's not in the clear yet, but he's bought himself some time, and that's a huge advantage with these dumb kids!  Part three is next week and the stakes will only expand further!  So be sure to come back and give it a look!  Until then, take care and I'll catch y'all later!
Posted by jonsstuff at 12:00 AM No comments:

Welcome to November CRAZIES!!!  Now that you're all starting to come down from your Halloween candy binges, it's time to start bracing ourselves for some MORE food-induced traumas, for Thanksgiving is on the horizon!  And who better to celebrate Turkey Day with than Tom Turkey himself?  Joel Hodgson?  Well, yeah, of course the creator of MST3K would totally be my go-to as well, but he ain't available, so Ol' Tommy Turkey it is!

As you know by now, poor Tom Turkey is always in high demand this time of year, and not just because of his saucy limericks about a man from Boston.  No, he's in much higher demand as a menu item, sadly, and this year is no different.  Last year, he and his friend were nearly captured by the vile Brat Twins, Dorothy and Billy, in a scam that Tom himself had caused no less!  But thankful, the "Winds" of fate were on Tom's side, and they narrowly escaped!  The Brat Twins are back though, and hungrier than ever!  Will Tom escape this year?  Scroll down and see how it all starts!  Enjoy... 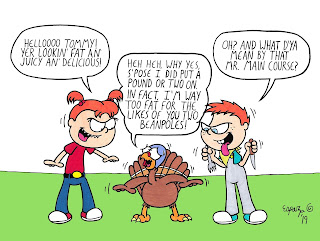 Boy, it sure didn't take too long for Ol' Tom Turkey to get himself cornered by the Brat Twins!  Dorothy and Billy aren't messing around this time either!  They're poised to eat him raw!  Tommy's doing some fast talking, but will it be enough to get him out of this mess?  You'll have to come back next week and see!

That's all for today.  Be sure to come back next week and see how the second part of this four-part adventure unfolds.  Who knows what card Tom will pull from his feathered sleeve?  Until then, take care and I'll catch y'all later!
Posted by jonsstuff at 12:00 AM No comments: