Whoa! It's been a while since I posted on consecutive weeks. What can I say? It's been dead busy for me. I've only had one day off in the last ten days. Still, it's nice to know that I'll at least have some money to spend at Comic Con this year. Speaking of which, I should give a little more info about the AfterCon event. It's being held at the Suture Gallery at 655 10th Avenue in Downtown San Diego. It's several blocks away from the Convention Center in between G and Market Streets. A word to the wise though: the building isn't marked, so it's really easy to miss. It's on 10th Avenue, right across the street from a steakhouse and a bowling alley. It'll take place July 22-24 from 8:00pm to 12:00am. I hope this info has been helpful. It should be great!

Anyway, it's been a year now since Michael Jackson passed away. There are many mixed emotions associated with the "King of Pop." Obviously, the man's personal life was anything but stable. On the other hand, he was a phenomenal performer who really set the bar, especially when it came to the art of the music video. When MTV first came out, music videos were more or less taped concert footage or a band on a sound stage mimicking their songs. Jackson, along with Madonna, Peter Gabriel and the Talking Heads, really broke down the doors in realizing what a music video could be.

He made so many great videos, it's hard to pick just one, but I'll go with Leave Me Alone, simply because it was animated, not to mention catchy as all get out.


The video was directed by animator Jim Blashfield, who had won an Oscar for his short Suspicious Circumstances. The film was popular among the art and music communities, eventually catching the attention of Talking Heads front man, David Byrne. This led to Blashfield directing the video for the Talking Heads song And She Was (a future post I can assure you). Jackson loved the Talking Heads video, and brought Blashfield in to direct Leave Me Alone, which leads us to today's post. There's much more to be said about the animation process here, but I don't like to over-analyze things. I suppose if anybody is interested, contact me and I'll cover it in a future post. In the meantime, enjoy the video.

Well, that's all for now. Time permitting, I'll be back next week with some new adventures for Mike and Mindy. Take care y'all! Later!
Posted by jonsstuff at 7:42 PM No comments:

Well, it's been a long couple of weeks, but I'm back. Besides being busy with work, there was also the recent family emergency that had me preoccupied. I've had my time to grieve, and although I am still saddened, I know I have to move on. My cousin was the best at making people laugh, so the best I can do is carry on that tradition. I just wish I was as good as he was at it.

Anyway, here are the comics. I hope y'all enjoy them and I'll catch y'all later! 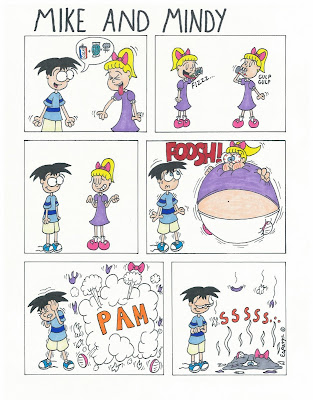 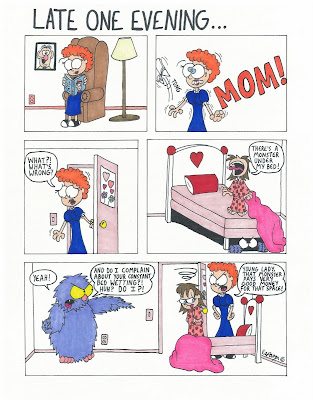 Posted by jonsstuff at 6:57 PM No comments:

Normally, this week would be "Comics Week" here at the stuff, but some recent events have postponed them until next week. It is with great sadness that I announce the passing of my cousin, Ivan Santana, 31. Ivan was an easy going guy who loved music, painting, video games (He had every system and console ever made!) and Gundam robot kits. Sadly, he also had some issues with mental illness and substance abuse that often led to him doing some bad things. In recent years, however, he made attempts at getting better and even reconciled with his family. Admittedly, I hadn't seen Ivan in almost eleven years, but I always prayed for him and hoped he would get better. I know now that he is in a better place and probably chilling with our Tio Jose. The lasting impression I will always have of my cousin is his smile, because he always had one. Never in my life did I see him frown, yell or even threaten anybody. Even now when I think about him, I don't think about how sad it is that he's gone. I think about all the awesome times I had with him; wrestling around, going surfing, playing hide and go seek or just plain hanging out. He was always able to cheer me up, no matter how down I was and I thank God for giving me the chance to know and get close to him.

Where ever you are Ivan, and I see you sitting on a cloud somewhere tinkering with one of your Gundam Models, just know that your cousin loves and misses you.
-Jon

Ivan loved "Weird Al" Yankovic, so in his honor, I present his best video "Headline News", a send up of a bunch of goofy crap that happened between 1992 and 1994. "Mike and Mindy" and their One-Shot Pals will back next week. Take care folks, and always remember to love and look out for one another. You only get one shot at life, so make it count.

Posted by jonsstuff at 11:41 AM No comments: