Howdy folks!  Gotta very special comic today!  For the first time ever, Bubble Fox has been guested!  And who was cool enough to give that gassy fox his first guest strip?  The super awesome Dave Craig of the hilarious Horovitz Comics!  So sit back and enjoy the "Bubbly" goodness! 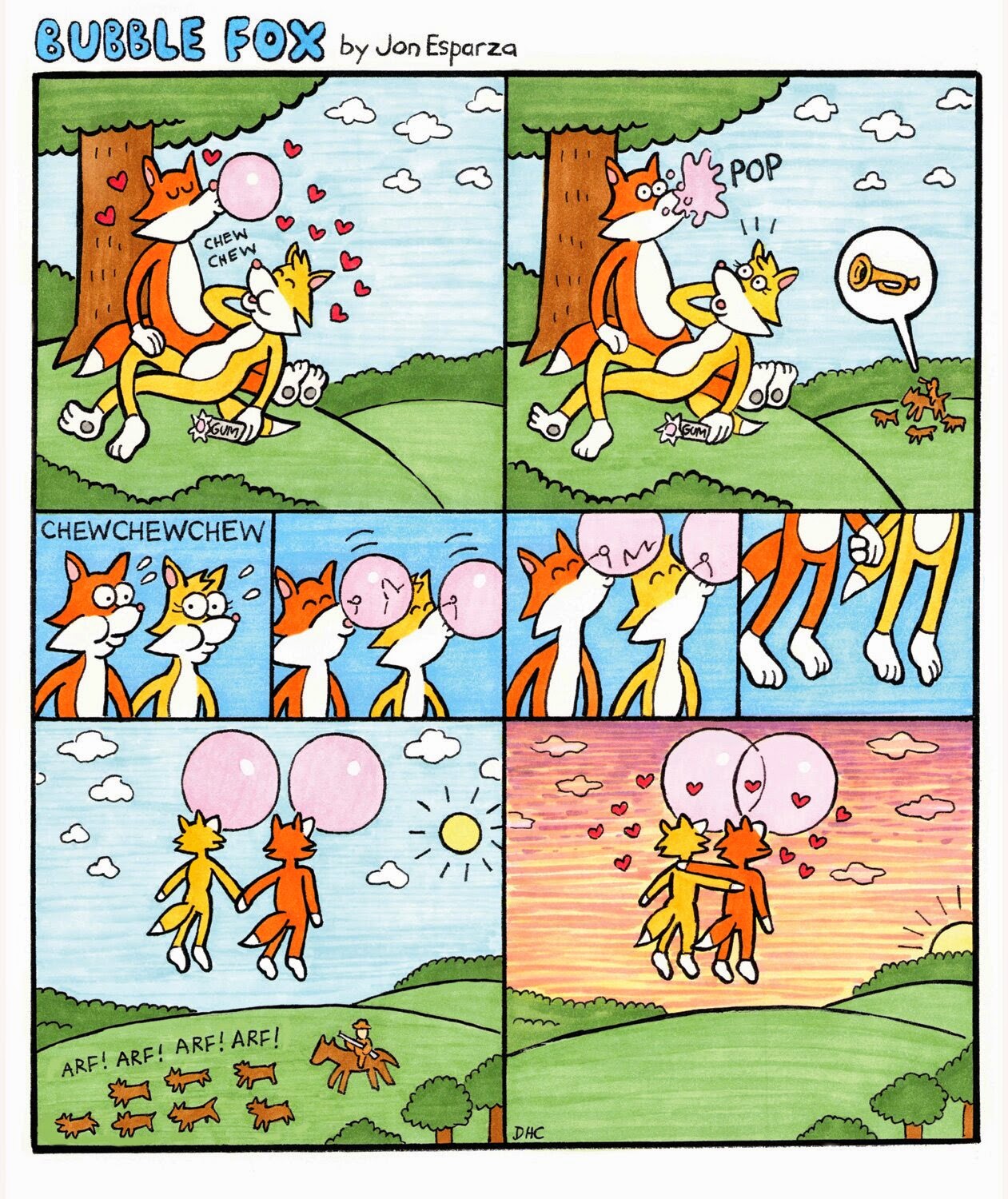 Cunning and crafty... What all foxes are known for.  Bubble and Willow have an interesting relationship that just continues to blossom.

Toronto's Dave Craig is a hilarious cartoonist.  Much like Crispin Wood of Small Blue Yonder, I put his comics on par with Gary Larson's The Far Side as just being insanely funny!  He's a true master at nailing the absurdities of life and the world around us.  He's also become a huge fan of Bubble Fox and asked me a while back if he could do a guest strip.  Luckily my brain was working that day and said yes!  As a result, I now posses this beauty!  Thanks so much Dave for taking such good care of my foxes!  To see more of Dave's hysterical comics, click here! (Warning: A few mature comics there, so teens and older!)

I gotta say, the response to Bubble Fox has been amazing so far!  I really can't believe how popular it's gotten in such a relatively short amount of time.  It's certainly gonna soften the blow when Mike And Mindy and Mushrooms end in December.  Having social media to promote from the start has certainly helped.  I think using a platform like ComicFury instead of Blogger has also been a boon.  Nothing bad on Blogger though.  This site has been wonderful and is still the easiest setup you'll find anywhere.  But ComicFury's homepage actively promotes its user's comics in several different ways.  My only gripe really is that it's not easy to customize.  I tell ya, the first programer to take ComicFury's platform and combine it with Blogger's customizing ease is gonna make a fortune!

Well folks, that's all for this week!  I'll be back next time with a New Mike And Mindy that'll be a "Monstrously" good time!  Until then, take care and I'll catch y'all later!
Posted by jonsstuff at 12:00 AM No comments:

Welcome back CRAZIES!!!  Just a short update today.  Was hoping for a guest strip, but looks like things are a bit delayed on that front.  Luckily,  the Stanley Cup playoffs are in full swing, and my old pal Warren Frantz of Off Season happen to send in some great Mindy fan art! 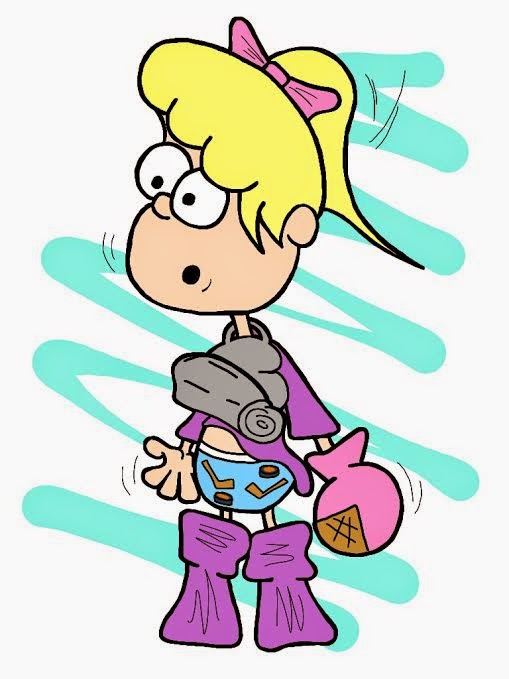 Even in May, Hockey's in bloom... BLOOMERS that is!  Mindy is quite proud to show these off!  Thanks again Warren!  Mindy will be adding these to her "Wall Of Bloomers" very soon!

Well folks, that's all for this week.  Hopefully I'll have some more Guest Fun next time.  Until then, take it easy and I'll catch y'all later!
Posted by jonsstuff at 12:00 AM No comments:

Another week, another comic!  This one should actually be "ROCK PUNS VOLUME 4," but, eh, it's still a Mushrooms strip when all's said and done, so sit back and enjoy the CRAZINESS! 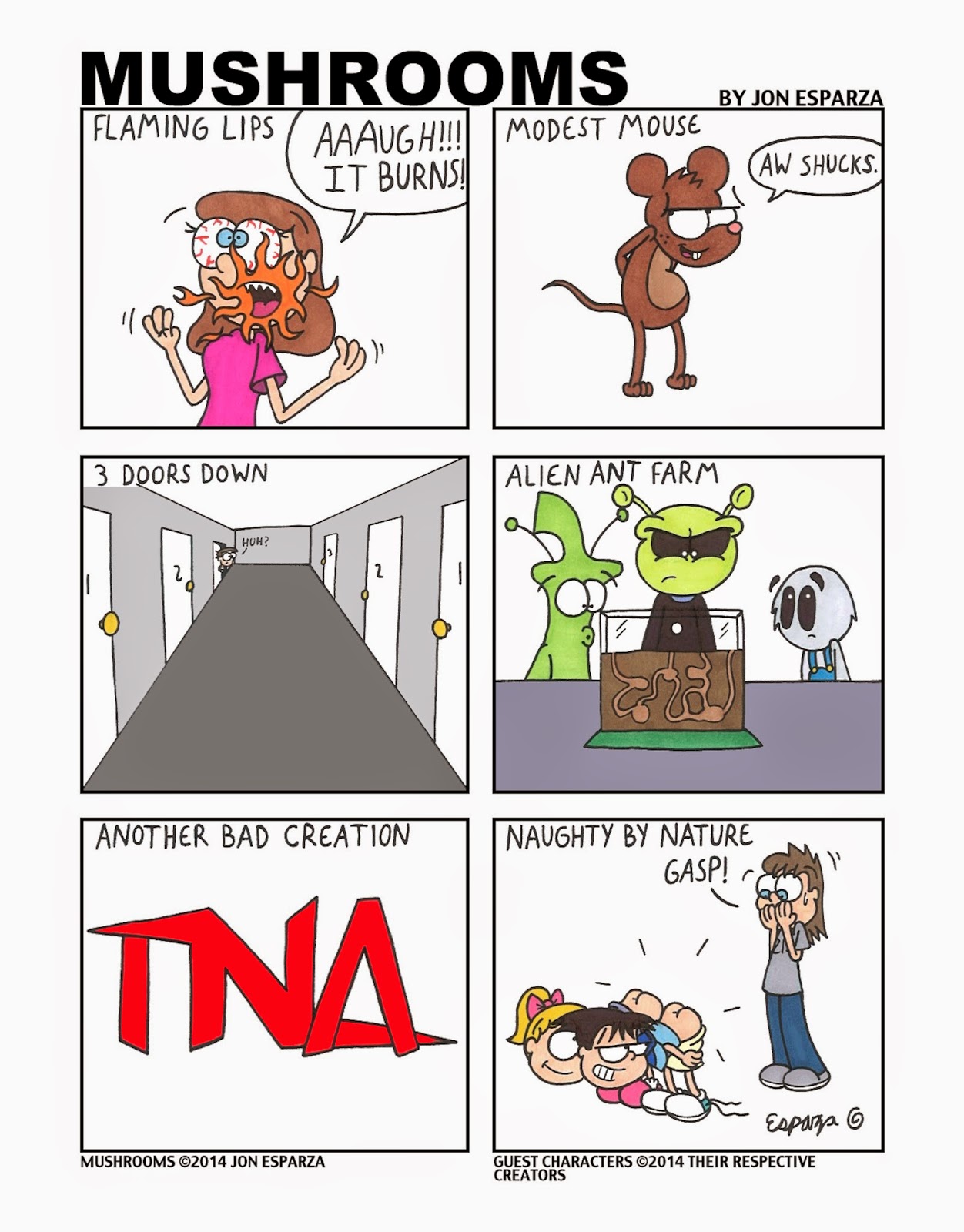 Sheesh!  I hope the real Flaming Lips have a less horrific origin than that!  I've never even heard of Modest Mouse, but I couldn't let a good pun go to waste!  And I'm fully aware there are six doors in that third panel, but it's all symmetrical.  And panel four has some special guests from three of my favorite comics: Goober from Daniel Barton's Goober And Cindy, Ralf from Scott Lincoln's Ralf The Destroyer and Tawee from Eddie Pittman's Red's Planet!  I know the TNA bit is a low blow, but seriously now, has anything they've done in the last four years given anybody any reason to think otherwise?  And lastly, those twerps are as naughty as they come!  I'll be having nightmares for weeks now!  Guess I had that one coming though.  Nasty little buggers!

So ends another week of CRAZY.  We'll back next time with some Guest CRAZINESS to entertain the masses.  Until then, take care and I'll catch y'all later!
Posted by jonsstuff at 12:00 AM 1 comment:

MIKE AND MINDY: "DROPPING" LAUGHS ALL THE TIME!!!

Welcome to May!  Been a pretty wild few weeks between WonderCon, getting sick and turning the dreaded 3-0!  As it turns out, being 30 ain't that big a deal.  Just means now I really don't have an excuse for not knowing any better!

It's a big update today, so let's "Drop" right into it with a New Mike And Mindy!  Enjoy... 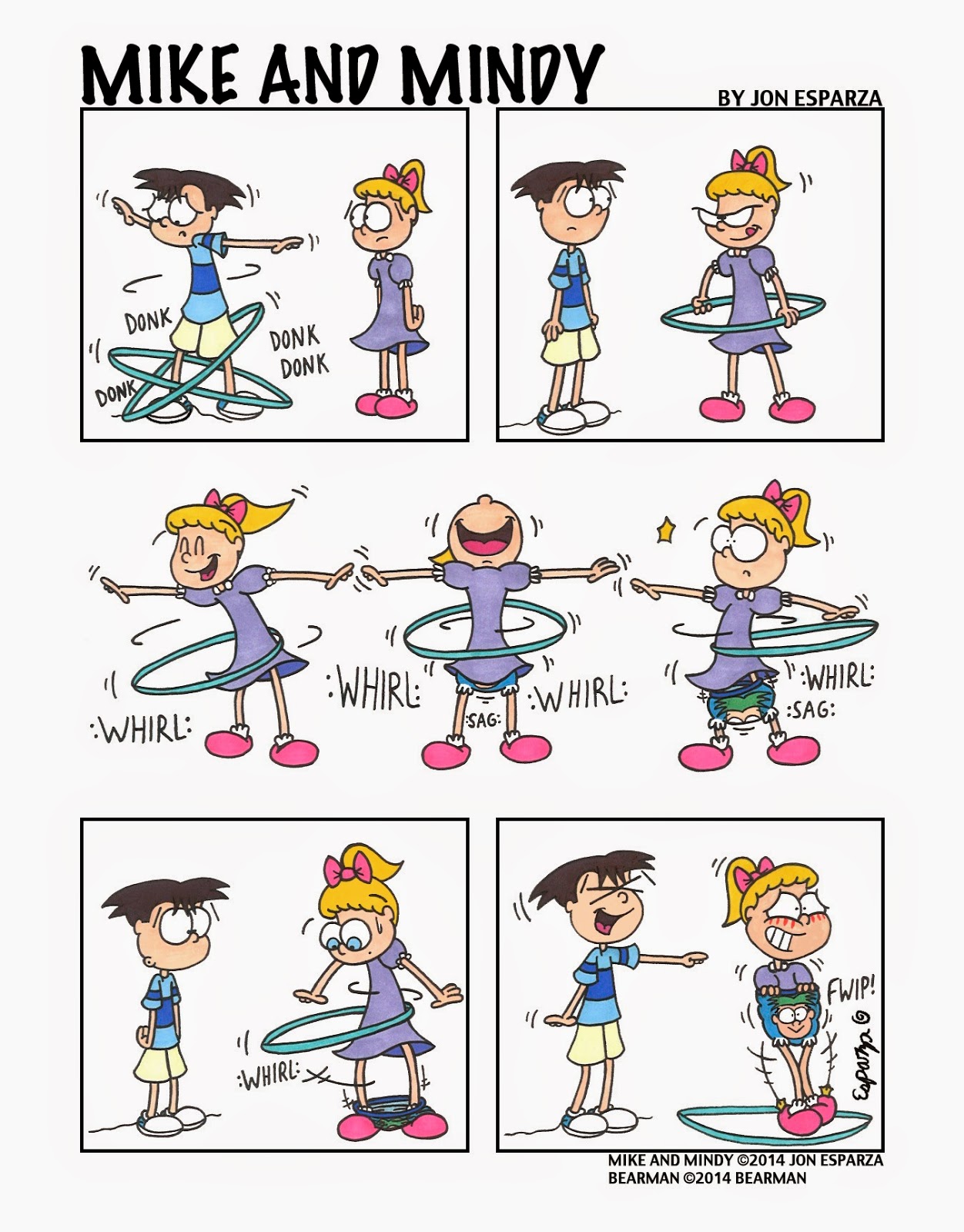 Hey look everybody!  It's "Droopy Drawers!"  Kidding, kidding.  Guess hula hooping really is slimming!  If you're curious about the face on the bloomers, it belongs to the great Bearman of Bearman Cartoons, as seen below...

Every year, he donates to charities based on how many cameos his character makes!  This guy really gets around and has already appeared in a few strips this week!  To find out more about this great cause, click the link here!

And now, as promised, here's a look at WonderCon 2014.  Gotta be honest, it wasn't a successful weekend for me, so if it's OK, I'll just stick to the photos.  Enjoy... 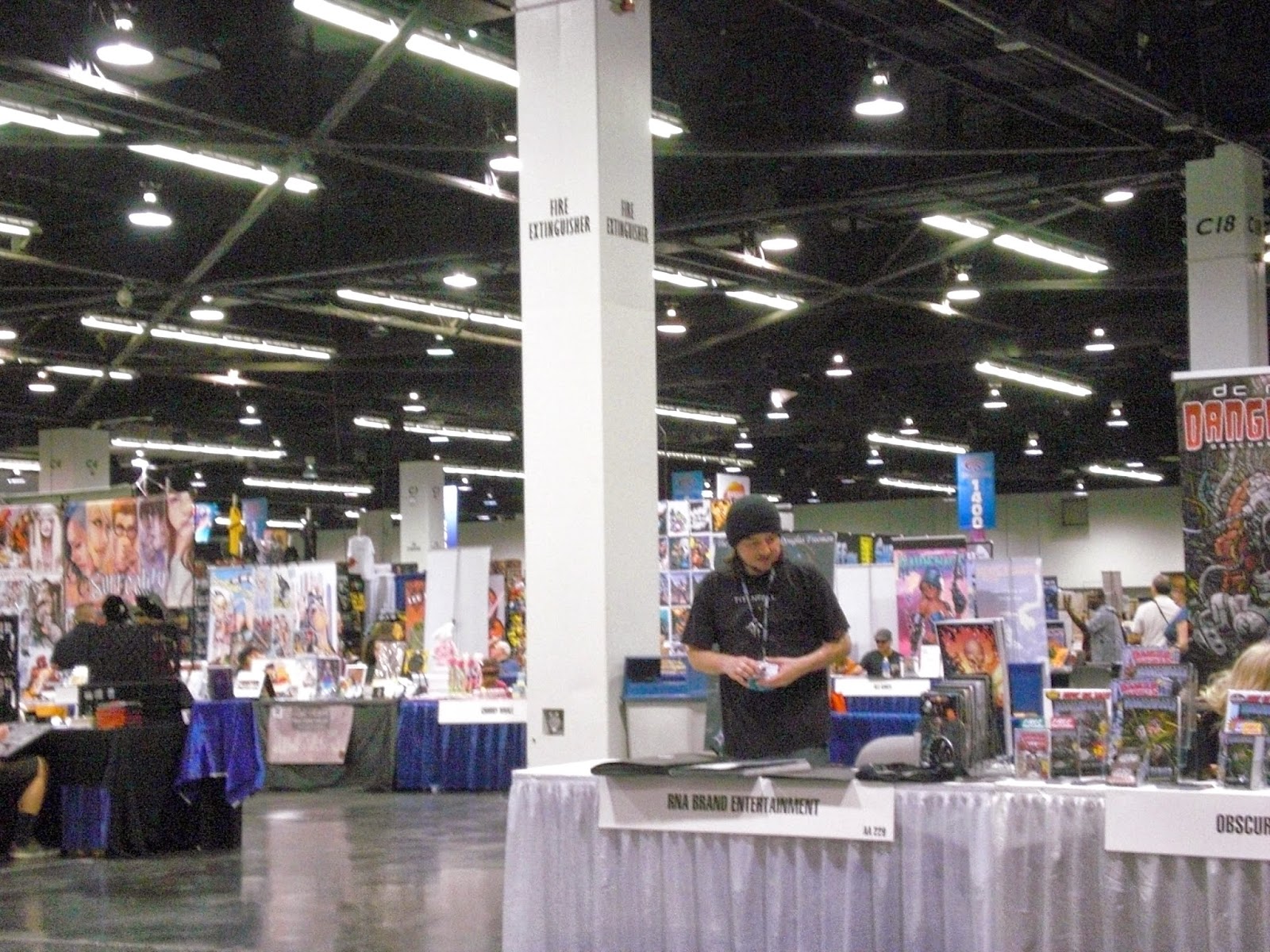 The view from my table.  Not much traffic came our way.  The isle was really wide, almost like it was repelling people from coming through. 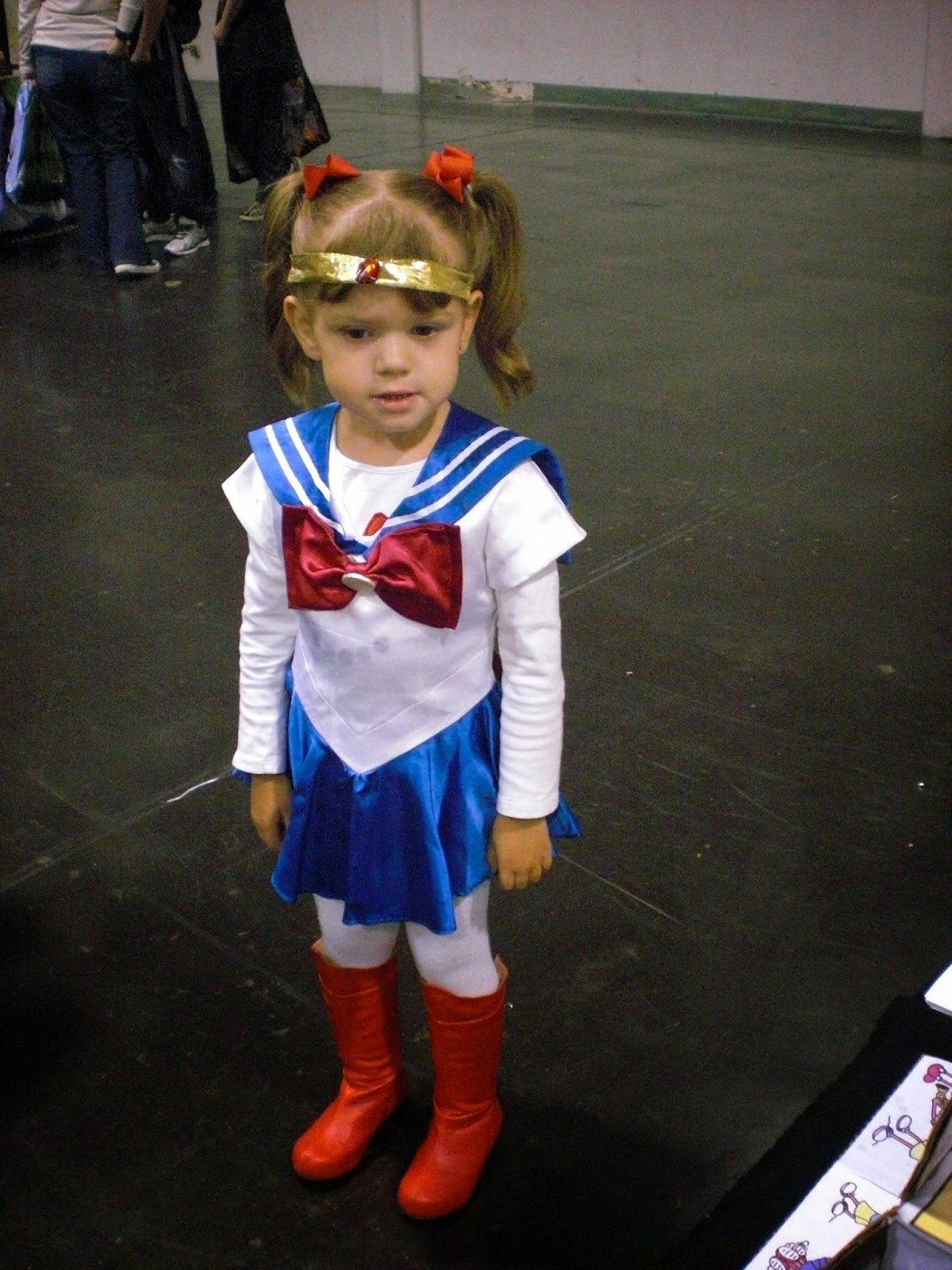 You'd have to be heartless not to have said "AWWWWW" at the sight of the most adorable Sailor Scout ever! 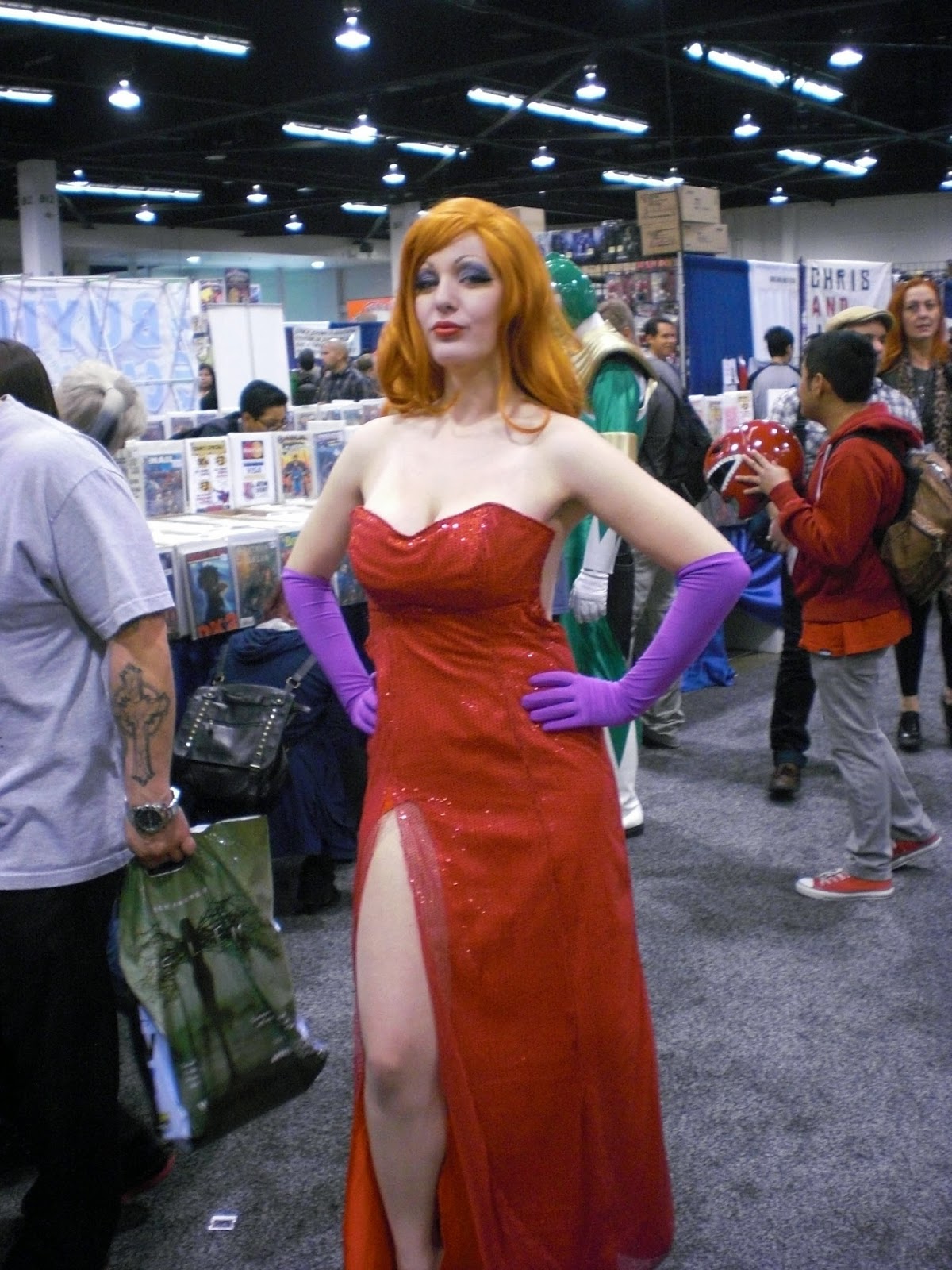 Roger is one lucky rabbit!  Somewhere, I'm sure Eddie Valiant is smiling. 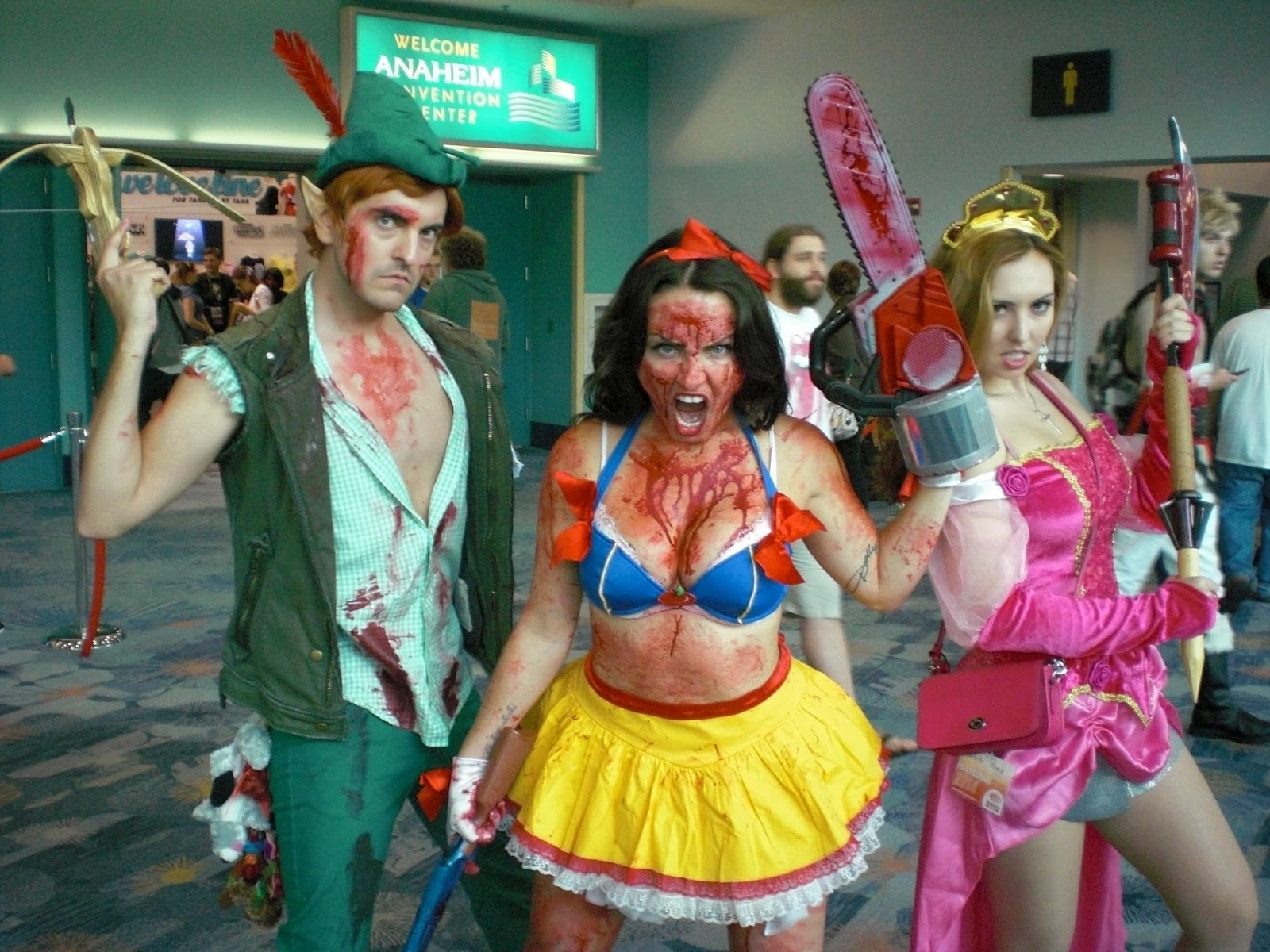 Snow White Ash!  She said I was the first person to get it!  Granted, Evil Dead really is more of a cult thing, but honestly now, how many other characters out there have chainsaw hands? 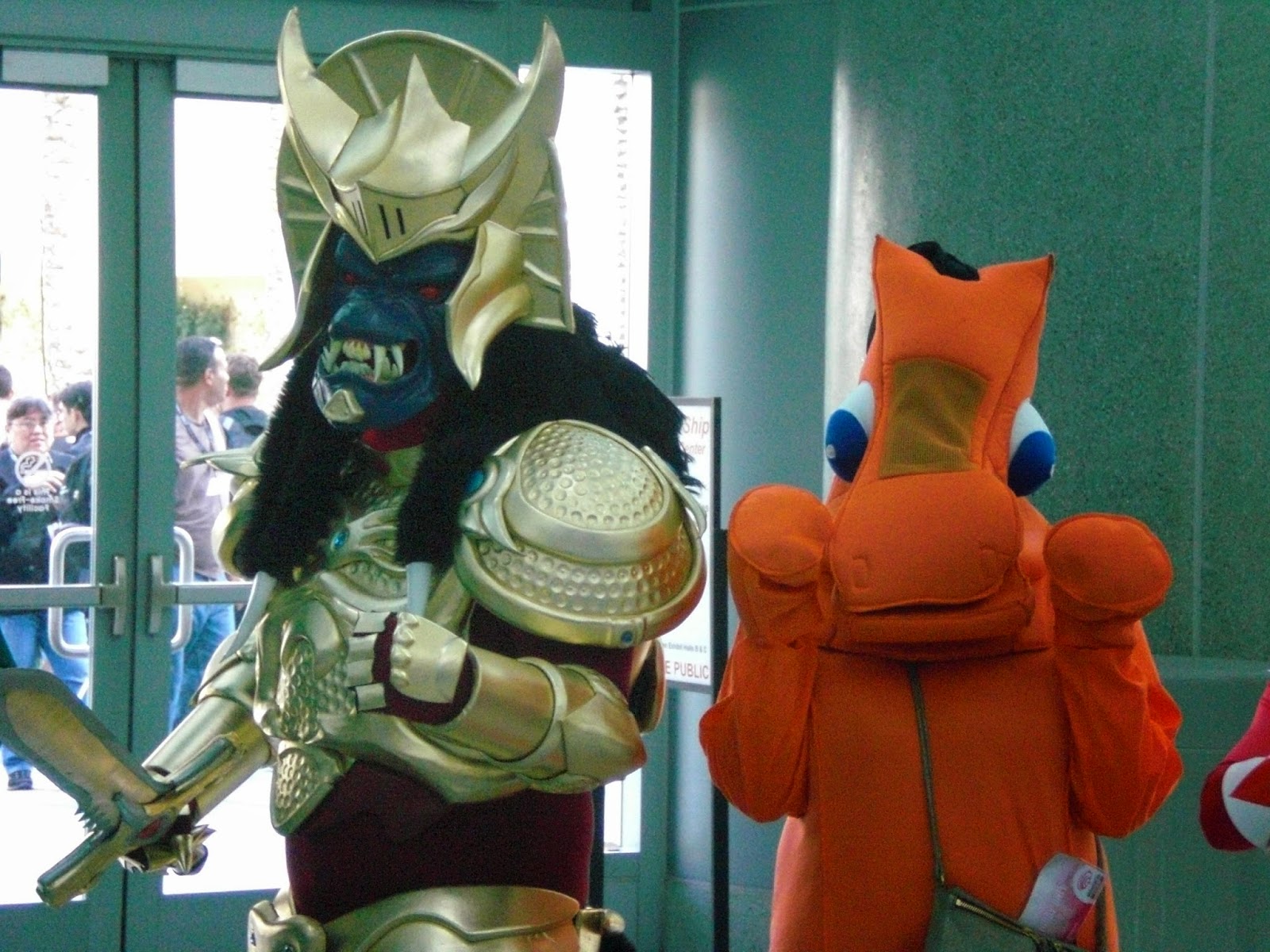 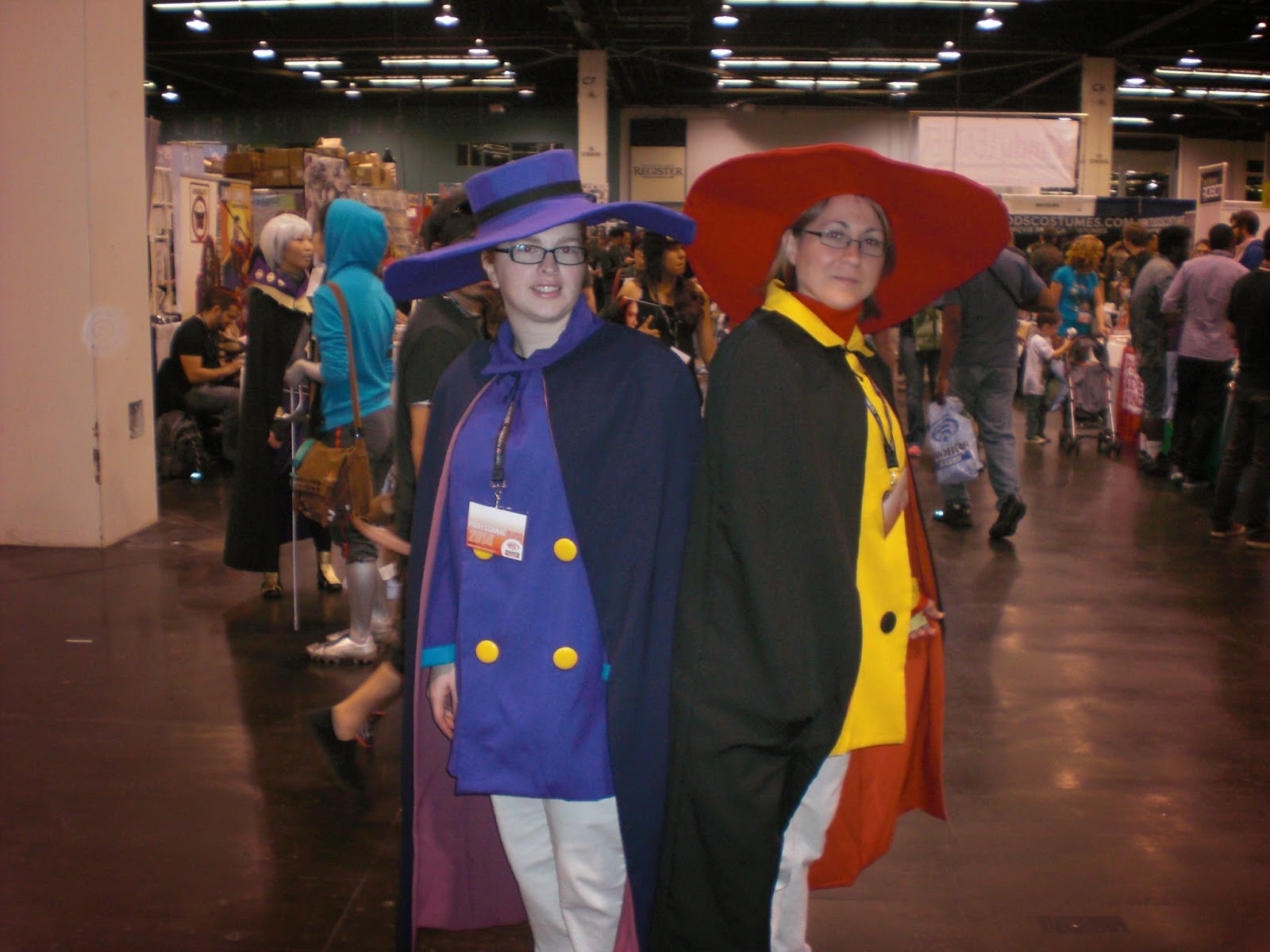 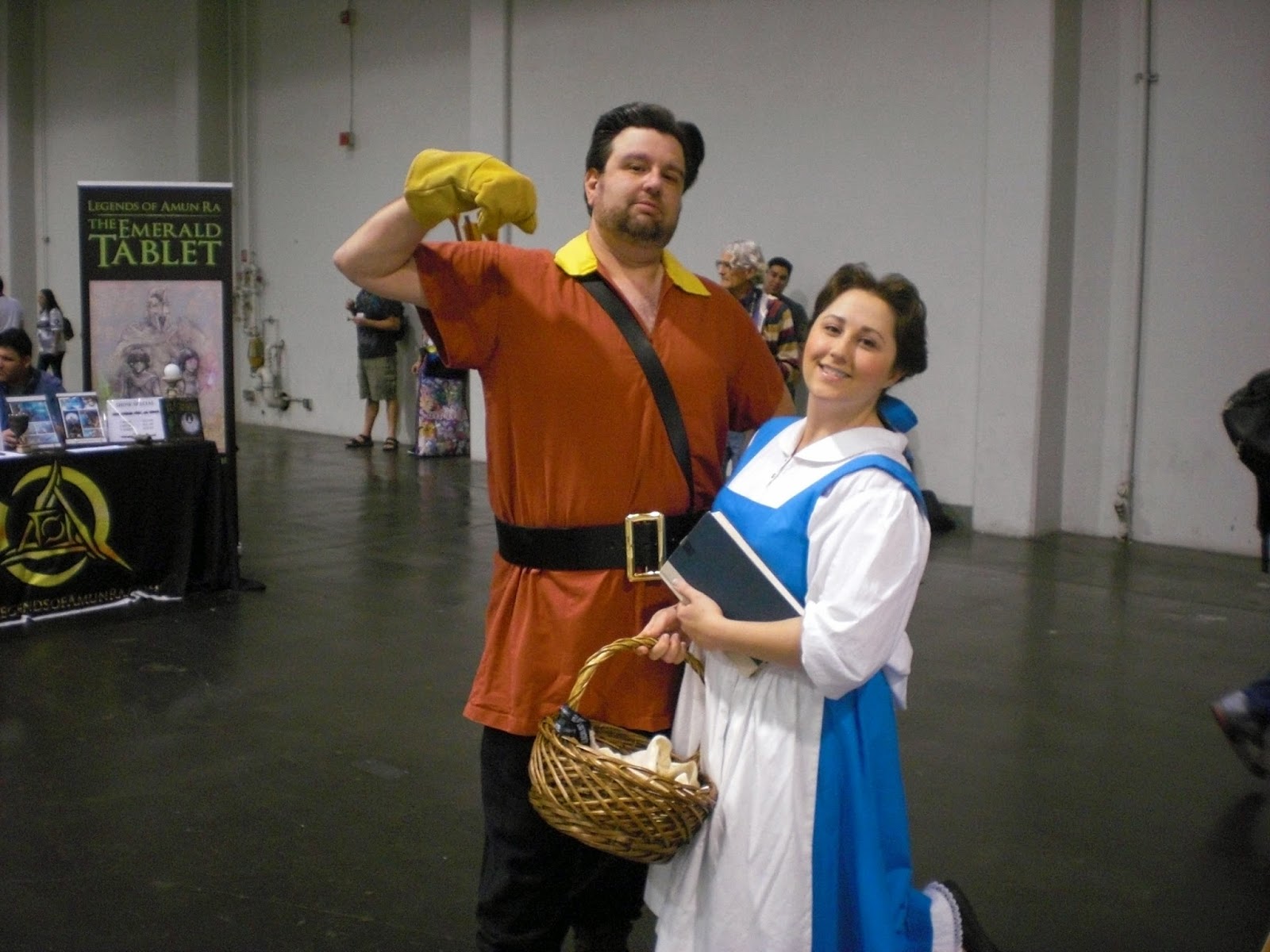 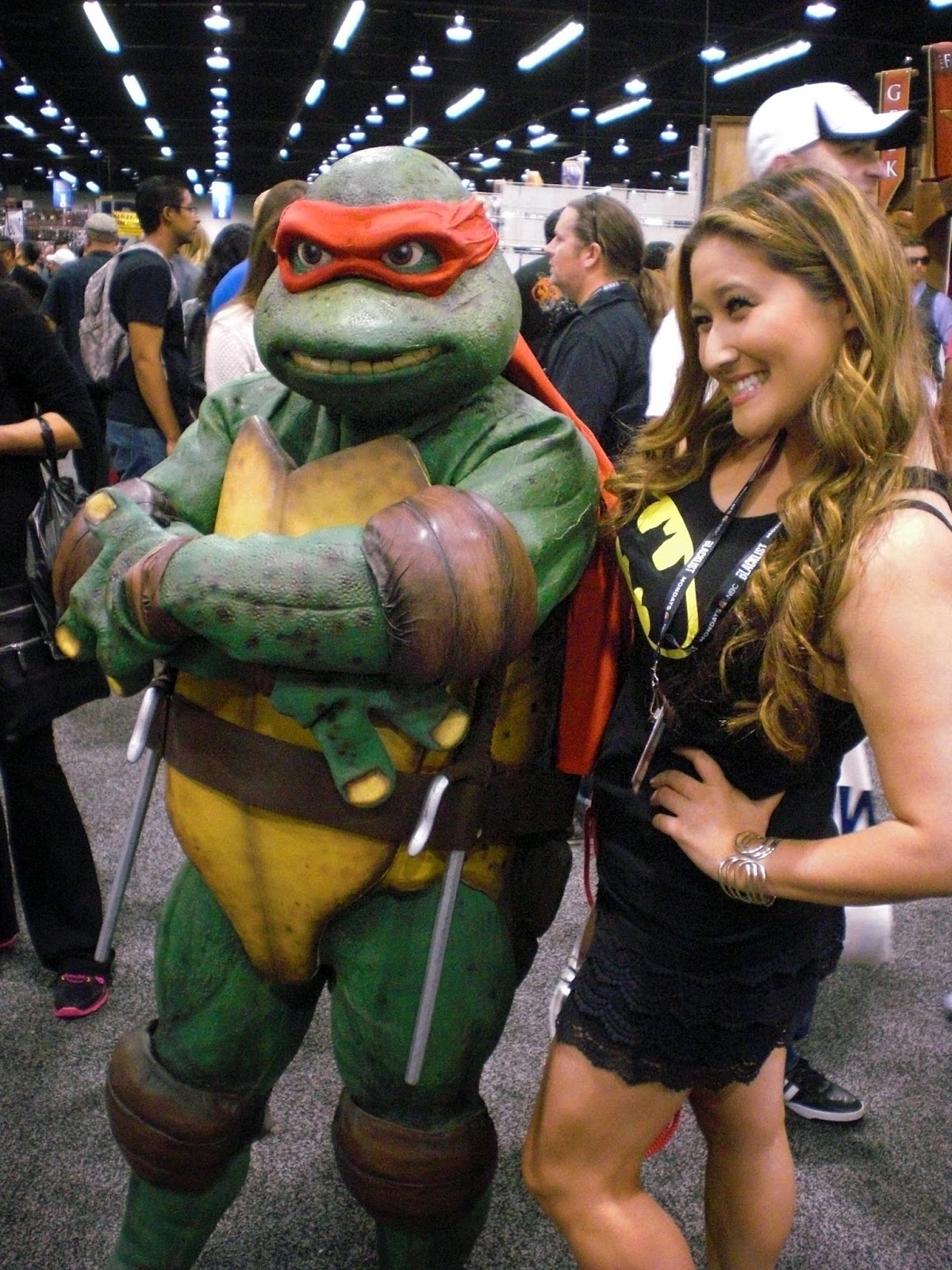 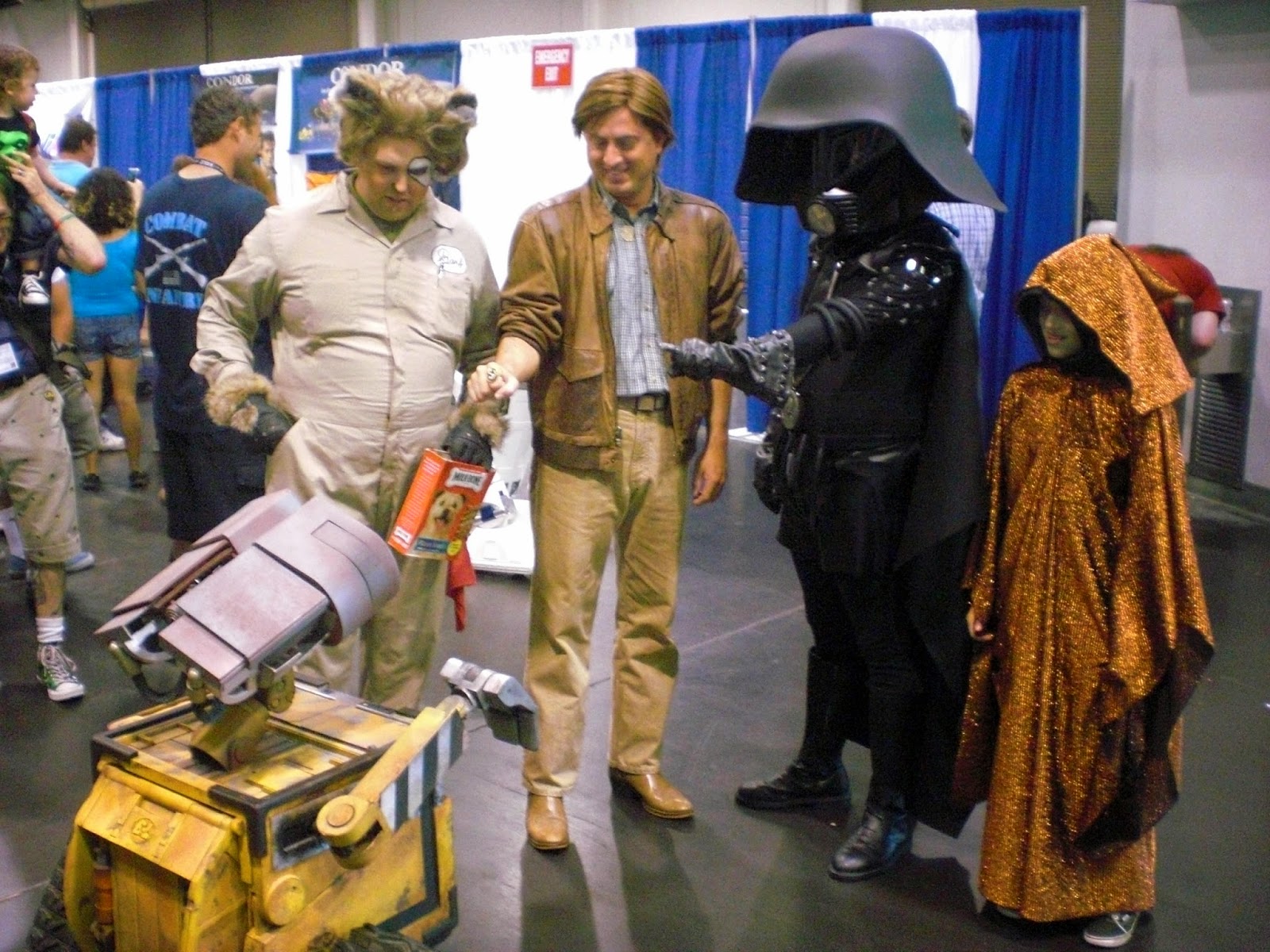 The Schwartz isn't with Wall-E.  He went above Dark Helmet's helmet! 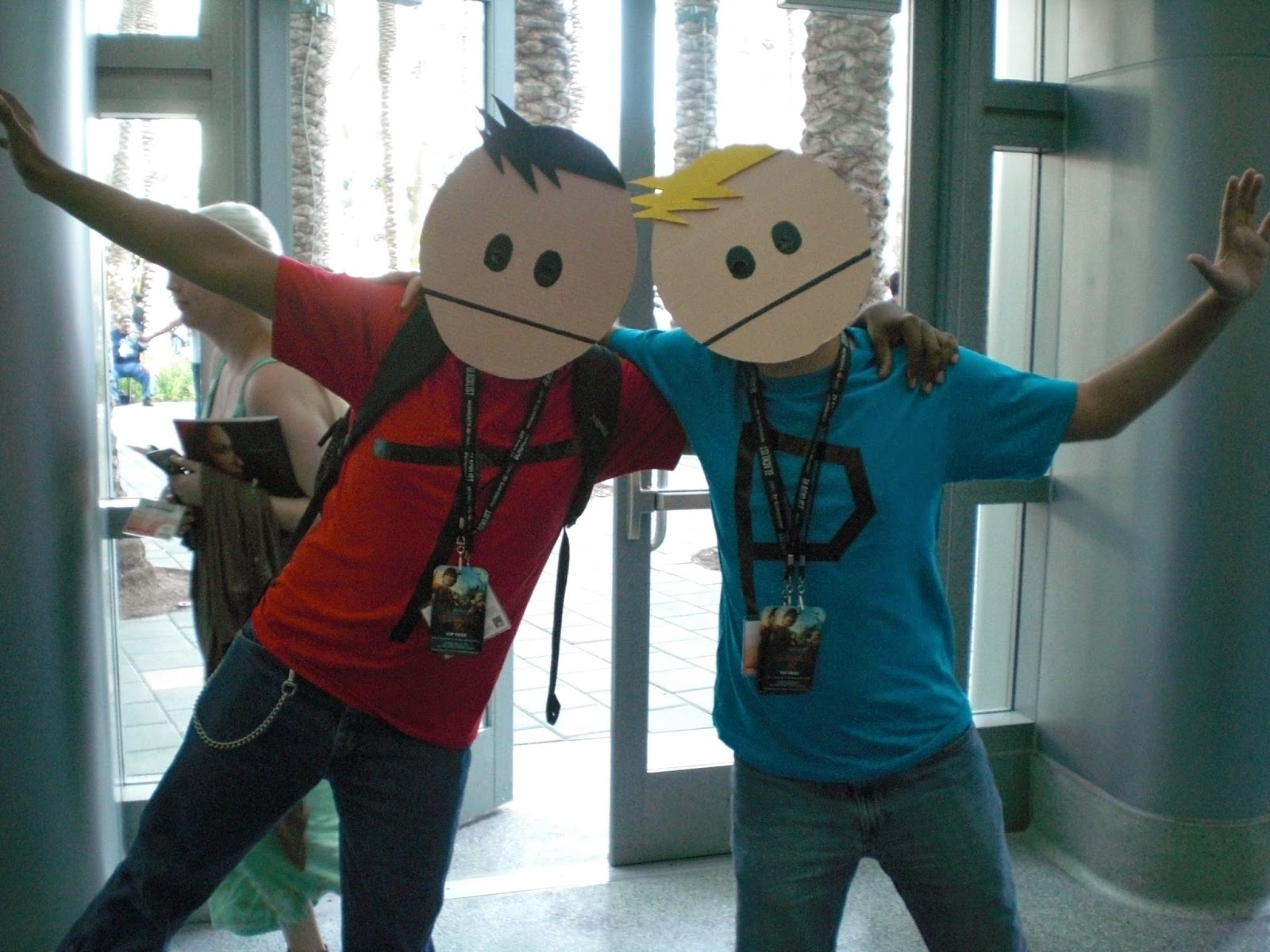 Can't Blame Canada for these two! 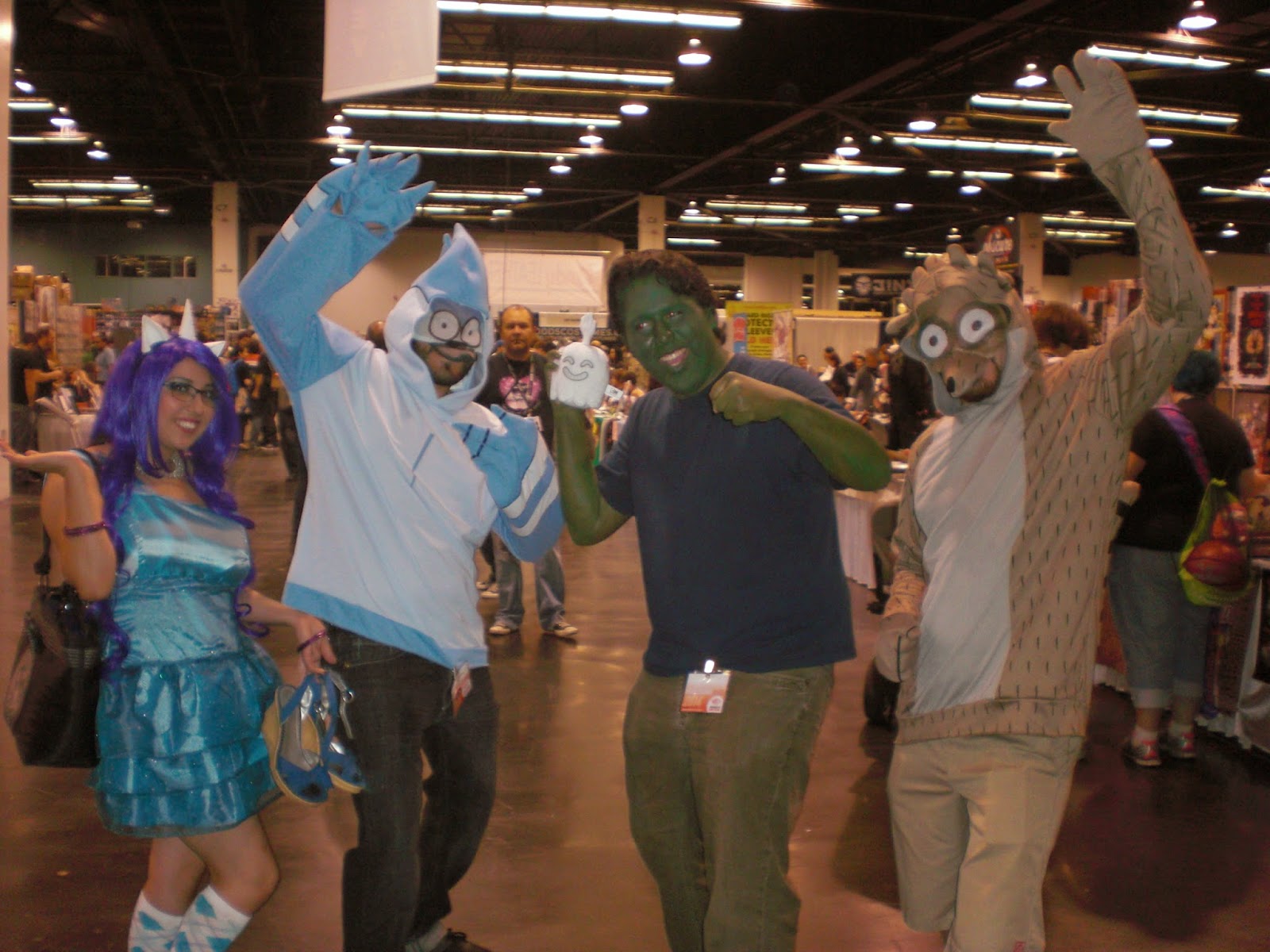 Rarity meets Regular Show!  We all yelled "WOOOOOOOOOOOAH" after the pic was taken! 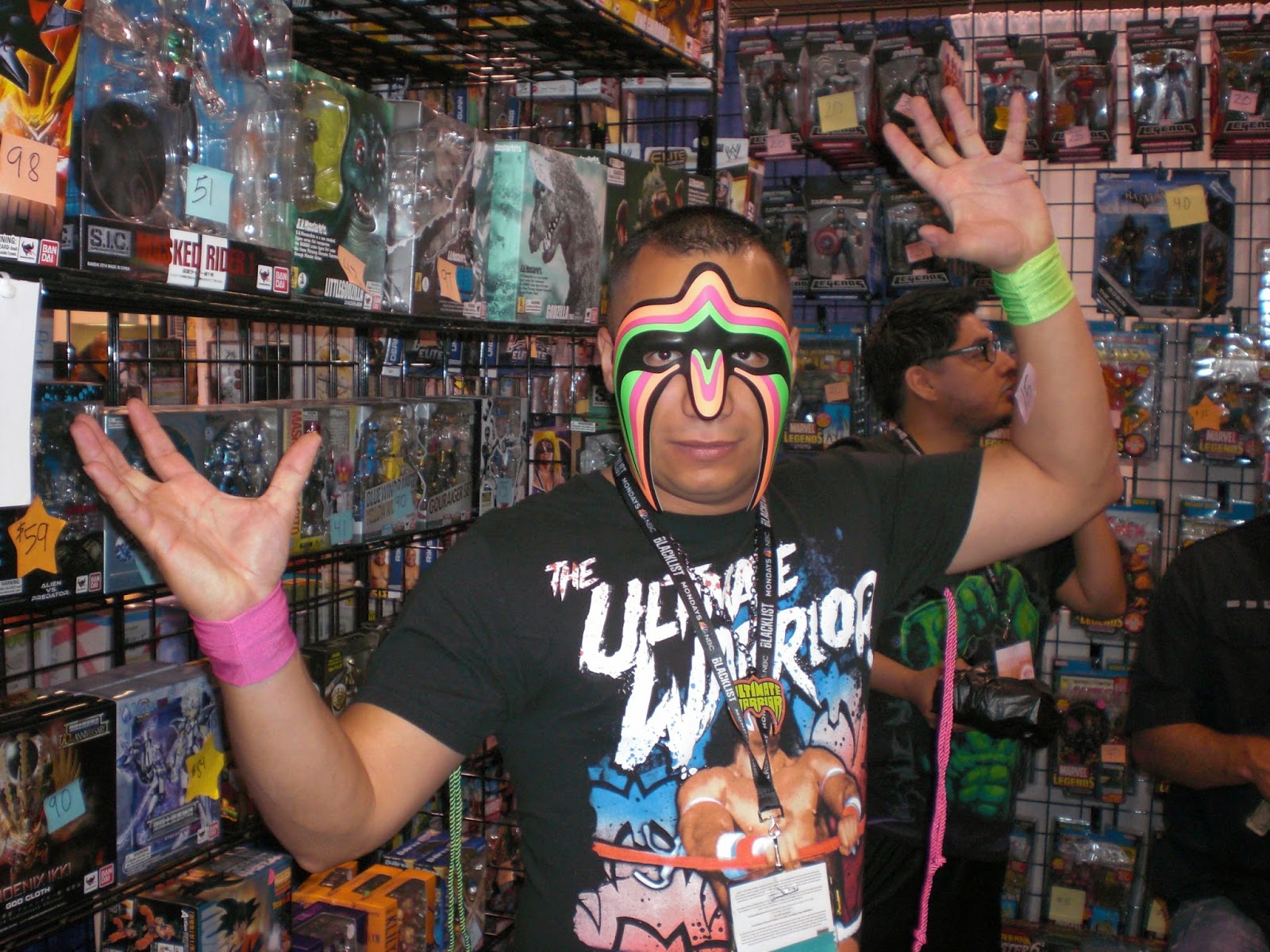 Paying tribute to the Ultimate one.  Many sad fans that week, including me, as many of you on Twitter saw the Ultimate Warrior figure that decorated my table.  I poked fun at the Warrior many times on this site, but it was always in good fun.  He always entertained and will always be remembered. 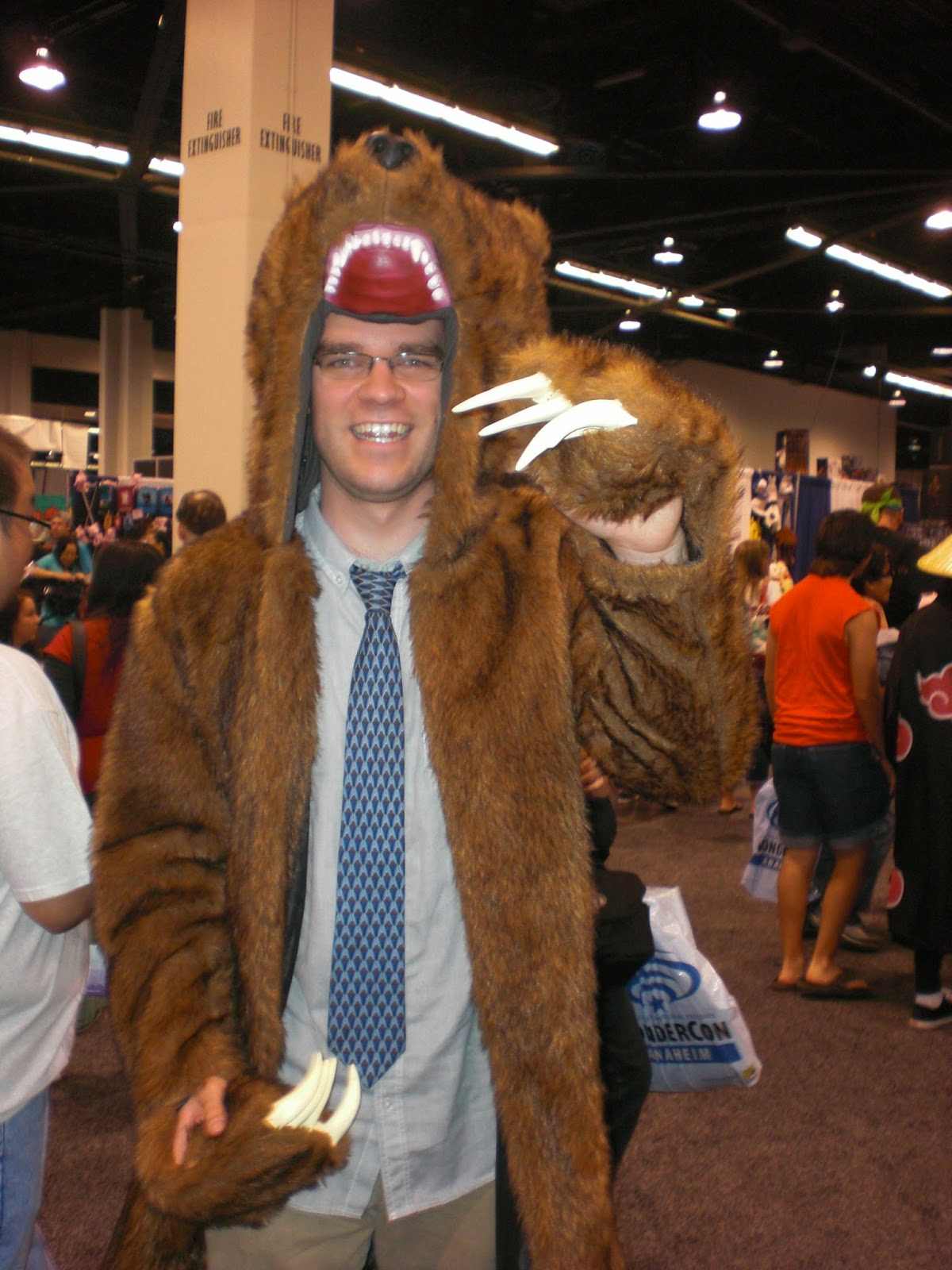 It's Blake and the bear coat!  This has gotta be the first ever Workaholics cosplay! 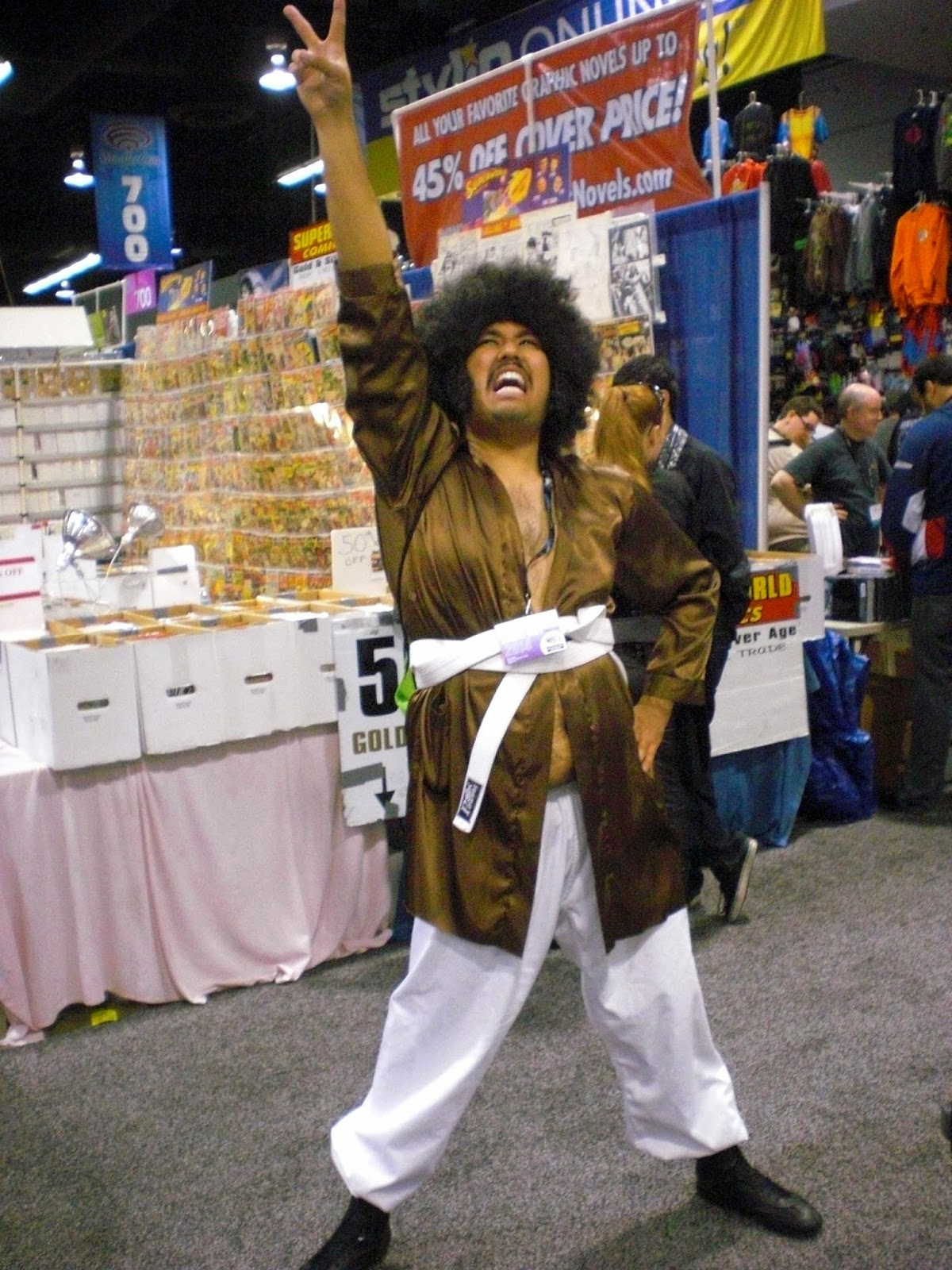 It's the Savior of Earth, HERCULE!!!  The TRUE Champion of the Cell Games! 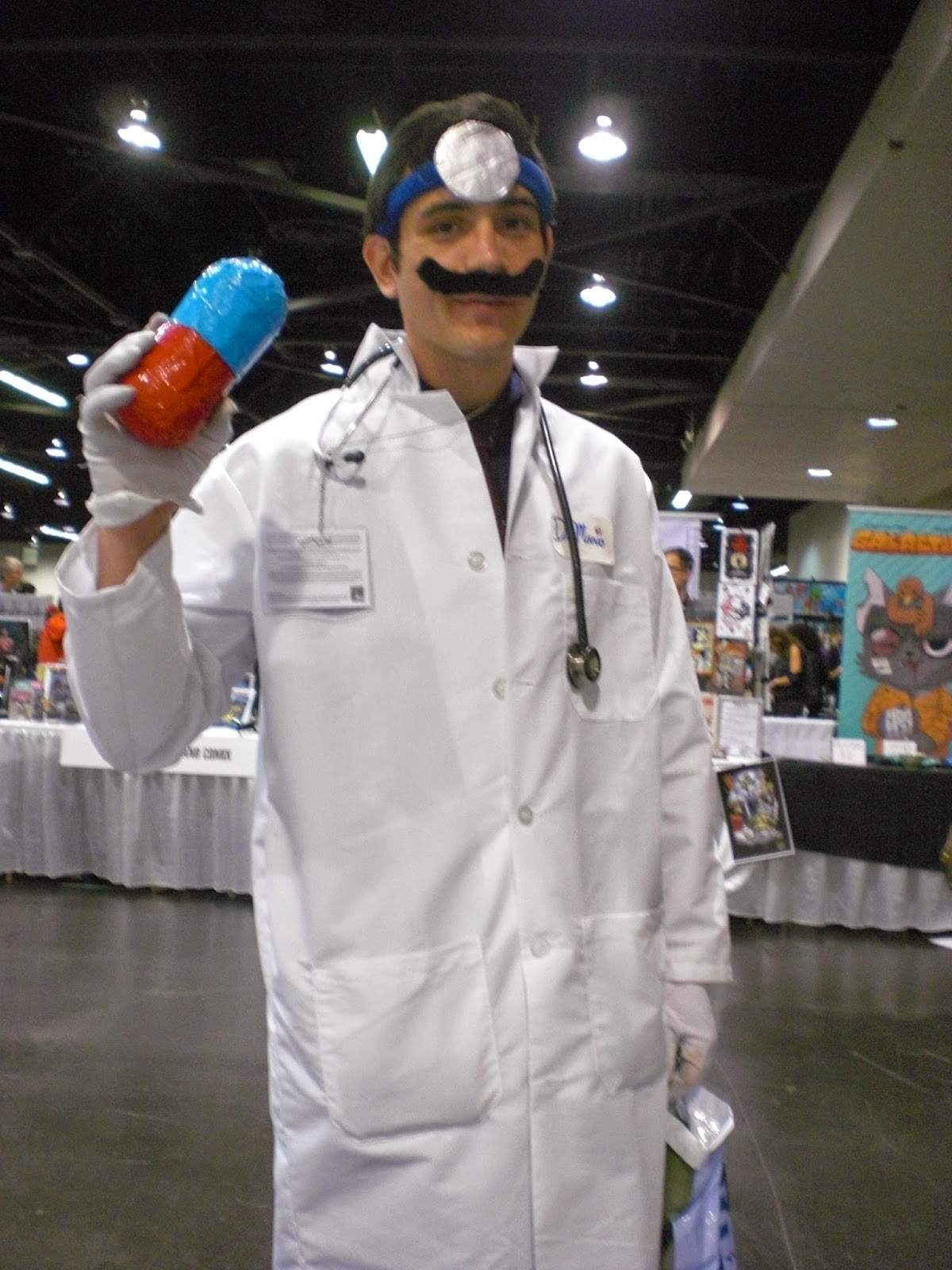 And to close things out, the most obscure Mario cosplay ever, DR. MARIO!  With a prescription for Tetris knockoffs!

And so ends another post.  I'll be back next time with a New Mushrooms that'll get everybody "Rocking."  Until then, take care and I'll catch y'all later!
Posted by jonsstuff at 12:00 AM 3 comments: