Welcome back y'all!  February is just about done!  Hopefully things are looking brighter all around.  You know what brightens up one's day?  Laughter!  You know what makes people laugh?  Fart jokes!  You know what's a REALLY good fart joke?  A little girl holding in a sneeze that shoots out her butt and causes her bloomers to explode!  And hey, wouldn't you know it?  I just happen to have that for you today!  We're continuing on from last week's wackiness, so strap in and hold on to your butts, but NOT your sneezes, because all systems are go!  Enjoy... 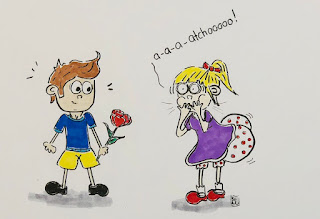 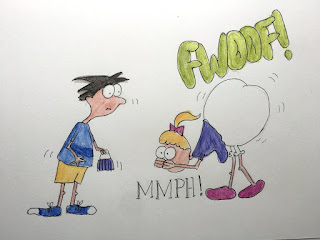 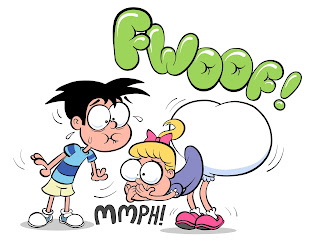 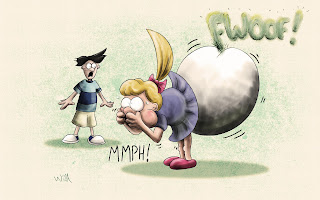 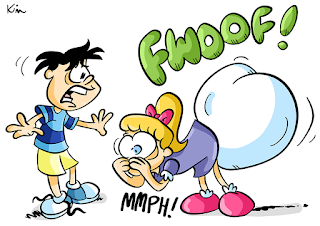 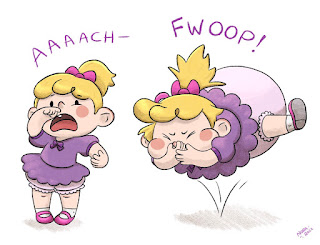 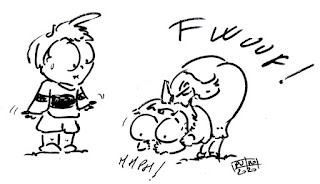 Monica Rondino
And that was second part of the Boomin' Bloomers Saga!  More great artists came in again, including yet another fan piece by Kim Belding (That guy is everywhere)!  I'm particularly happy at how many illustrators got in on this.  You see, as cartoonists, scenarios like these aren't really all that strange.  We live for wild, surreal, cartoony gags and are constantly pushing the limits.  Illustrators are often creating wonderful scenes of depth and emotion and vast environments.  To see a few take part in something so inherently zany was just a pure joy!  Thanks again to my awesome pals for taking part!  Hope y'all had a blast working on it!

And that's a wrap on February 2021!  Hope y'all enjoyed hanging with Mike and Mindy again for a bit.  I'd like to say that next week would kick off our WonderCon coverage, but I sadly doubt it's going to happen this year.  Its postponement hasn't been formally announced yet as of this writing, but barring some kind of miraculous turnaround, I just can't see it happening.  Stranger things have happened though, so fingers crossed!  Come what may, stay safe, take care and I'll catch y'all later!

Welcome back my CRAZIES!!!  Halfway through February already and hopefully the world is on the rebound.  Time marches on here at the CRAZYVERSE with more Mike & Mindy fun from some pals over on Twitter!  In recent years, one of the more popular trends among artists on social media is the "Draw This In Your Style" Challenge.  The premise is pretty simple: An artist posts something they drew and challenge others to draw it in their own styles.  I'd taken part in a few of these challenges myself and decided as it was M&M's anniversary last year, why not see if anyone would be interested in drawing one of their wildest moments in their own styles?  Well, amazingly enough, I got some entries, of which I will now share them with you fine folks!  Enjoy... 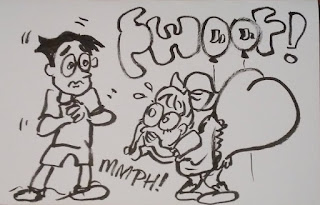 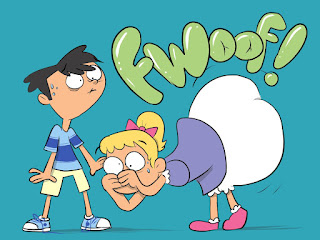 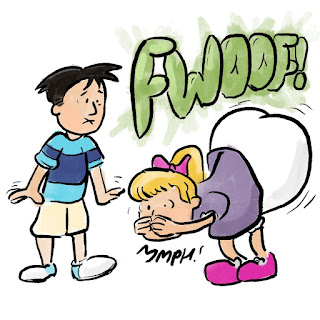 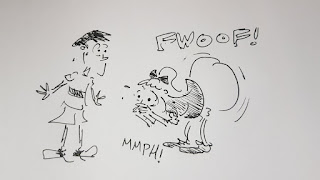 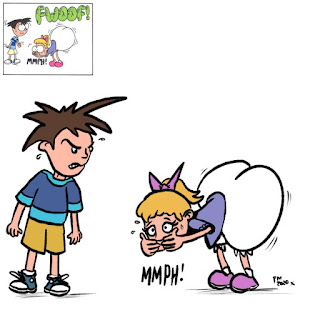 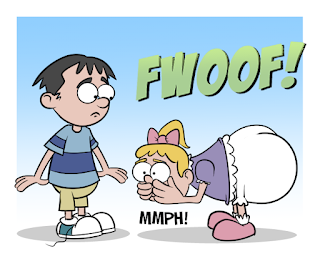 Ray Betancourt
For those who don't remember, this came from a panel from the August 2012 Mike & Mindy comic where Mindy attempts to hold in a sneeze only for the sneeze to shoot out on the other end, causing her bloomers to blow up and explode, much to Mike's amusement.  Mindy's bloomers were often a source of cheap laughs over the years, and probably no more so than in this legendary strip!  Thanks again to my wonderful pals who took time out of their own drawing schedules to give Mindy an explosive tribute!

Well, that's all for now.  One post just wasn't enough to capture all this madness, so next week, we'll finish off February on a high note with even MORE puffy bloomer madness! So be sure to come back and check it out!  Until then, stay safe, take care and I'll catch y'all later!

MIKE AND MINDY HAVE SOME PALS!!!

We are back!  February is a short month, but it sure does pack a punch weather-wise!  But that's not the reason we are all here today.  We are here because it's Mike and Mindy's Anniversary and some pals wanted to show there appreciation for the Toony Tykes!  Which pals you're wondering?  Scroll down and you'll see!  Enjoy... 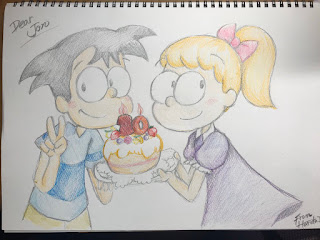 First up is this sweet little piece from Twitter pal Haruka!  I was stunned by the amount of fan art that came in for M&M's 10th Anniversary before and even after it happened.  Some of the fan art came from countries that I didn't even know followed the comic.  Most of it came from Europe while some, like in Haruka's case, came from as far away as Japan!  It really is a joy and quite humbling to know that people outside of North America not only read my comics but enjoy them too.  I never know how well these comics translate outside of the Americas as humor is different everywhere.  M&M was a silent, gag-based comic, so there was no language barrier to overcome.  Even though they ended so long ago now, I still get new fans every year because of these wacky kids! 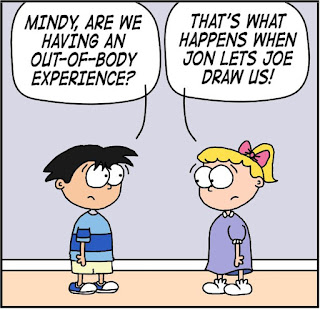 Next up is a funny piece from The Muse Stand creator Joe Michael K!  Joe's another Twitter pal who felt inspired to give these two tykes a shot in his own style!  I always get laugh at how no matter who's drawing them, nearly everybody always includes the giant, rounded eyes in their M&M fan art.  It's certainly among their trademarks.  Along with helium of course! 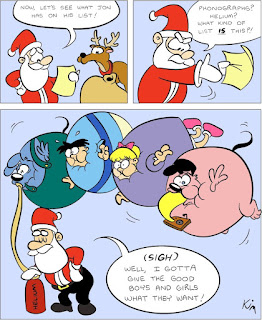 Speaking of helium, it's just not a fan art post without the tiny, the toony and more than a little loony Kim Belding!  Kim always draws my characters with such wacky glee!  And when it comes to balloon gags, he always rises to the top!  Gotta say though, Santa's white gloves and black pants are really weirding me out here.  Kim assured me that's just how Canadian Santa dresses, but I have my suspicions!

Well, that's all for now.  Next week, we'll be back with some more fan art that's explosively fun, so be sure to come back and check it all out!  Until then, stay safe, take care and I'll catch y'all later!

Welcome to February CRAZIES!!!  It's a new month and with it, a little renewed hope.  Valentines Day isn't too far off, Spring is around the corner and vaccines are beginning to roll out.  It's a very slow process but hey, it's a start.  February also marks another special occasion: The CRAZYVERSARY!!!  That's right!  This month marks 11 years since since I launched this blog with the help of a couple a rascally kids whose only mission in life it seemed was to wreak as much cartoony mayhem upon each other as possible!  I'm talking about Mike & Mindy of course, and today they come out of cartoon retirement again, albeit not in as grand of fashion as last year's bash.  But they are still here none the less and have brought another longtime pal of all things CRAZY with them!  Who you ask?  Scroll down and see!  Enjoy... 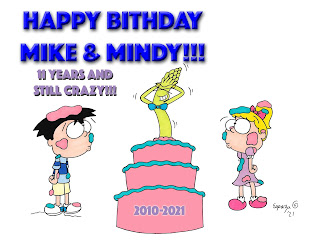 It ain't a party without cake, and it just ain't a CRAZY party without the legendary Dancing Asparagus coming OUT of the cake!  His origins are more simple than people realize, but the Cliff Notes version of it is he initially appeared as a mere mention in a jam comic that I ran with once it was my turn to draw a panel.  He appeared in my comics and art a lot during the run of M&M and Mushrooms and sort of became the unofficial Ambassador of the CRAZYVERSE.  He hasn't appeared much in recent years, but folks still remember him and it seemed only appropriate that he'd appear again as Mike and Mindy make their own return during their special month.  They may all be retired now, but these characters all still mean a lot to me.  They were my first stars and they will always be a very important part of the CRAZY legacy.
Well, that's all for this first week of February, but we'll be back next time with some fun guest art all paying tribute to the madness that is Mike & Mindy!  In fact, we'll be treated to this guest madness all month long, so stay "Tooned!"  Until next time, stay safe, take care and I'll catch y'all later!
Posted by jonsstuff at 12:00 AM No comments: