Wow!  Final week of January already!  One month down, 11 more to go!  Hopefully this year is off to a far better start than last January was!  I wrote this weeks ago, so I have no real way of knowing at the moment!  Anyway, may as well end the month in a gassy, er, classy manner, so let's get to it!  Enjoy... 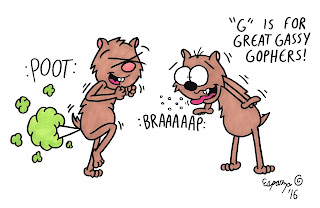 These gophers are killing the ozone!  Another one from the Daily Doodle, this theme asked to have fun with the letter G, and since there aren't enough farting gophers in the funny pages these days, I decided it was time to remedy that!  I'm sure a little pal of mine who lives across the pond will get a big kick out of this one!  As will any frat boy waking up from a massive hangover!

And that's all she wrote for January!  Hope y'all enjoyed the art.  We'll be back next time with some new art to start February off on the right track!  Until then, take care and I'll catch y'all later!
Posted by jonsstuff at 12:00 AM No comments:

Welcome back CRAZIES!  Are we really past the midway point in January already?  My how time flies!  Anyway, it's a new week which means some new art is here!  So let's dive in, or jump in this case, and take a look!  Enjoy... 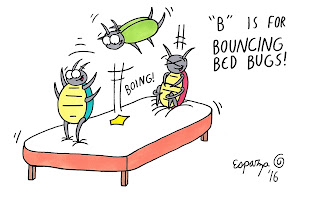 Hey!  You bugs stop that!  One of you are bound to get hurt!  This fun theme was another one from the Daily Doodle that simply said to have some fun with the letter B.  I love drawing bugs so decided to toss a few on a bed!  'Course, real bed bugs are much smaller and would actually be a really BAD thing to have roaming around in your sheets!  For the sake of the art, I turned them into beetles.  Very colorful ones!

And that does it for another week.  We'll be back next time to close out January with some very gassy, er, classy art!  Until then, take care and I'll catch yall later!
Posted by jonsstuff at 12:00 AM No comments:

And we're back!  Hope y'all are having a wonderful 2017 so far.  We're only a few days in here, but it never hurts to ask!  Anyway, the Labyrinth love continues this week with a character who's only in one scene and yet for many, steals the whole movie!  So let's jump right in, shall we?  Enjoy... 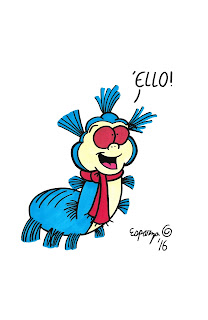 "No, I said 'ELLO, but 'at's close enough!"  One of the best lines in the movie!  The Worm was such a funny character despite such a brief appearance.  Monty Python star Terry Jones wrote the film, and the older I got, the more I really picked up on just how many Python tropes made the cut!  The Worm is a good example of this but probably the most blatant examples of Python humor in Labyrinth are the Shaft of Hands, the Lying Door Guards and the Warning Statues.  Frankly, I wouldn't be surprised if Terry Gilliam had a small hand in this film too, although it's never been confirmed.  I really loved coloring this one.  The Goblin City itself is so dark and grungy and yet filled with so many brightly colored creatures!  It's a contrast that worked really well on screen.  Henson and artist Brian Froud had some great color schemes picked for the characters of Labyrinth and The Dark Crystal.  I can't stress enough how important colors can be to a film.  I'd go into more detail, but it's a lecture's-length topic for me!  Sadly, I can't recall doing any more Labyrinth art.  Either the themes were few or I was busy at work.  Perhaps down the road, I'll draw some other characters.

And that's all for now.  I'll be back next time with some bugs that really know how to get moving!  Until then, take care and I'll catch y'all later!
Posted by jonsstuff at 12:00 AM No comments:

What's up CRAZIES!  We're back with a new post on a new day in a new week in a new month in a brand spanking new year!  That's a whole lotta new we're talking about here!  We all know by now what a difficult year 2016 was.  But this is a new slate.  Will there be bumps in the road?  Most certainly.  There always is.  But hey, it's nothing we can't handle, right?  We'll get through it all and together, make 2017 the best ever!  So let's put aside the past and start fresh!  After all, we're only a few weeks away from the start of the con season!

Anyhoo, that's enough banter.  It's time for some art! Enjoy... 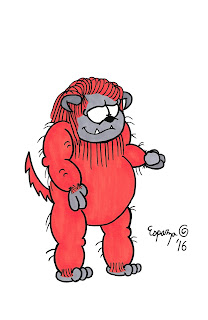 Labyrinth is one of my all time favorite films and one of Jim Henson's greatest masterpieces for sure.  When the Daily Doodle did a few themes devoted to the movie a while back, I knew I had to join in!  The first theme was Ludo, the gentle giant who controls rocks.  Ludo was a character I could really relate to as a kid because, like me, he was big, slow and just wanted peace.  Years later, I would have a giant boxer dog named Buddy who exhibited many of these same traits.  Most giants are gentle souls.

Well, that's all for today.  We'll be back next time with another character from Labyrinth to hopefully help make the transition to 2017 a little smoother.  Until then, take care and I'll catch y'all later!
Posted by jonsstuff at 12:00 AM 1 comment: