HELLOOOOOOOOOOO!!!  Imagine a shrill, Mrs. Doubtfire-like voice while reading that first word.  Makes it funnier!  Another month is up and it's leading into Spring!  Warmer weather, WonderCon, Boysenberry Fest...  Good God I cant wait for things to get started!  Anyway, we gotta close out February in a fun way, and since Spring's coming, why not go "Green" with it?  Enjoy... 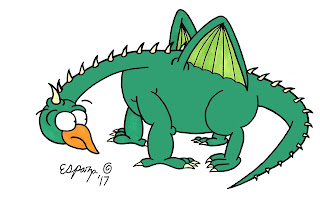 A green Dragon for the Green Season!  I honestly can't remember whether this was for the Daily Doodle or Sketch Dailies, but I had fun creating him!  Dragons have become a bigger part of my art lately, as anyone who reads Bubble Fox can tell you.  I get asked often if "Dragon Mountain" will ever get revealed in the comics.  The short answer is yes, the long answer is yes, eventually.  I do plan on exploring it someday in the comics.  Kinda gotta build up to it though.  Just showing up there wouldn't make much sense.  Even in a comic where a fox farted bubbles, a possum inflates himself as a defense mechanism and a toad keeps operatic snails, logic must play some kind of role in storytelling!

And that's all she wrote for February 2017!  We'll be back next week to kick off March with a twisted trip down the yellow brick road!  Until then, take care and I'll catch y'all later!
Posted by jonsstuff at 12:00 AM 1 comment:

Midway through February already?  Man does time fly! Between work and art and life, I almost forgot I'll be at a con this weekend!  But more on that later.  Right now, it's art time, and this one will give you belly laughs... BIG belly laughs!  Enjoy... 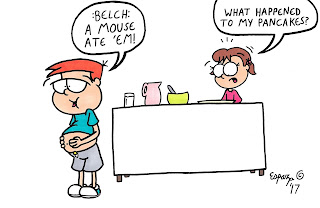 Those mice are always such a nuisance!  Although I think a rat may be the culprit here!  His button's about to burst on his shorts even!  This wasn't for neither Daily Doodle or Sketch Dailies.  Someone had noted on Twitter that it was National Pancake Day, so many artists jumped on board with some pancake art.  I've always been one to give into peer pressure, so I quickly whipped up a rough sketch that two years later finally got inked!  I know how that kid feels.  I usually gotta be rolled out of IHOP twice a year during their All-You-Can-Eat-Pancakes month... Which is right now!  CRAP!!!  I gotta get to IHOP, stat!

Before I go, just wanted to give y'all the heads up!  I'll be at San Diego Comic Fest starting Friday, Feb 17 through Monday, Feb 20 in Artists' Alley!  Come on by and chill out with me at San Diego's OTHER, more agreeable comic convention!  I'll be their with my books and sketch cards (Prices posted at the booth) and any CRAZY wisdom I can pass on!  So come on down and join the CRAZY Crew!  Hope to see y'all there!  For more info on tickets and location, check out the SDCF site here!

Another week down as we march towards March.  I'll be back next time to close out February with a "Beastly" post!  Until then, take care and I'll catch y'all later!
Posted by jonsstuff at 12:00 AM No comments:

Welcome back CRAZIES!!!  We are approaching Valentine's Day, or as I call it, Tuesday.  It's a pretty pointless holiday when you're single and nine times out of ten, I'm working anyway.  But for those of you in a relationship, it's a day to score major points with your significant other!  Either way, I have some Cupid art that needs a reason to be posted, and this seems like the perfect excuse!  Enjoy... 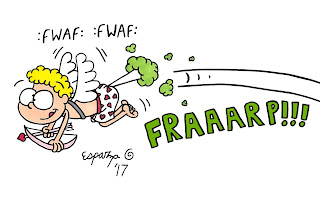 If love is blind, I'd imagine its scent is very heightened!  This theme came from Sketch Dailies a couple of years ago.  They simply wanted us to draw Cupid on Valentine's Day, so I did!  The wings carry him, but the farts propel!  And I wouldn't say love is totally blind.  Just a little nearsighted!

And that's all for today.  We'll be back next time with the very "Fulfilling" art for those that are hungry!  Until then, take care and I'll catch y'all later!
Posted by jonsstuff at 12:00 AM No comments:

Welcome to February my CRAZIES!!!  One month down and so far, so good!  Well, except for the global turmoil.  And the one NFL owner making a horrible mistake.  And me being sick for most of January.  But hey!  It's a new month, so it's time to make a fresh start!

This month marks my 7th Anniversary here on Blogger, or as I've been calling, the CRAZYVERSARY!!!  In the past, it usually meant a whole month of Mike & Mindy guest comics, but they're long gone now and I usually try to move forward with things (Although I'm always happy to receive M&M fan art and guest comics, HINT HINT!).  But then I remembered something.  A comic starring the terror tykes that no one has ever seen before, save for my good pal Harry over in England.  I present to you all...  THE LOST MIKE & MINDY COMIC!!!  Enjoy... 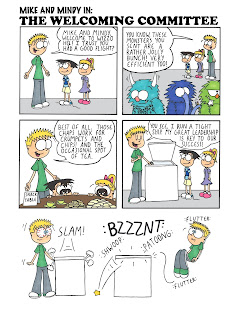 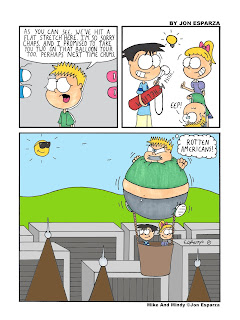 A few years back, my pal Harry Rickard over in England attempted to launch his own humor magazine called The Wizzo.  Harry loved British humor mags like The Beano and The Dandy, which also happened to be among the oldest publications in the world at the time.  The Dandy had sadly just gone under, ending a true era of humor comics.  Where one door closed, another opened as Harry quickly realized that any humor magazine that started up at that point would instantly be the Number 2 title in the UK, certainly not a bad spot to have in the market.  Harry had asked me if I'd be interested in sending old M&M and certain Mushrooms strips for publishing which I happily agreed.  Sadly, Harry was a high school student at the time dealing with all the pressures that come with that.  As time went on, he and his partners moved on to college and other interests while I moved on to Bubble Fox, Peppertown and focusing more on film projects and more physical art like masks and armor.

So The Wizzo never happened, but I was still happy to be associated with it, brief as it was.  When the ball started rolling, Harry had asked if I could do a special two-page M&M comic to commemorate their debut.  His only other request with the comic was for Mike and Mindy to, as he put it, "Blow (him) up like a giant balloon!"  It's the request I always get when doing guest comics and fan art, and Mike and Mindy are always happy to oblige!  This was a fun comic to do and Harry loved it!  When he alerted me a few weeks back that he was pulling the plug on The Wizzo, he asked if I'd post this comic on the blog, so that everyone could have one last run with M&M.  I can't let my English little brother down, so here they are, one last time, in all of their full-color inflated glory!  I give you Mike and Mindy and their Harry Balloon!  Thanks Harry for giving me a reason to share my kids again.  They were really getting restless at the Retired Cartoon Characters Home!

And that's all for this week!  We'll back next time with some new art that's sure to make you lovesick... Or sick of love!  Until then, take care and I'll catch y'all later!
Posted by jonsstuff at 12:00 AM No comments: