IT'S TIME FOR WRESTLEMANIA!!!

That's right folks, Wrestlemania 26 is just three days away and what better way to celebrate than with a journey back to 2001 with the "Gimmick" Battle Royal from Wrestlmania 17!


(NOTE: I only posted the intros for the match. Why? Because that match itself only lasted a few minutes and really, if you've seen one battle royal, you've seen them all. And in case you were curious, the match was won by the Iron Sheik. Why did he win? Simple, because he was so old, he could no longer safely be thrown over the top rope in order to be eliminated!)

Many great wrestlers in this match. Some were wrestlecrap, like the Gobbledy Gooker and the Goon. Others were legitimate legends, like Michael "P.S." Hayes, Sgt. Slaughter and the late John "Earthquake" Tenta. Then you had guys like Hillbilly Jim and Doink the Clown who weren't necessarily legends, but weren't exactly wrestlecrap either. Doink the Clown is one of the most unique gimmicks ever. On paper, a wrestling circus clown should have had failure written all over it. But for one reason or another, Doink just really got over with the crowd. Part of it probably owes to the fact that guys who played Doink (there were at least four that I know of) really played the part over the top. Doink would come to ring popping kids' balloons with his cigar, throwing pies at unsuspecting spectators, and even used odd foreign objects on his opponents. In one match, he hit Crush with a car battery! In short, Doink was a bad ass, and people liked that.

On an interesting note, Tugboat, who looked for all the world like a giant peppermint in this match, was also Typhoon and the aforementioned Shockmaster. I've actually gotten some feedback about that post, mostly people wanting to know "Why put him in a mask that hindered his vision so badly?". The simple answer is that WCW was run by a bunch morons who didn't know what the hell they were doing. (If there was one constant with WCW, it was inept leadership!) While that may hold true, a simpler reason was that Big Van Vader was in the match, and he too wrestled in a mask. Vader would come to the ring wearing a metallic helmet that spewed smoke, removing it before entering the ring. It was an awesome sight that scared the crap out of many a child sitting in the front row (judging by Vader's reputation for being stiff in the ring, it probably scared his opponents as well). WCW's logic here was probably that the best way to combat one scary fat guy in a mask was with another scary fat guy in a mask. Needless to say, they should have put more thought into it.

This is a pretty long post, and I apologize for that, but I promised the story of the first time I worked RAW, so here goes. I was just starting out as a stagehand, and my brother, Dante, managed to get me on the load out for Monday Night RAW. It was May 2004, and I had just turned 20. So we get to the arena, waiting for our call to start, and who should come out but The ROCK! I was stunned. He came up and shook my hand and thanked all of us, even talking with my brother for a bit about offroading. The next surprise came when I was put on the ring crew. So I got to walk out of the entrance and down that legendary ramp. I had dreamed of this so many times as a teenager and now I was getting to do it for real. With the ring a mere 20ft. away, I stood up and said "To hell with it, when am I ever going to get this chance again?". In that instant, I bolted down the ramp and slid through the ropes and onto the mat, jumping up, pumping my fist. It was an awesome night, seeing all the wrestlers, walking around the set. It's something I'll remember for the rest of my life.

Well, that's all for this week. Time permitting, I'll be back next week with an Easter Greating and a new adventure staring Mike and Mindy. LATER!
Posted by jonsstuff at 12:50 PM No comments:

Wow! I guess there are people that actually read my blog.

In truth, my follower is actually my good friend, Ricardo Medina. A lot of you may recognize him as "Max Sterling" from the popular youtube shows The Flunky/Max Sterling Show and Ghetto Gamers. Anybody who went to Comic-Con last year would know him as the guy who got Kevin Smith to write some unflattering comments about Twilight on the film's poster! It's a pretty funny story, but it will have to wait until Comic-Con rolls around. It'll be much funnier that way. (Actually, I have a lot great Comic-Con stories!) Anyhoo, Ric's a good friend and a damn funny guy. Thanks for following me!

Anyway, it's video week! And here's one I came across at the suggestion of my co-worker, Matt Marty. It's pretty freakin' hilarious, and I hope y'all enjoy it.

Damn! I always knew the Count was pimp!

This past week was quite a whirlwind for me. In a span of three days, I was working the Nuclear Cowboys tour, the Moscow Symphony Orchestra and WWE Monday Night RAW. Each show was pretty cool to work on and a lot of fun. The WWE (I really miss the "F") road crew are some of the nicest dudes you will ever come across. And they got their act down to a science. That's the fastest I've ever done a TV show before. I didn't get to meet any wrestlers this time around, although I saw plenty of them (Triple H, Big Show, Christian Cage and John Cena, who I was surprisingly taller than!). Still, it was a cool experience, and one I look forward to every year.

Well, dear bloggers, I'm afraid that's all the time I got for right now. Since Wrestlemania is next week, I'll post one of my favorite 'mania matches from Wrestlemania 17. And I'll even through in the tale of my first experience working Monday Night RAW back in 2004, free of charge!

Take care, LATER!
Posted by jonsstuff at 1:06 PM No comments:

Hey Folks, sorry about not updating last week. I'm sure all three of you who actually read this blog must have been pretty bummed. It was a busy week at work for me, setting up for the Opera, a banquet and some sort of robot competition. My time isn't always sparing , and in these tough times, I can't turn down work. Needless to say, I may not always update weekly.

I do have some new comics though, and I'm working Monday Night RAW next week, so I should have lots of cool stuff to talk about next time! Anyway, enjoy the comics. 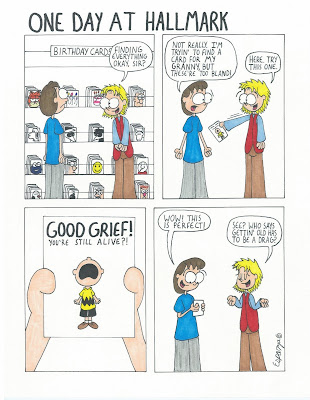 *Special Note: The above comic was one of three rejected by MAD Magazine. 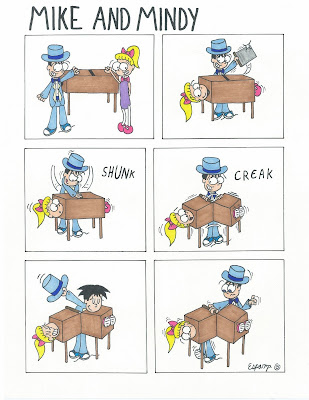 Posted by jonsstuff at 1:41 PM No comments: