BUBBLE FOX IS IN THE HOUSE!!!

Would you look at that?  We survived September!  It wasn't so bad, was it?  I mean, Fall's here, the weather's cooling down and the haunting season is finally upon us!  But not just yet.  We gotta get through this week first.  Then, and ONLY then, can we get into the Halloween Spirit.  So I guess we better get to the art so we can continue!  Enjoy... 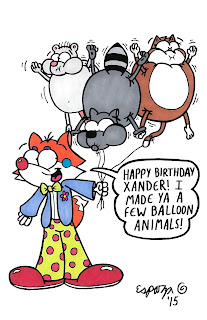 Balloons!  We started the month with some birthday balloons and we're ending the month with some birthday balloons!  Talk about literally completing the circle!  As stated several weeks ago, I've made many dear friends on Twitter, and one of my dearest is Anna Tomlinson, whose Twitter persona is "Anna the Bookworm" due to her great love of literature.  She's such a dear sweet pal in fact that she sends me a copy of the Beano Annual every year for Christmas because she heard we don't get British humor magazines out here and knew that I'd get a kick out of it!  She and her kids are all big fans of Bubble Fox, with Sap, Mooch and Clover (The Ragtags) being particular favorites of theirs.  When she mentioned it was her son Xander's birthday, I thought I'd surprise him with a birthday wish from all of his favorites!  The art got big laughs from mum and the kids and it was particularly fun to draw because I rarely get to do BF color art.  Thanks again Anna and Xander.  Hope y'all still find this funny three years later!

And that's a wrap on September 2018!  Hope y'all enjoyed the art.  We'll be kicking off October in grand fashion with a look back at Long Beach Comic Con 2018!  After all, what better way to get into the Halloween spirit than with a look at some cool costumes?  Until then, take care and I'll catch y'all in October!
Posted by jonsstuff at 12:00 AM No comments:

Welcome back CRAZIES!!!  Can you believe that September's almost over?  Seems the older I get, the quicker time passes by.  But hey, y'all didn't come here to read about the complexities of space and time.  You came for some art and dammit,  I'm here to deliver, so here it is!  Enjoy... 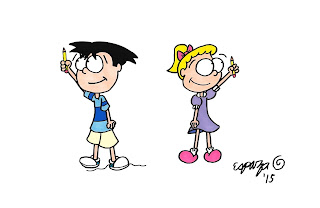 Mike and Mindy are back again, but this time, in their normal states.  I drew this not long after I ended their comic series.  Artists around the globe had been drawing their characters lifting pencils in tribute to some fallen cartoonists and I joined in on it.  Art is one of those wonderful things that has a way of uniting all of us, regardless of the boundaries put forth.  We're almost four years removed from the last time these two graced a multi-paneled page.  I hope they still bring a smile or two towards those who come across them.

And that's that.  We'll be back next week to send September off in an uplifting manner, so be sure to come back!  Until then, take care and I'll catch y'all later!
Posted by jonsstuff at 12:00 AM No comments:

We are back!  Moving right along, we got some more art to show that had once been Twitter-Exclusive, but today, is now cleaned up, polished and posted for your amusement!  So let's dive right in and see what the CRAZYVERSE has in store for us today!  Enjoy... 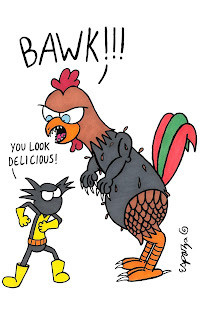 There are an insane amount of awesome web comics online, and one of my favorites has always been Black Mudpuppy by Ethan Kocak!  The tale of an Aztec God who returns to living world after possessing a salamander, it's a wild series packed with action and comedy that's well worth a read!  I honestly don't remember what inspired this piece, but I think it may have been a rather spirited discussion about the whole bird/dinosaur debate.  Science is science but movie dinosaurs just look cooler without feathers!  Anyway, in this piece, we see a CRAZY version of Black Mudpuppy taking on Chickensaurus Rex!  My money's on the deity-possessed amphibian!

And so ends another week.  Already hitting the halfway point of the month, but we'll keep things rolling along next week with another visit from some old pals.  Until then, take care and I'll catch y'all later!
Posted by jonsstuff at 12:00 AM No comments:

Welcome to September CRAZIES!!!  Yeah yeah, I know.  Summer's over, school's back in and we still have a few weeks of insanely hot weather to deal with.  Well, provided where you live at you do anyway.  But hey!  All the big holidays are right around the corner, with several big stores already urging us to start buying now, so it's not like we don't have anything to look forward to at least!  And as such, it's a new month, so that means it's time for some new art!  And I got a some special ones coming up in the next few weeks!  What's so special about them you ask?  Read on and find out!  Enjoy... 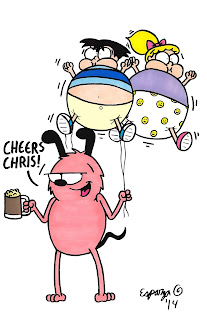 I have made many friends over the years thanks to the social media platform more commonly known as Twitter.  If you can avoid politics, sports and Internet trolls, it's actually a pretty cool place to hangout at and get your work seen.  But as stated earlier, the biggest benefit to me since joining has been all the wonderful friends I've made there!  And among the closest has been Chris Gobbett, the co-founder of the Root Beer Party!  Chris has always been a very supportive pal and a very big fan of my work, so when I heard his birthday was coming up, I decided to "Float" some art his way featuring his favorite characters: Kim Belding's Picpak Dog and a VERY buoyant Mike and Mindy!  To quote a popular TV show theme song, "Thank you for being a friend" Chris!  This originally posted in the Fall of 2014 and since then, my collection of Twitter-exclusive art has really grown!  So over the next few weeks, I'll share a few more pieces with you and will likely be including more in future months as my Daily Doodle and Sketch Dailies pencils begin to dwindle!

And that's it for this first week!  We'll be back next time with some art that is pretty "Clucking" awesome!  And if any of y'all are at the Long Beach Comic Con this weekend, be sure to stop and say hi if you see me!  It's a pretty chill show compared to San Diego and Anaheim, so everyone should have lots of fun!  Until we meet again, take care and I'll catch y'all later!
Posted by jonsstuff at 12:00 AM No comments: