Welcome back CRAZIES!!!  Informally, it's the last week of summer, though most schools would've already been back in school at this point.  Even before these current times, most schools no longer did a full summer vacation.  Of course, when you're an adult with a really relaxed work schedule, summer vacation is pretty pointless!  But, tradition is tradition, and as we head into the fall, we may as well head in with a bird often associated with the coming season.  So prep your pumpkin spice and sweaters because it's time to have a hoot!  Enjoy... 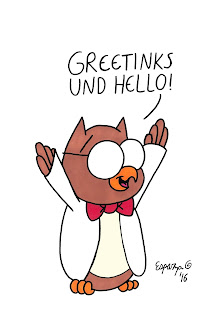 It's an owl!  And not just any owl, it's Simon Uter (Pronounced OOH-ter)!  Longtime Bubble Fox fans will recognize Simon as one of the earlier side characters of the BF universe.  He was a scientist who's experiments often led to painful consequences to its test subjects as Bubble found out while trying to learn how to fly!  He hasn't appeared in a while, but he was a fan favorite, so when PinchPunchPost put out an Owl theme, I had to use him!  Who knows? Maybe he'll pop in again in the comics someday.  One can only hope!
And that's a wrap on August 2020.  Thank you all so much for taking some time to check these posts out.  I realize these times are stressful but we gotta stay strong.  I hope in some small way my art has provided a nice escape from the harsh realities of things.  I also hope that good news is around the corner and some semblance of normalcy can be restored.  Be sure to come back next week so we can kick September off on the right foot!  Until then, take care, stay safe, stay strong and I'll catch y'all later!
Posted by jonsstuff at 12:00 AM No comments:

We are back and halfway through August.  Not a very typical summer in any respect, but we are still here and as such, I still got some art to post.  If kittens with attitude are your cup of tea, then boy are you in luck today!  Why?  Scroll down and see!  Enjoy... 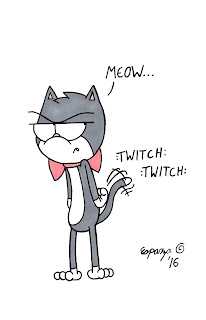 Uh oh.  When a cat twitches its tail like that, that's usually a sign that it is time to move on!  Attack kitties can be quite dangerous when provoked and will often go right after your big toe!  It certainly does pay to keep some pouncy treats and catnip on hand for just such an occasion.  Today was another entry from the Twitter art collective PinchPunchPost.  The theme was a cat, and having been around them most of my life, inspiration didn't take long to strike with this one.  Cats are some of the goofiest critters around and it's not hard to see why so many cartoonists use them.  They are living cartoon characters!
Well, one more week to go and then August 2020 will be in the books.  Come back next week and see how it all wraps up before fall!  Until then, take care, stay safe and I'll catch y'all later!
Posted by jonsstuff at 12:00 AM No comments:

We are back CRAZIES!!!  Limping through August, but still hanging in there!  We got even more inspired silliness to share with you today, so let's cut the chit chat and hop right in!  Enjoy... 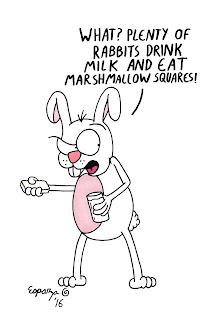 Sheesh Rabbit!  If it weren't for the belly and ears, you'd be nothing more than a floating face!  But honestly now, who DOESN'T enjoy a good marshmallow square every once in a while?  Today's theme came from PinchPunchPost back in 2016.  Simply put, it was a white rabbit, so I decided to have a little more fun with it and add some milk and a marshmallow square for good measure.  For those wondering why I didn't throw any mayonnaise in for added laughs, well, mayonnaise is just straight disgusting!  The mere thought of it is... BLECH!!!
That's all for this week, but fear not!  We're letting the cat out of the bag next time for some real fun!  Until then, take care, stay safe and I'll catch y'all later!
Posted by jonsstuff at 12:00 AM No comments:

BUBBLE AND PALS FLOAT FOR A PAL!!!

Welcome to August CRAZIES!!!  Hopefully you are all staying safe and finding ways to be occupied.  Not a whole lot of new things to report on any front, but I do have some new (To this blog!) art to share with you all, so why not slip right in, eh?  Enjoy... 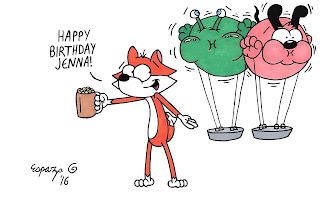 Oh Bubble, Bubble, Bubble...  That's no way to treat your friends!  I know you promised Jenna some balloons for her birthday, but wouldn't it have been easier to just buy some instead of inflating Picpak Dog and Mr. Blob?  Of course the answer is YES, but it's much more fun this way!  This was a birthday greeting on Twitter I did for my dear friend, Jenna Belding.  Jenna is the sister of Picpak Dog creator Kim Belding, who's certainly no stranger to these CRAZY parts having done numerous guest comics and fan art over the years.  When it's somebody's birthday, we always try to do a little something for our pals to give them a good laugh and what's funnier than root beer and cartoon balloons?  Hopefully Jenna still remembers this and still gets a good chuckle out of it!
Well, that's all for now.  We'll back next week with some new art that could definitely use a bit of color.  Until then,  take care, stay safe and I'll catch y'all later!
Posted by jonsstuff at 12:00 AM No comments: