MONKEYING AROUND WITH MIKE AND MINDY!!!

Well, we've reached the Halfway point of the CRAZYVERSARY.  Oh why oh why must time fly?  Well, we can't be too sad.  After all, we have another great Guest Strip up and ready, this time by a cartoonist whose CRAZINESS rivals even mine!  I'm speaking of course about none other than Joshua Hauke, creator of the Tales of the Brothers Three! 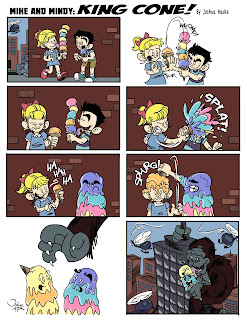 Leave it to Mike and Mindy to go from one source of trouble to another!  Apparently the sharing lesson they learned as babies didn't stick!  Oh well.  They do look tasty though!

Talk about nailing it!  Everything about this strip screams M&M!  From the gag to the pacing, just an all around solid comic!  Joshua is another good friend I made because of Twitter and had the pleasure of finally meeting last Fall at the Long beach Comic and Horror Con.  Our booths were near one another and it didn't take long to for us hit it off!  His style is very unique and his stories are a fun reminder of what it was like to grow up with siblings.  CRAZYVERSE faithful should already be familiar with Josh's creations as the Brothers and their monster, Mook, all appeared in my Comic Con's Most Wanted Vol. 2 strip last Summer.  I also did a comic last Summer for Josh celebrating his comic's Anniversary which can be seen here!  Thanks again Josh.  You really "Reached the Top" on this one!

Alright folks, that does for Week 2.  Thank you so much to all the wonderful artists who contributed Guest Strips and Fan Art!  You are all so awesome and I admire and respect every one of you!  We got even more fun coming next week as the CRAZYVERSARY continues!  In the meantime, take care, and I'll catch y'all later!
Posted by jonsstuff at 12:01 AM