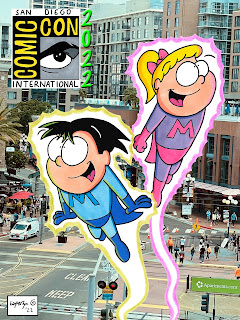 We have made it my CRAZIES!!!  We have FINALLY made it to Comic Con 2022!  It's been a very long time coming and I can't even begin to convey how excited I am!  Which seems like a good time to transition into the post, don't you think?  As we look back, helpful tips and tricks will be peppered throughout as well as at the end of the post, denoted by the TIP tag!
The year is 2018.  The place is the San Diego Convention Center.  The event, of course, is Comic Con!  Hold on to your Batman underoos and crack open a Code Red Mountain Dew, because the CRAZY COMIC CON COUNTDOWN is a go!  Enjoy... 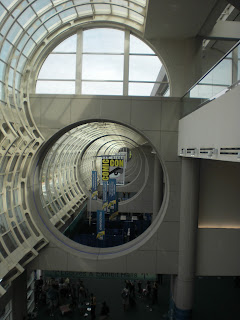 First off, the obligatory shot of the SDCC logo throughout the circular support!
TIP: This is a very popular photo op for many con goers and their are plenty of safe ways to get it, namely on the very slow moving escalators. Please don't hang over a railing just to get a picture.  It seriously ain't worth the risk! 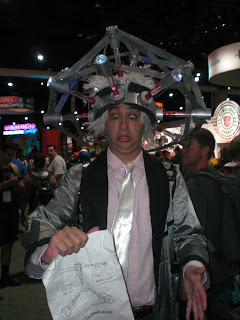 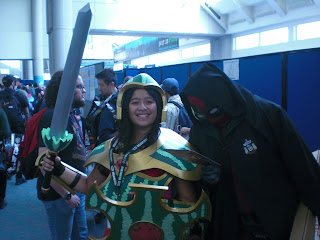 Deadpool meets Sandia, The Watermelon Warrior!  My niece Kristen had long wanted to cosplay and finally got the opportunity in 2018! Her watermelon armor was quite the challenge to build, but it looked so cool when it was done!  Everybody wanted their picture taken with her and as an added bonus, weeks later, a clip of her wearing the armor was on the Jim Jeffries Show!
TIP: For those of you new to cosplaying, bear in mind you'll have to hit the restroom at some point, so try to keep things simple in your costume design so that the costume is easy to get in and out of.  Having a pal tag along as a handler isn't a bad idea either! 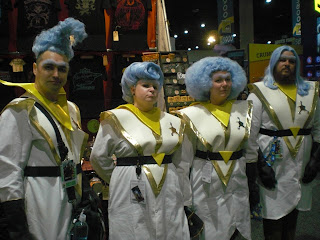 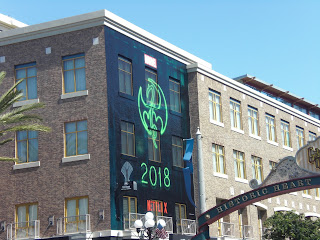 As always, ad space is at a premium at SDCC!  These buildings make a fortune off of having these giant posters plastered all over them! 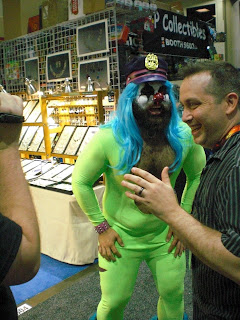 Whatever you do, do NOT give this guy cocaine! 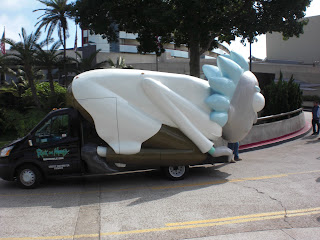 You never know WHERE the Rick Mobile will show up?!?  Actually, it typically winds up behind the Convention Center at the Adult Swim Block Party, after making the rounds!
TIP: As of this writing, there's yet to be any confirmation that Adult Swim is returning to their usual spot, but the best bet is that they will.  It's also literally adults only, so no kids! 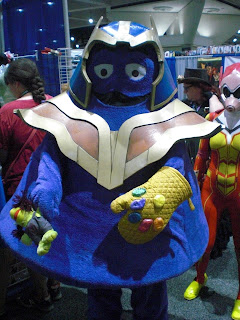 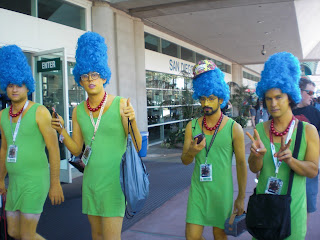 The Marchin' Marges were out on patrol outside the building and around Downtown!
TIP: The best place to get cosplay pics isn't always inside the Convention Center.  Outside the lobby doors and really all around Downtown and at the offsites are some of the best places you'll find to have chances at getting some truly great shots! 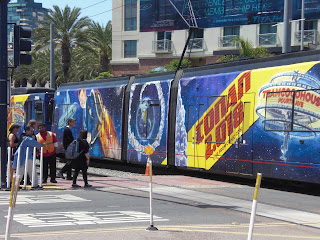 Remember that thing I said about ad spaces being at a premium during the show?  Well, the trolleys get in on it too!  Conan O'Brien's show always took full advantage of this!
TIP: As of this writing, it's not looking very likely that Conan's returning to SDCC.  With his show ending and Warner more or less killing all original programming on their cable networks, despite promising specials, the future's looking kind of bleak. 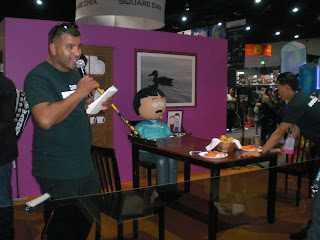 Comedy Central did their booth up rather interesting in 2018 with a South Park trivia contest where contestants had to avoid getting vomited on by Randy Marsh.  Needless to say, the line was pretty long. 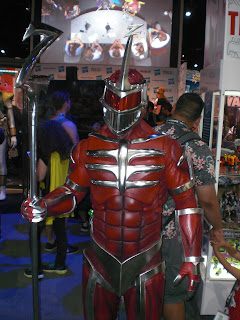 Lord Zedd is here and not too happy with the lack of Power Rangers media on TV! 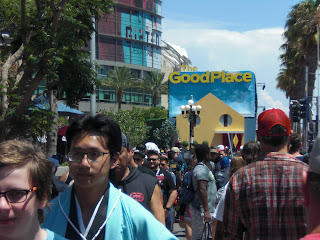 The Good Place had LONG lines! Never  got to experience this one!
TIP: Despite the Tin Fish recently being sold, there WILL be an event hosted by NBC before the new operators start changing things over.  The lines tend to be very long with some waiting as long as five hours WITH a reservation for the 2019 edition.  Point is weigh the risks and the rewards before hopping in any lines! 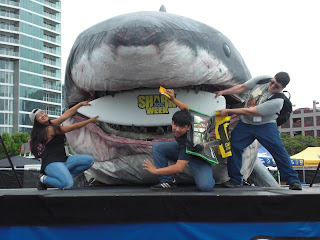 Me and my brother's kids really wanted that surfboard, but Sharzilla had other plans!
TIP: The Petco Park Interactive Zone IS back and, as always, IS free!  Not much has been revealed as of this writing, other than Nintendo has a rather large activation planned for it.  Does this mean the Nintendo Lounge at the Marriott is dead?  Hard to say.  Given the demand, they very well could be doing two different spots.  Guess we'll see come Thursday! 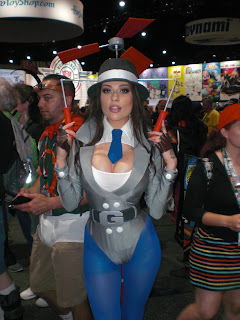 For those of you who needed to cross Sexy Inspector Gadget off of your cosplay bucket list, here you go. 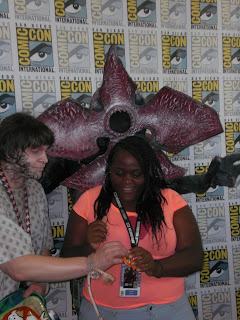 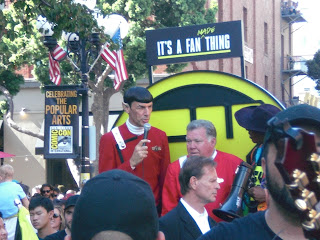 You can always count on the SyFy Street team to unearth some true gems, like these guys that look an awful lot like Leonard Nimoy and William Shatner!
TIP: As of this writing, no word yet on whether or not the SyFy Channel will be doing their cool block party deal again.  I'd certainly like to think they will, but the pandemic's changed a lot of stuff.  Hopefully they'll be back. 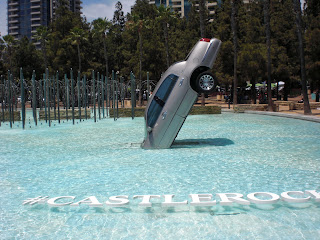 Damn out of town drivers! 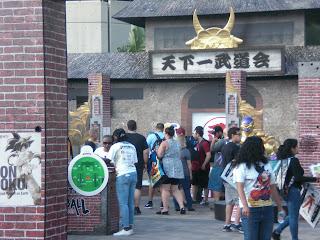 The Dragonball Experience held behind the Marriott was a lot of fun and had some great swag!  The DB team is REALLY blowing things up this year!  Bigger than Cell even! 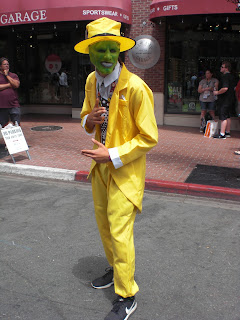 SMOOOOOOOOOOOOOOKING!!!
Had to end things with some color folks!
And that was Comic Con 2018!  A fun year over all with an impossible amount of things to see and do!  It's hard to top the proud feeling I had seeing my niece walk around in the watermelon armor I built for her and all the people going nuts over it!  As a creator, it's always a big deal to see such a positive reaction.  Hopefully someday I'll get to build some more cosplay armor!
And now for some final tips and tricks...
TIP: Bring water bottles and drink LOTS of it during the show.  The Convention Center has a new policy about not providing water unless a client pays for it, so refilling at water coolers in rooms may not be an option this year, so heads up.
TIP: Wear sunblock and re-block regularly, especially if you're doing the outdoor activities.  San Diego's a tourist spot for a reason.
TIP: Wear PROPER shoes!  No sandals or crocs. Feet are gonna be stepped on, it's the nature of the beast, so dress accordingly!
TIP: With so many people in one spot, cell service ain't gonna be the greatest, so don't expect to get too many calls or messages out.  Also, you probably won't be doing too many social media updates either, so be prepared.
TIP: Bring cash!  While many booths do take credit and debit now, WiFi at the Convention Center is far from reliable.  Most vendors prefer cash for that very reason, so keep that in mind!
TIP: Be wary of scammers!  Plenty of people out on the streets of Downtown are looking to score some quick cash from unsuspecting victims.  In particular, be aware of the guys selling CD's.  They're blank.
TIP: Masks ARE a requirement, vaccinated or not!  COVID is still a thing folks so be wary of the people you're around and follow the con's rules.  If cosplayers can wear masks, then so can we!
TIP: Be courteous!  SDCC is a massive undertaking with LOTS of people, both attendees and workers, being involved.  Yes, there's always gonna be a few bad eggs that slip between the cracks, but it's much easier to ignore a pest than engage them.  And if someone's being a problem, report them!  Plenty of overzealous security guards are on patrol and happy to oblige!
And that's all for this week!  As I mentioned above, cell service is shady at SDCC, so I'll update when I can!  For those going, have a safe and fun experience and be courteous to your fellow con goers.  There's no reason we can't all have fun at the greatest show on Earth!  And if you see me, say hi!  Until next time, take care, stay safe and I'll catch y'all later!
Posted by jonsstuff at 12:00 AM