SPINNING INTO MAY WITH MIKE AND MINDY!!!

Well folks, here we are, a brand new month.  And as usual, that can mean only one thing: BRAND NEW COMICS AT THE CRAZYVERSE!!!!  So instead of some long, draw-out intro, I'm just gonna cut right to the chase!  So here they are... Enjoy the comics!

First up, Here's Mike and Mindy... 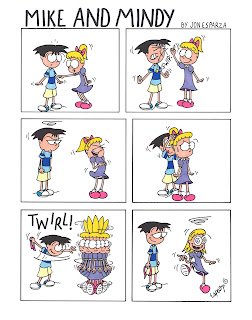 Brings a whole new meaning to the phrase "Head Spin," don't it?  I'm quite proud of the spinning gag.  The illusion of movement on the printed page isn't easy to achieve.  Some artists like Jim Davis (Garfield), Jimmy Gownley (Amelia Rules!) and Johnny Hart (B.C., Wizard of Id) are quite good at it, but the true masters, though, were Antonio Prohias (Spy vs. Spy) and Don Martin (MAD Magazine, Cracked Magazine).  These men just had a way about their work that can never be duplicated.  Mark Stokes (Zombie Boy) recently called me a "Master of movement," which is without a doubt the best compliment I have ever received as a cartoonist.  I admit, I do actively try to hit that level in terms of the fluidity of my gags, but I'll never be as good as Martin and Prohias.  They were in a class of their own.

Up next, here's special new Mushrooms, back in it's old, page-long format... 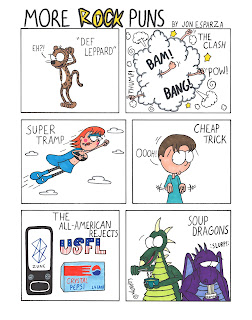 This edition follows up last year's Cheap Puns Rock Edition, a fairly popular post among the CRAZYVERSE! faithful.  Blogger's new image viewer doesn't give you much to work with, but I'm confident all the jokes will still come across.  There's only one panel that concerns me, so I hope it's obvious that the "Cheap Trick" gag is a dude doing the old "Severed Thumb" trick that kids rarely fall for!

Recently, I did some fan art for Mark Stokes' Zombie Boy.  It's a very funny strip about a goofy boy who turns into a zombie after a trip to Voodoo Island, and his equally goofy friends!  Without question, it's one of the funniest comics on the web, and I highly recommend it to everybody, especially if you want to see my drawing!

Well, that's all for now.  Yesterday was a tough day for the city of San Diego, as we lost one of our greatest heroes, Junior Seau.  So next week will be a special tribute to the man who did so much for so many.  Until next time, take care and I'll catch y'all later!
Posted by jonsstuff at 11:43 AM