LIVE FROM THE CRAZYVERSE, IT'S THE CRAZY CARTOON EXPERIMENT 5!!!

Welcome back!  It's that time again!  The return of the CRAZY CARTOON EXPERIMENT!  This will go down as the smallest turnout we've had, a factor I largely blame on Saturday Night Live for not being funny or relevant in many ages!  But, some folks still remember it used to be funny, and for them, I am thankful!  So let's sit back and remember the good times!  Let the CRAZINESS begin! 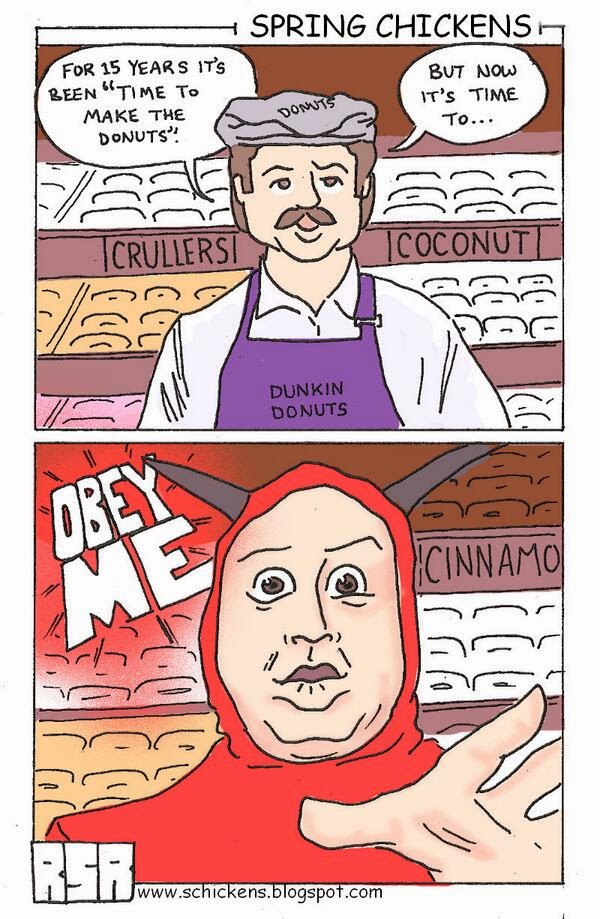 First up, Ryan Rogers pays homage to the great Jon Lovitz, without question my all-time favorite SNL cast member.  And anytime he threw on the red pj's and horns, it was laugh central!  Hanukkah Harry will always be Lovitz's standout for me though! 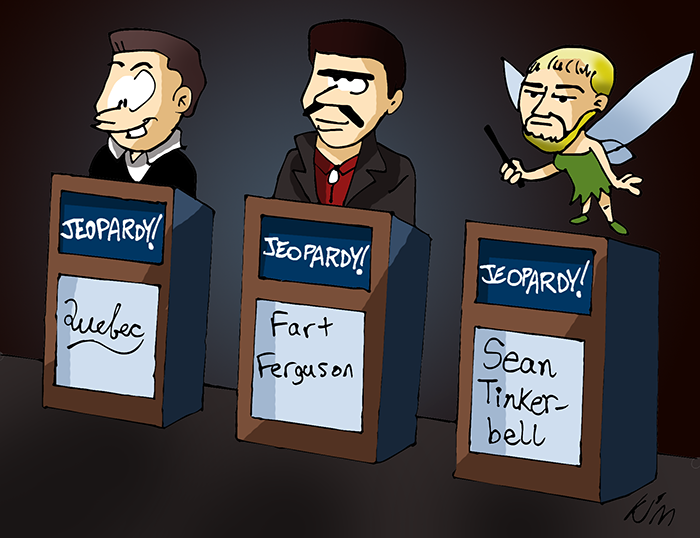 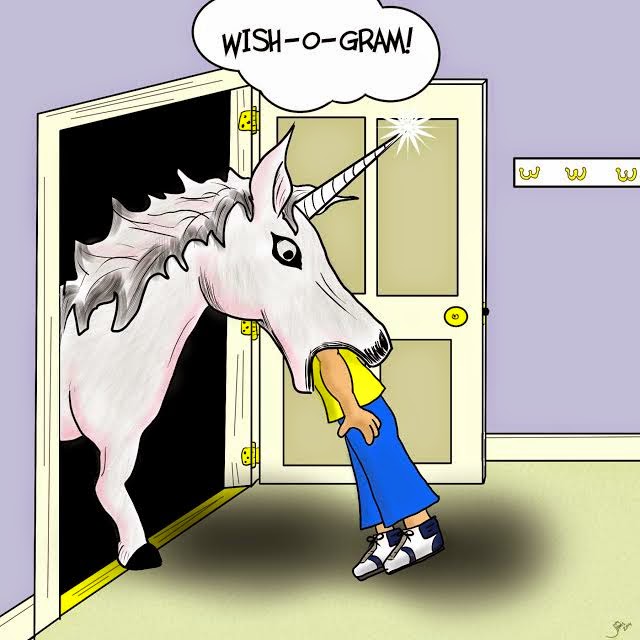 Jim Haas presents a true SNL treasure: The Door Shark!  At the time, the movie JAWS had people terrified to go t the beach, so SNL took it up a step with the shark going door-to-door.  And since we all know Unicorns are super vicious creatures, it makes the perfect switch! 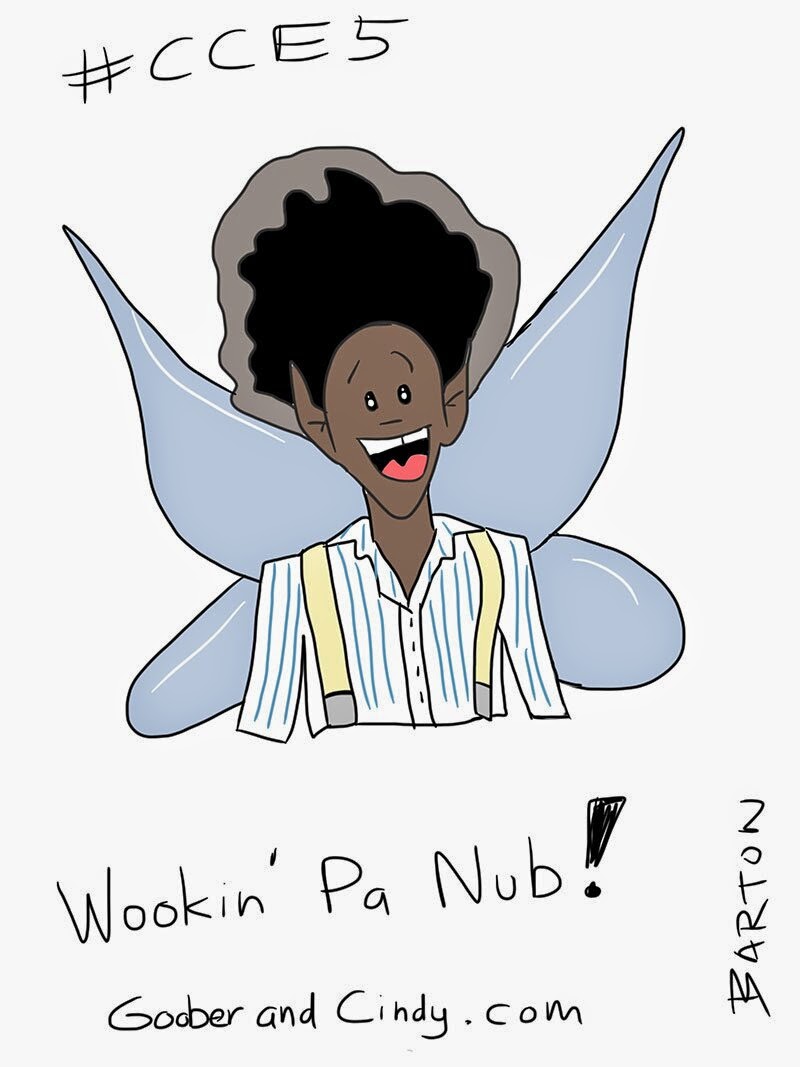 Daniel Barton clearly remembers a time when Eddie Murphy ruled SNL!  And anytime the Our Gang theme hit, everyone was ready to laugh!  "Buckwheat Gets Shot" is still one of the funniest damn things I've ever seen!

Me, Prince Charming and Shrek at the "Chip 'N' Dale's Audition" 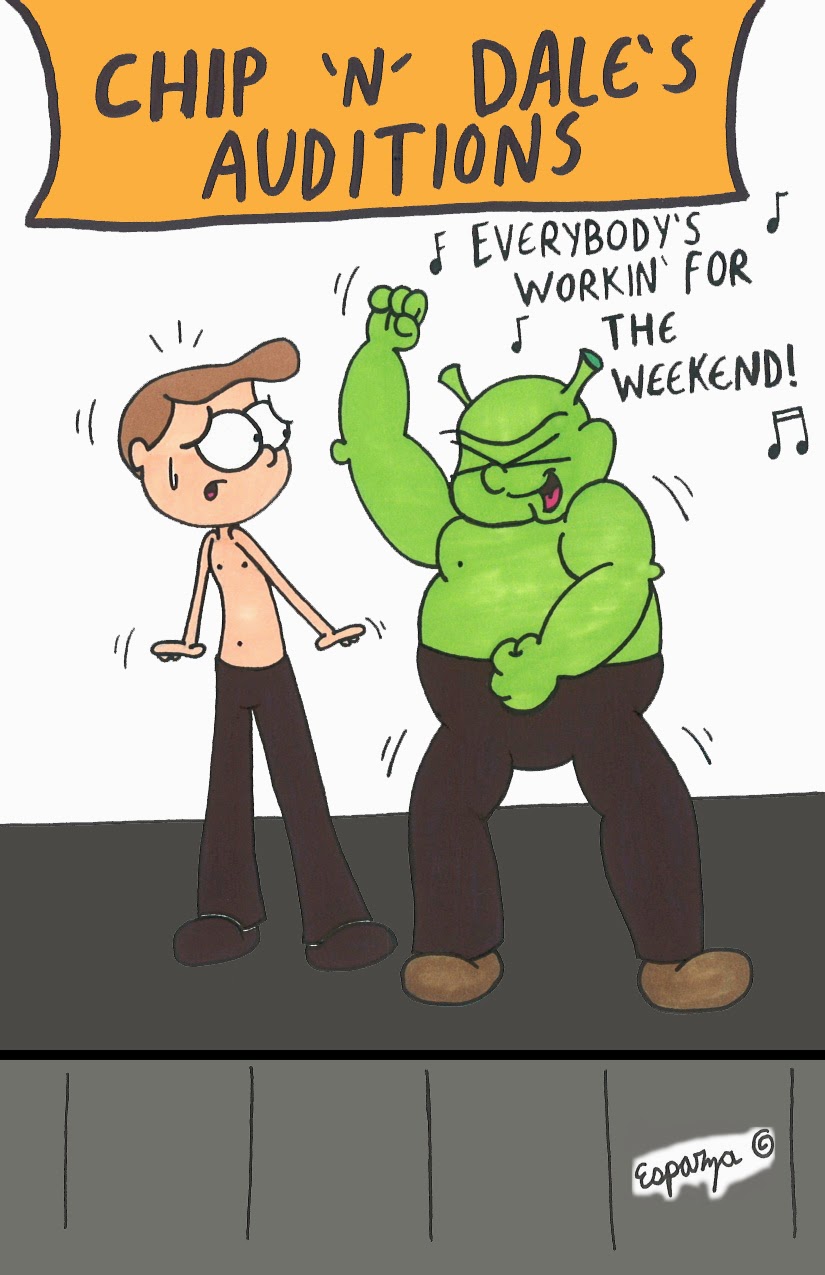 The Chip 'N' Dale's Audition.  For better or worse, it was the defining moment in the career of Chris Farley, and who better to pick up the mantle than Shrek, a character Farley was supposed to play! 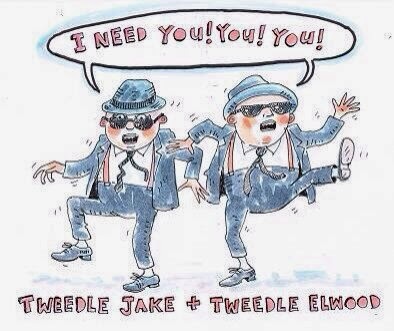 That's right folks!  The Blues Brothers started on SNL and Simon, a CCE veteran was very keen on that!  Even more remarkable: There is no SNL in England (where Simon lives)!  And he picked some great characters to switch in with! 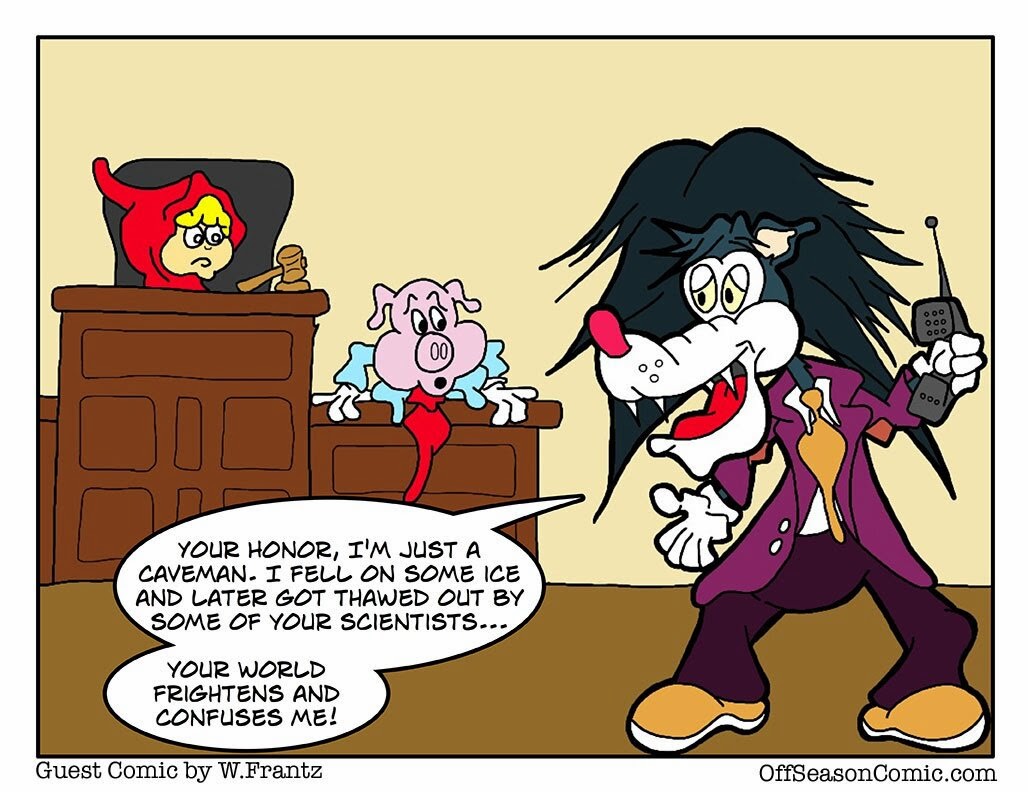 How I was hoping someone would do a Phil Hartman bit, and Warren never disappoints!  His character designs are so hilarious!  It's always a thrill to see what Warren's left in my inbox, and this was no exception.  The spirit of Hartman lives on!

Thomas Barnett, The Little Miesters, "Bigfoot at the Continental" 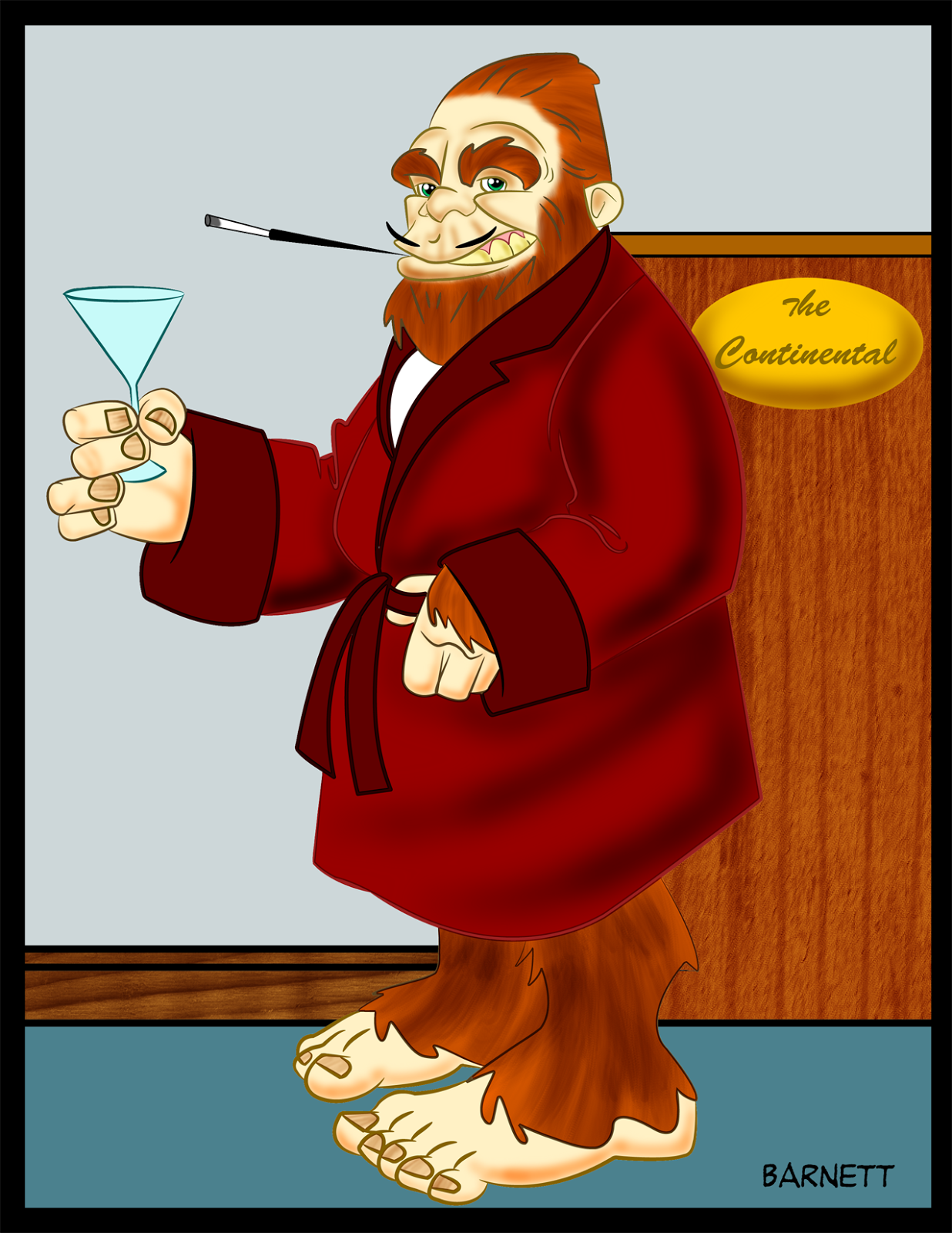 Next up, Thomas Barnett delivers another fave as Bigfoot takes the place of the always hilarious Christopher Walken!  With the robe and 'stache, ol' Bigfoot looks quite dapper!

E.W. Crowe, The Hat And Fat, Pinocchio doing... Well, I think it speaks for itself! 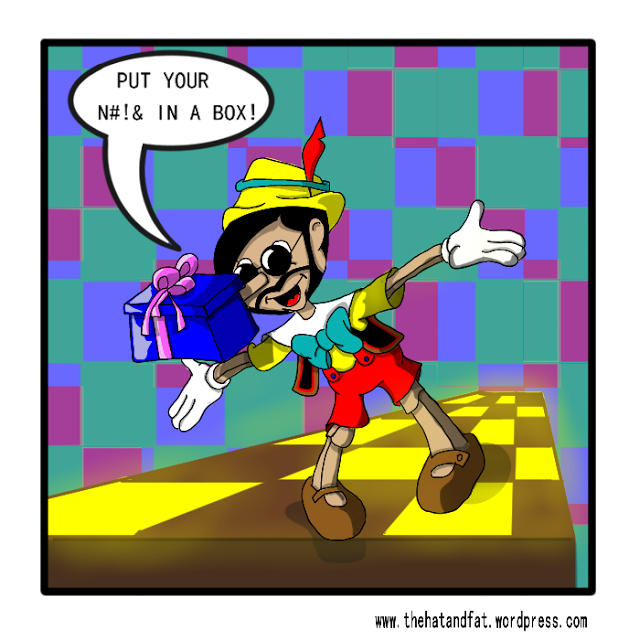 CCE newcomer E.W. Crowe delivered this insane artwork, and what will likely be the most talked about piece of the experiment!  Truth be told, I've never even seen this skit!  It came out after I gave up on SNL back in 2002!  Still, it's very funny!  Great way to close it out!

And so ends another CRAZY CARTOON EXPERIMENT.  And guess what?  It's already time for the new theme!  Y'all ready?  Here it is:

The inspiration for this theme comes from two of my fav's on the web, Dawn Griffin and Scott Warren!  Dawn did a cereal box-themed fan art contest (Which I won!) and Scott's comic is all about cereal mascots!  And since the Fall always brings about those ultra cool monster cereals, what better time to unleash this theme!

The guidelines are even simpler for this theme!  You merely have to do a box cover!  No strips or full pages.  Just a simple cereal box front.  And, as usual, the entries MUST be all-ages.  Family site after all, so no adult humor!  Other than that, the deadline is August 20th, so go nuts!

Well folks, that's all for now.  We'll be back next time with a New Mike And Mindy that'll really be "Dropping" some laughs on everyone!  I'll also have pics from WonderCon to share!  Until then, take care and I'll catch y'all later!
Posted by jonsstuff at 12:00 AM