TIME TO FEEL THE BANG!!! WITH THE CRAZY CARTOON EXPERIMENT!!!

After six long months, the CRAZY CARTOON EXPERIMENT is back!  For those of you new to the blog or merely forgot, the premise is simple: A theme or subject is given, and numerous artists draw their interpretations of it.  We've had some wild themes in the past, but this time around may very well be the CRAZIEST: "Exploding Underwear"...  Needless to say, we got some very "Combustible" entries!  So sit back and enjoy as we kick off the first part of the Fourth installment of this wild project! 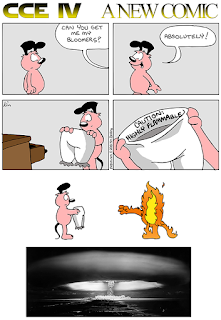 First up, infamous Pepsi hater and Picpak Dog creator Kim Belding who actually helped inspire the theme!  You see, Kim loved the exploding bloomers gag from Mike And Mindy #32 (August 2012), and said I should put 'em in every comic!  I laughed but noted that I just couldn't come up with that many ways to explode underwear, but it would make a good CCE theme down the road.  Kim eagerly volunteered so here we are!  And just like always, Kim "Blasted" a winner! 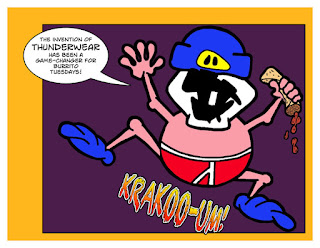 Up next, my CRAZY "Brother" from the Great White North, Off Season creator Warren Frantz!  Here he took his character Hardy and gave him the ultimate in underwear protection: THUNDERWEAR!!! Finally!  A product us dudes can really benefit from!  I'd patent that one Warren.  Those could really "Explode" onto the scene!

And here we have my entry!  I remember hearing a while back about two eight-year-olds that invented underwear with a tear-away strap that were supposedly wedgie-proof.  Not a bad idea, but can't we do better than that?  Here, I present underwear that's not only wedgie proof, but will REALLY give bullies something to think about!  I'm already working on a newer version that hunts down friends and relatives of the bullies, just to drive the point across further! 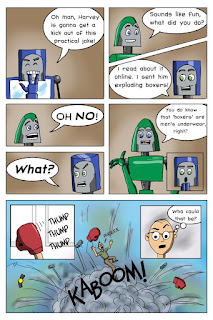 Here we have CCE newcomer Jim Haas, creator of Nate The Robot.  In this entry, the bots take exploding "Boxers" a bit too literally and, well... You know that's gonna sting tomorrow!  Let's just hope they don't try "Combing the Desert" next! 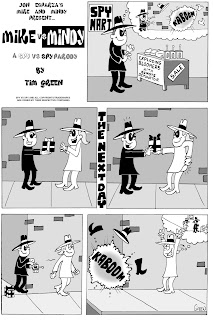 Vinnie The Vampire creator and very good friend Tim Green is responsible for this brilliant homage to to the legendary Spy Vs. Spy and the not-so-legendary (Yet!) Mike And Mindy.  Mike knows just how much Mindy likes her bloomers!  Too bad she's a few steps ahead of him, much like their pointy nosed forbearers!  I gotta be honest folks, this is my personal favorite so far!  Tim really "Set it Off" here! 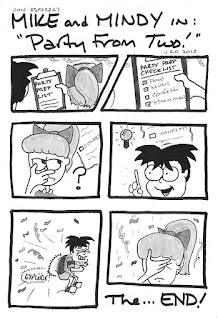 Crass Fed Comics mastermind Robert Deans sure knows how to get a party started!  Once again, Mike and Mindy get to do a guest spot as Mike reveals he too has a trick or two up his sleeve!  Or pocket in this case!  I can already see Rob face palming with this right up! 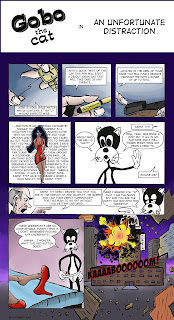 Next up is another CCE newcomer and very good friend, By The Fingernails creator Dave Schubert!  Big "Schooby" Cool teaches us a very valuable lesson when it comes to spy gear: ALWAYS PAY ATTENTION!!!  That and cats make rotten secret agents!

The Canadian invasion continues with another CCE rookie, Lunarbaboon Comics creator Chris Grady!  Here, he took the simply approach, and one that will no doubt make a lot of us gag if we saw this in real life!  (Seriously, have you ever seen your grandparents make out! *Shivers*) 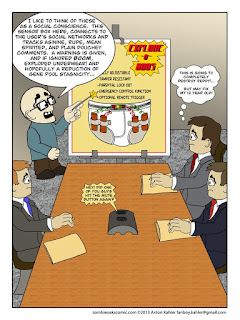 The newbies just keep rolling out here!  Zombie Oaks creator Axton Kahler decided to add a really personal touch in this one.  You see, some pals of ours are constantly harassed by the internet trolls that frequent a certain website.  Axton is no doubt stirring up a hornet's nest here, but kudos to him for having the guts to stand up for some very cool creators.

I think it might be easier to just say from here on out that the rest of today's participants are CCE rookies!  Up next, Benjamin Pernick of Turbo Sloth!  Here, he teaches us that even undies have feelings.  Let that be a lesson to you all: Free and easy ain't what it's cracked up to be! 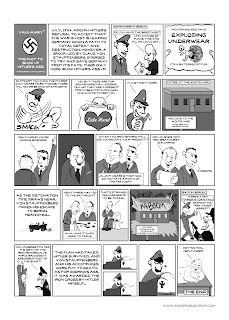 Up next is Mark Glavin of Adorable Crap. 70 years later and it's still fun to rip on Nazis!  This one might have been a bit adult for this site, but since it bashes Hitler, I'll let slide.  As Jon Lovitz says in Rat Race: "Well, Hitler had it coming!  What goes around comes around!"  Indeed.

Here we have artist Drake Tigerclaw of Victor 70, who shows that "Thunderwear" definitely seems to have some legs to it!  As the Tiger suggests, that is indeed a very cruel prank.  Kids today sure take things far!  Gotta love the payoff though.  Very original! 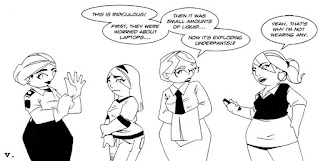 Last up, we have V. Barker of Chalky Hearts, who no doubt has given everyone a lot of ideas right now!  I guess that's one way to get around that.  Can't say I'd take this approach at airport security.  Quite frankly, I gave up on flying altogether. Too much of a hassle!

And thus we come to the halfway mark of the latest experiment.  But never fear!  We have even more coming next week as well as a some special Mindy fan art from the lovely Michelle Hernandez!  So get ready for even more "Explosive" comics heading your way!  Until then, take care and I'll catch y'all later!
Posted by jonsstuff at 4:30 PM