COVER YOUR EARS!!! PART 2 OF THE CRAZY CARTOON EXPERIMENT 4 HAS DETONATED!!!

Here we are, a day late but better than never!  We wrap up the Crazy cartoon Experiment this week with the second part of our fourth installment.  We still got a little bit of "Explosive" action left, so let's get to it! 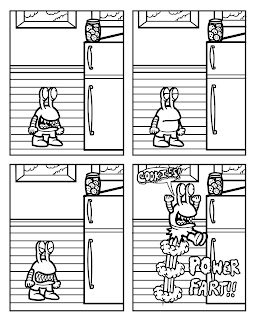 CAAATS! creator Matt Gross has returned for another go, and he certainly dropped a "Bomb" here!  What in Heaven's name has that thing been eating?  Looks like he could use some "Thunderwear" himself! 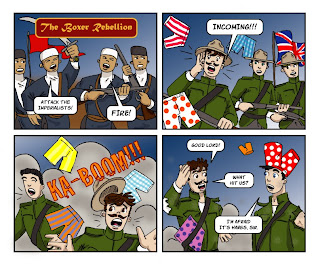 Casey At The Bat  creator Bob Glasscock enters the CCE with this look at how the Boxer Rebellion REALLY went down.  Next up, Bob plans to give the accurate treatment to the battle of Waterloo! 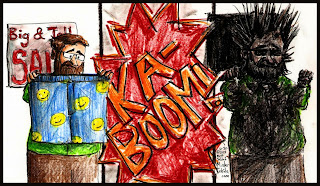 Matt Gajdos of the hilarious and often sweet Mister G Kids has provide this hilarious strip for his rookie effort!  Talk about getting a "Bang" for your buck!  Who knew big and tall stores could be so cruel?

Stephen McGee of the outrageous Rain Dogs comic makes his CCE debut (and scores some huge points with me) by giving Mike and Mindy a guest spot in his entry!  Leave it to Mike to overcomplicate things!  His butt's gonna be really sore when he gets back down... Provided he ever does! 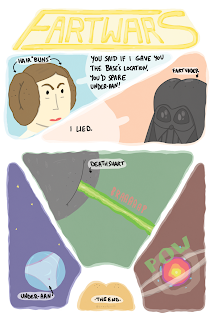 The always hilarious Crashsuit of the Robot Cake Tank returns to the CRAZYVERSE with this re-imagining of the destruction of Alderaan.  I wonder if the crew on the Millennium Falcon could smell anything when they came out of Light Speed? 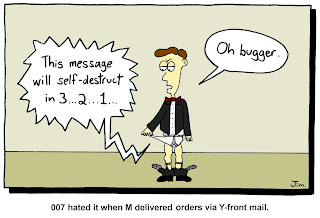 Brendan "Jim" Boughen of Cartoons By Jim sent in this Dandy.  Apparently 007 needs to be a bit kinder to M in the future!  On a side note, I had no idea the flap at the front of briefs was called a "Y-front."  You see?  The CCE CAN be educational when given the chance! 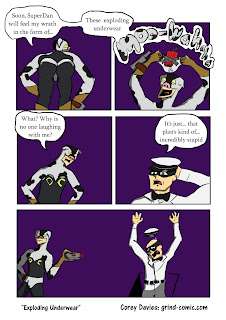 Finally, Corey Davies of Cosworth Grind enters the world of the CCE and "Drops" quite a strip on all of us!  Let that be a lesson to all current and future henchmen: Your job is to follow orders, not question them.  Regardless of how doomed your leader's plans appear to be.

And thus concludes the Crazy cartoon Experiment 4!  I hope you readers enjoyed these wild entries.  I think I speak for all my fellow creators when I say we had a great time drawing these.  And yes, there will be a Fifth one!  So if you want in, follow me on Twitter for updates and rules!  The next theme will be announced next month so stay "Tooned"!

Finally this week, the lovely Michelle Hernandez of Pen Hits The Pad sent in yet another piece of Fan Art featuring the one and only and ever so cut MINDY!  So sit back and enjoy as Mindy smells the roses... 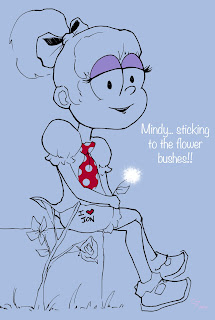 Mindy ought to get some sort of sponsorship deal.  She is clearly making bloomers fashionable again!  And what a sweet message.  I love ya too Mindy!  And the necktie, such a great touch!  Mere words don't do Michelle's art any justice.  She makes everything look so whimsical and sweet.  I especially love it when she draws my characters.  She makes them look like real kids.  It's a skill I wish I had.  Thanks again Michelle my Belle.

Well, that's all this week folks.  I'll be back next time with a NEW Mike and Mindy that'll really "String" you along.  There's also an "Explosive" New Splash Page celebrating the 4th Of July and loads of pics taking a look back at a past Comic Con (Yup. It's that time of year already!).  So "Toon" in next time!  Until then, take care and I'll catch y'all later!
Posted by jonsstuff at 2:49 PM