THE CRAZY CARTOON EXPERIMENT IS BACK AND FULL OF "HOT AIR" THIS THANKSGIVING!!!

WELCOME TO TURKEY DAY!!! Sadly, I can't offer you a marathon of Mystery Science Theater 3000 episodes, but I can offer you great fans more bags of gas than congress!  The CRAZY CARTOON EXPERIMENT has returned!  And this time around, the theme was "Turn Your Characters Into Demented Parade Balloons," and boy did my pals in the web comics realm deliver!  So sit back and enjoy the seventh installment of CARTOON CRAZINESS!!! 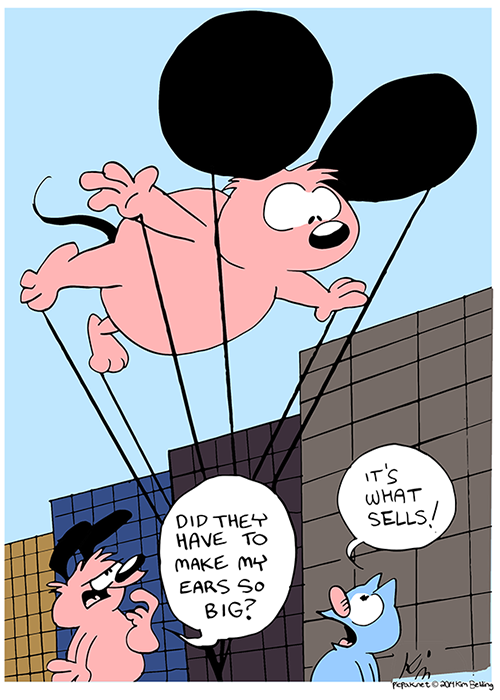 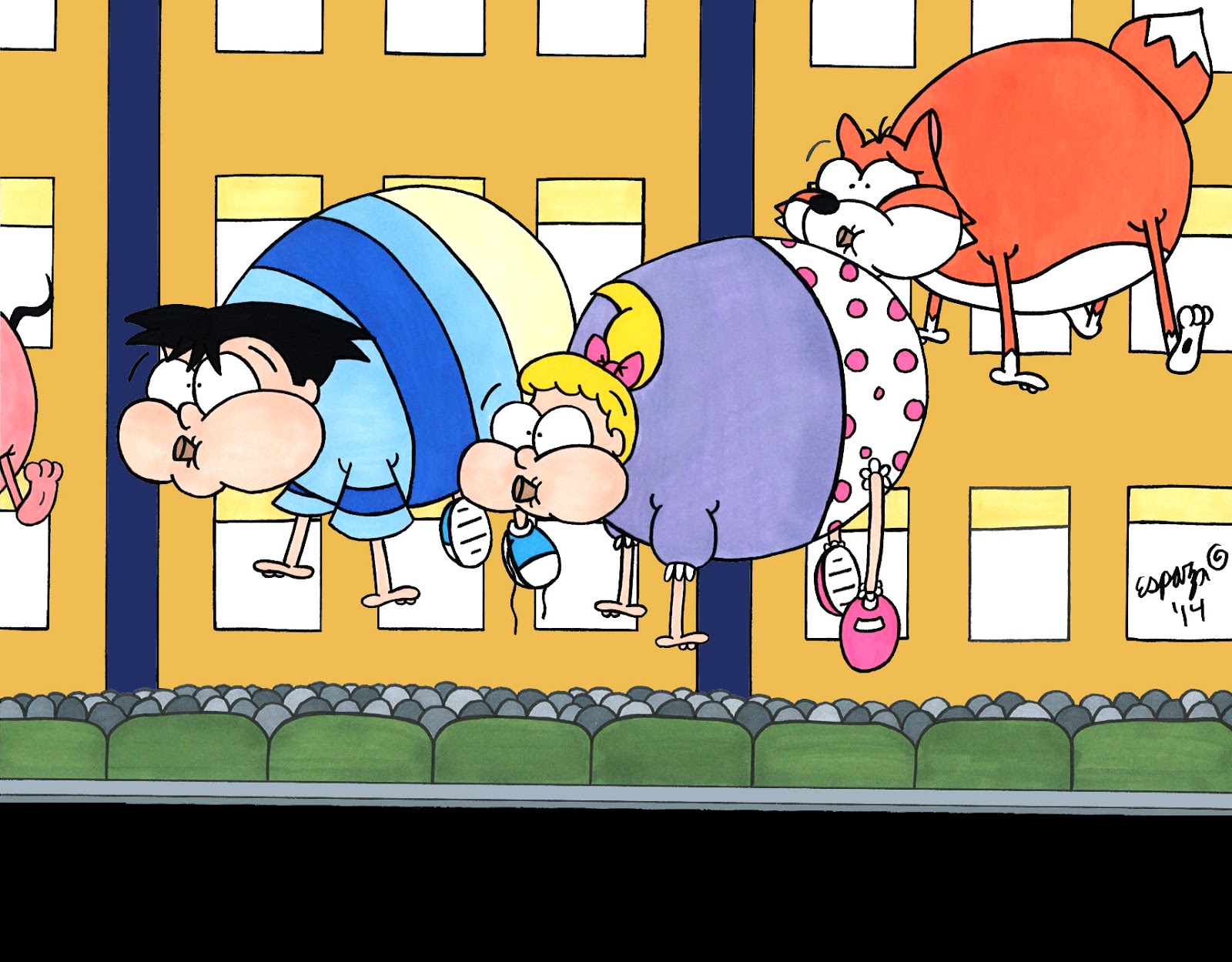 And here is my entry!  With Bubble being part of the CRAZY family now, he wanted in too, and immediately came to regret it!  And so marks the final time Mike and Mindy will ever be inflated.  A somber moment for sure! 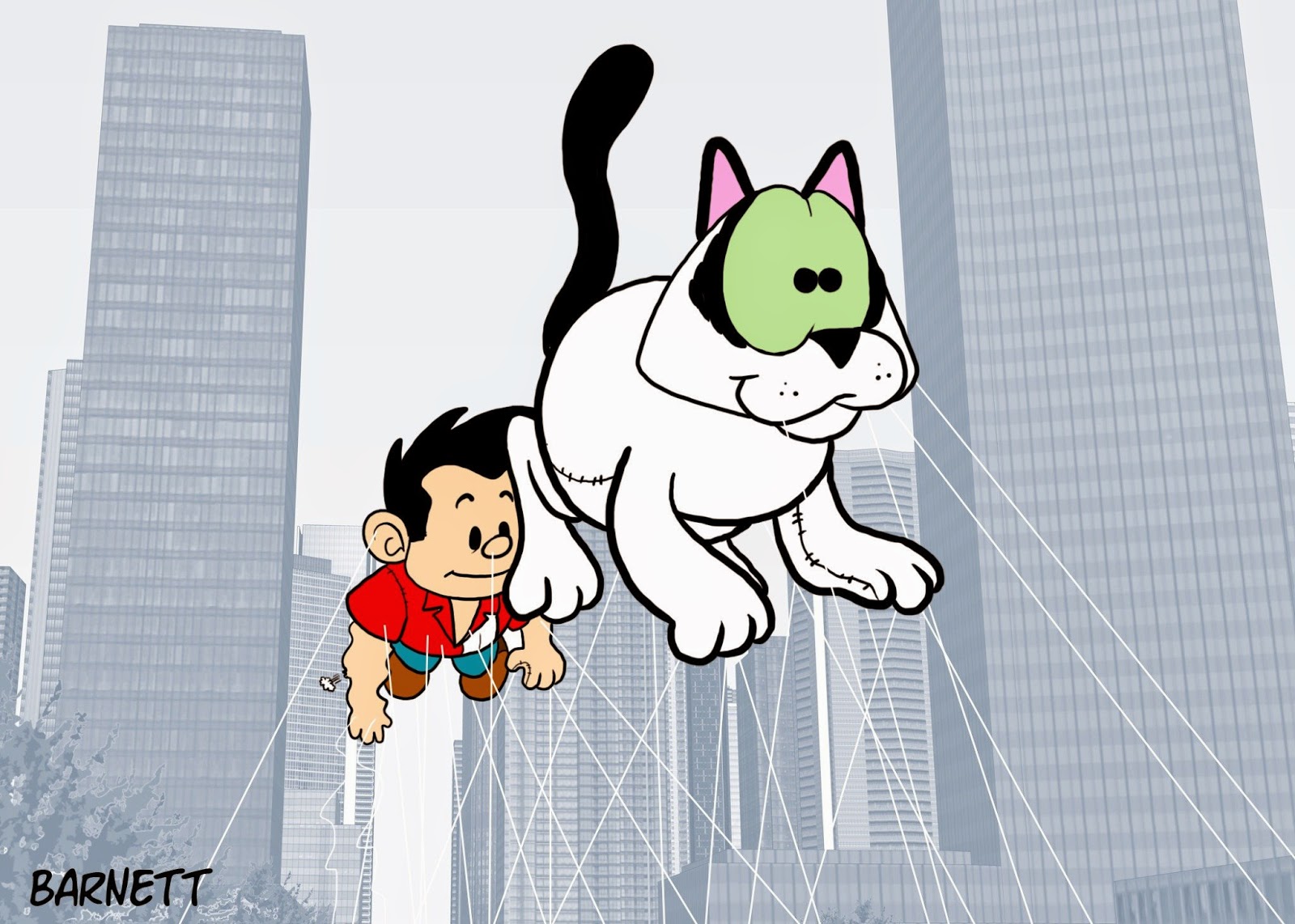 The next entry comes from good pal Thomas Barnett of the always hilarious Li'l Miesters!  Even in balloon form, Bean the cat has it out for poor little Ned!  Or rather "Big" Ned this time around! 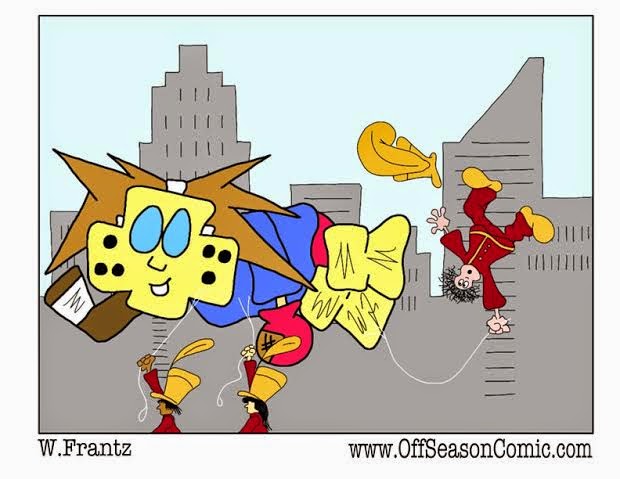 Next up is my brother from another mother -And Country!- Warren Frantz of Off Season!  Warren's been dealing with Helium a lot lately.  After all, it was him that took my Helium Challenge joke seriously and thus created a Twitter sensation!  And it appears one of Gully's handlers has been hitting the Helium hard himself! 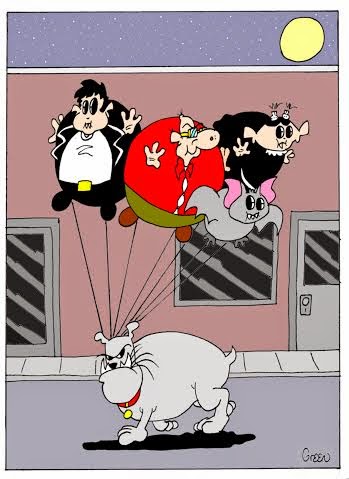 Tim Green makes his CCE return with his Puffed Parade of Pals from Vinnie The Vampire!  Can't help but feel bad for poor Vinnie here.  He's the only one in that bunch that DIDN'T deserve this!  And Belfry may very well be the first ever inflated cartoon bat!  And how did Bob the Bulldog escape this same fate?  As Tim explained it to me "Bob's nobody's balloon!" 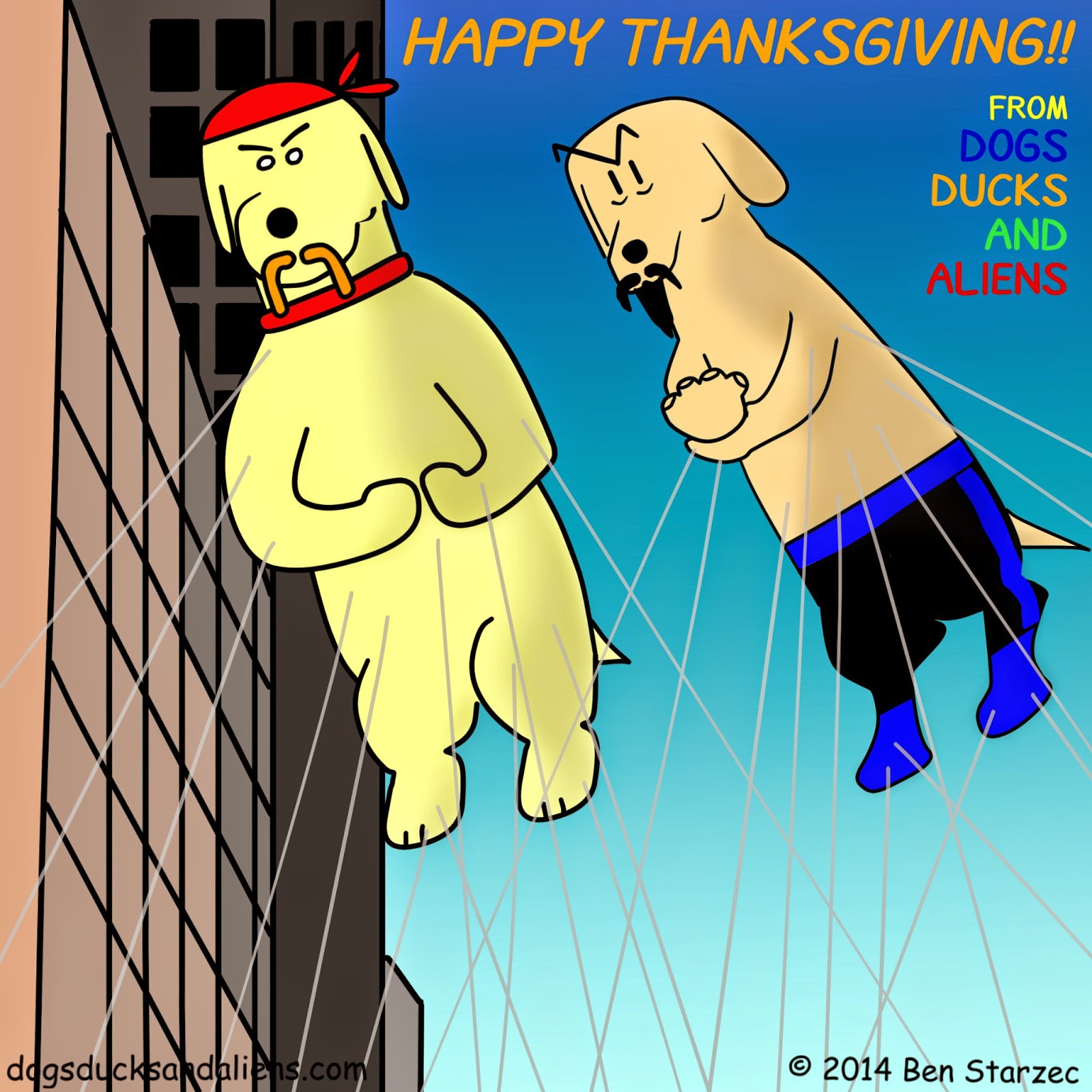 Ben Starzec of Dogs, Ducks And Aliens makes his CCE debut with a more traditional approach to a parade balloon.  And trust me, these two totally ran rough shed over the Macy's Parade last year after doing the "Doomsday Device" on Clifford the Big Red Dog! 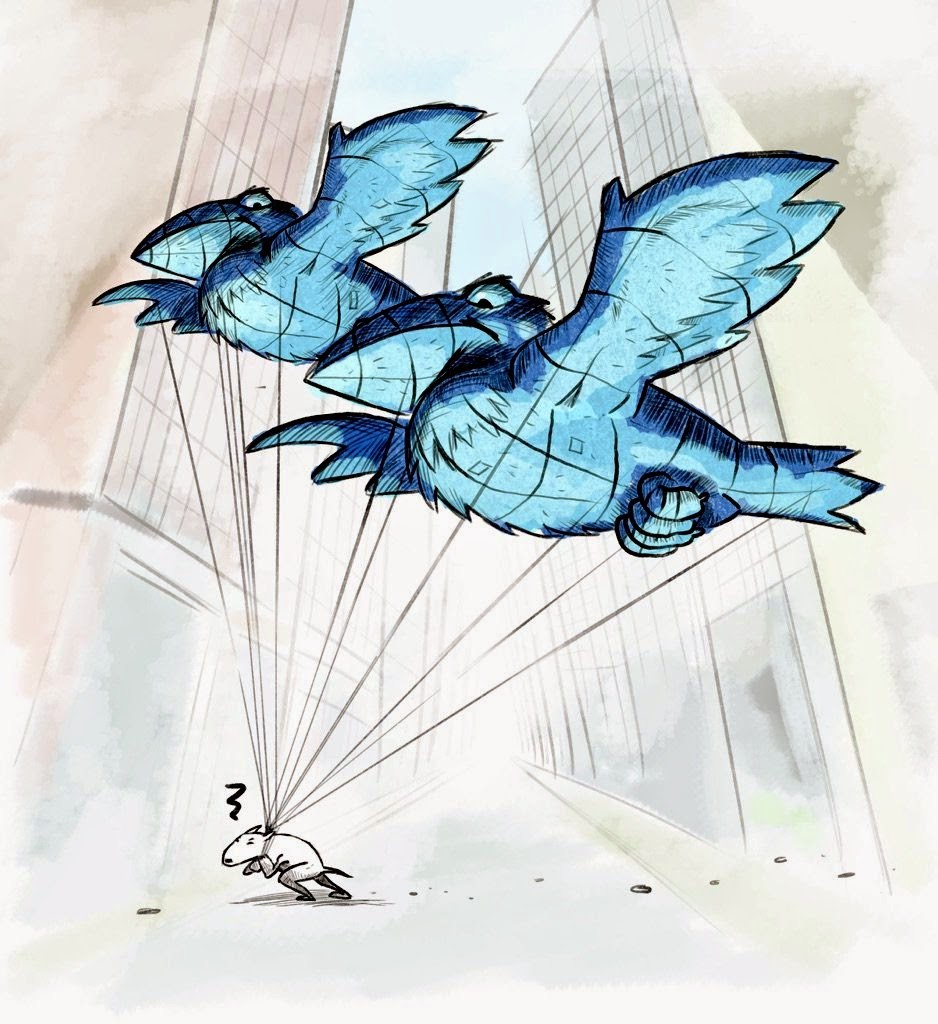 Next up is Darrell Toland of Stix And Bones is also making his CCE this go around by pumping up his crows Mo and Jinx!  The two greatest magpies this side of Heckle and Jeckle! 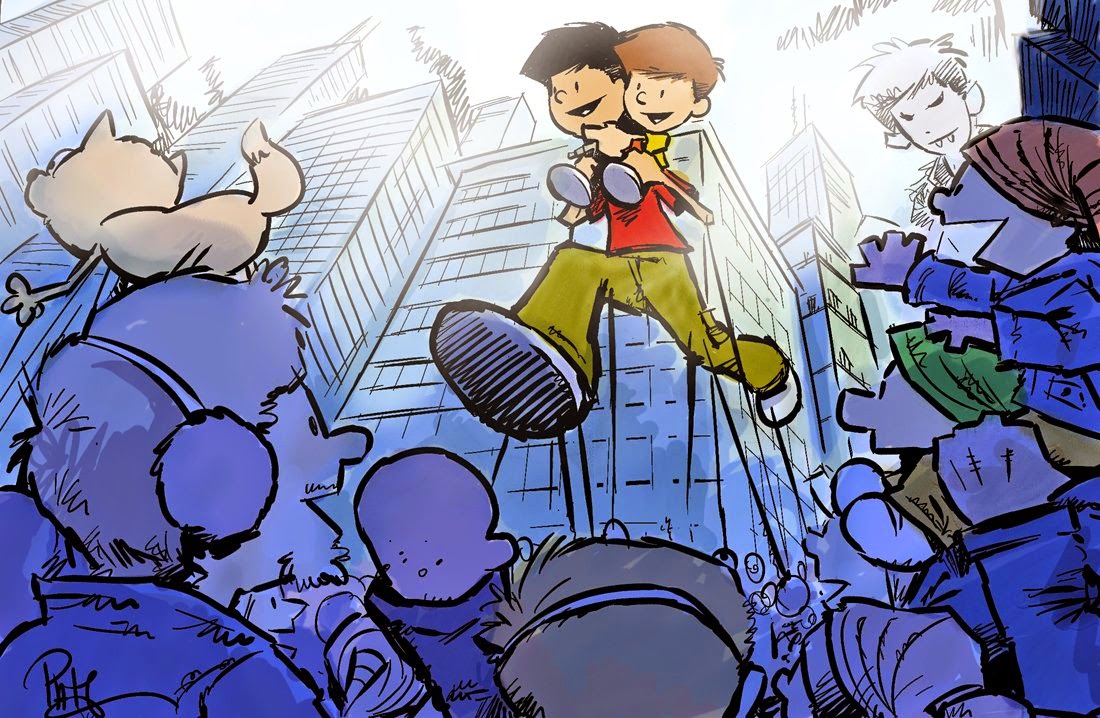 And now, making his long awaited return to the CCE, Jason Platt of Mister And Me!  Jason's whimsical style always amazes me, not mention makes me insanely jealous!  And if you look closely enough, you might even spot two familiar faces hovering above the crowd! 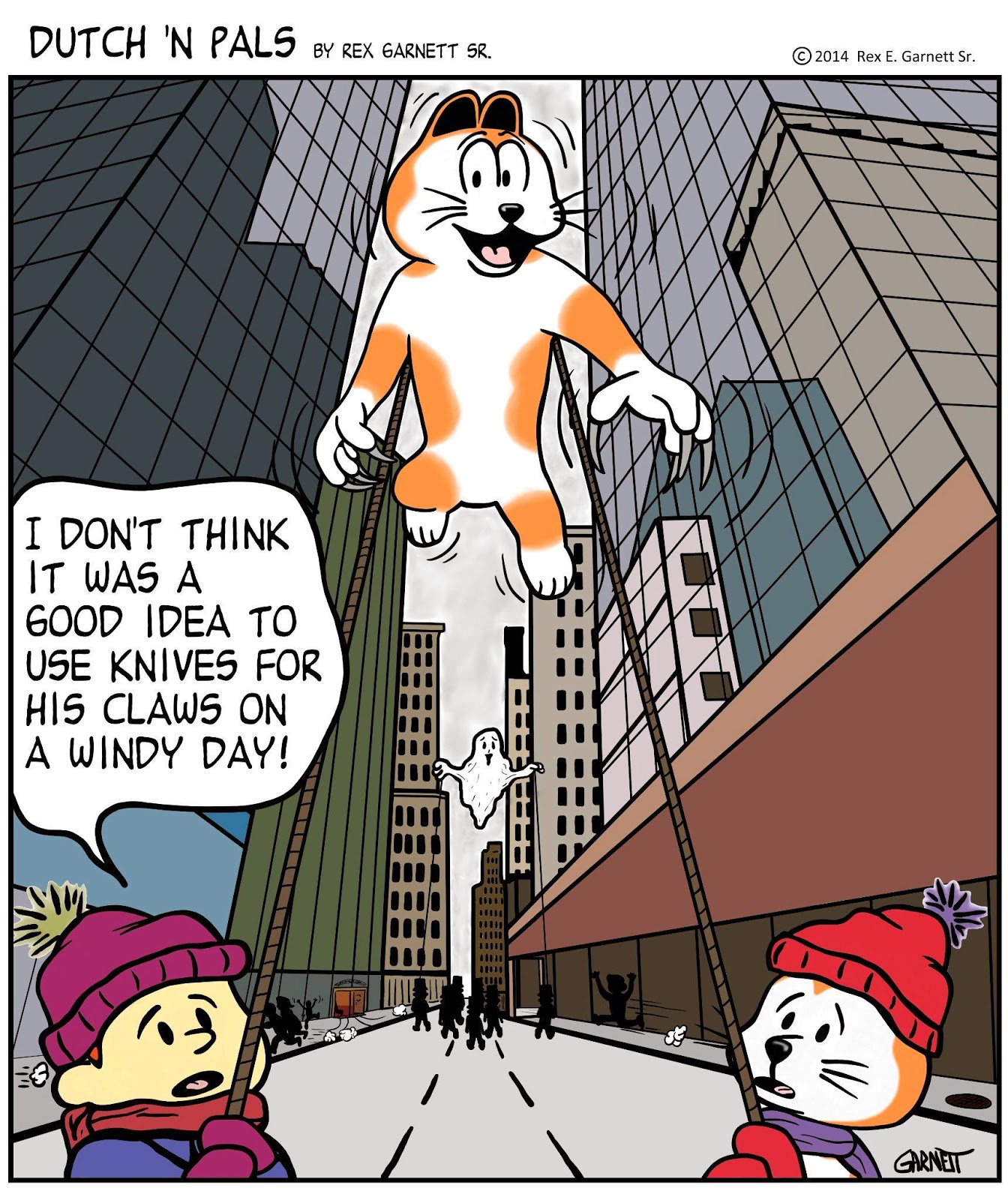 And now, we have another new recruit for the CCE, Rex Garnett, Sr. of Dutch 'N Pals!  Clearly this is a parade balloon that doesn't like sharing the spotlight with other windbags! 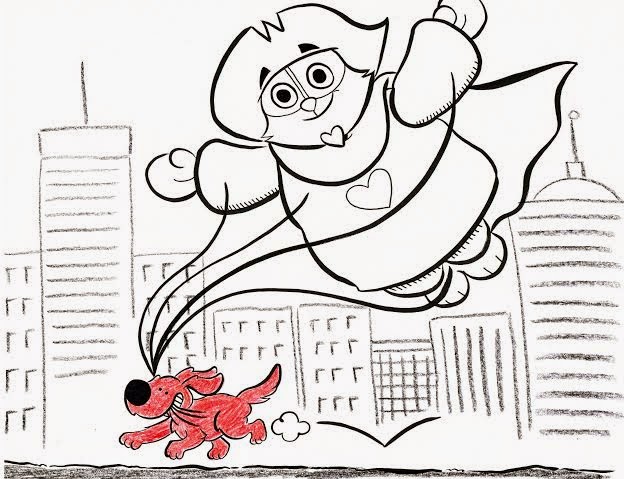 Another old pal, Jamie Cosley of Cody The Cavalier, makes his long awaited return to the CCE!  Jamie may be the best kids' cartoonist in the country today and it's always a pleasure to have him on board!  He also assured me the Cody Balloon is filled with the gas from 5,000 cans of Pepsi! 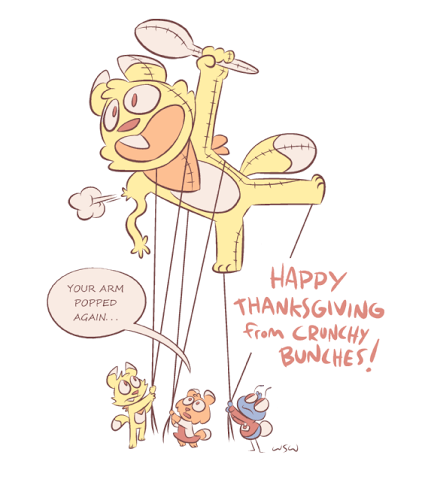 Scott Warren of the awesome and nostalgic Crunchy Bunches is also back for another round of CRAZY CARTOON madness!  And not surprising, Munchy forgot to patch certain spots!  Must've been Grimace seeking revenge! 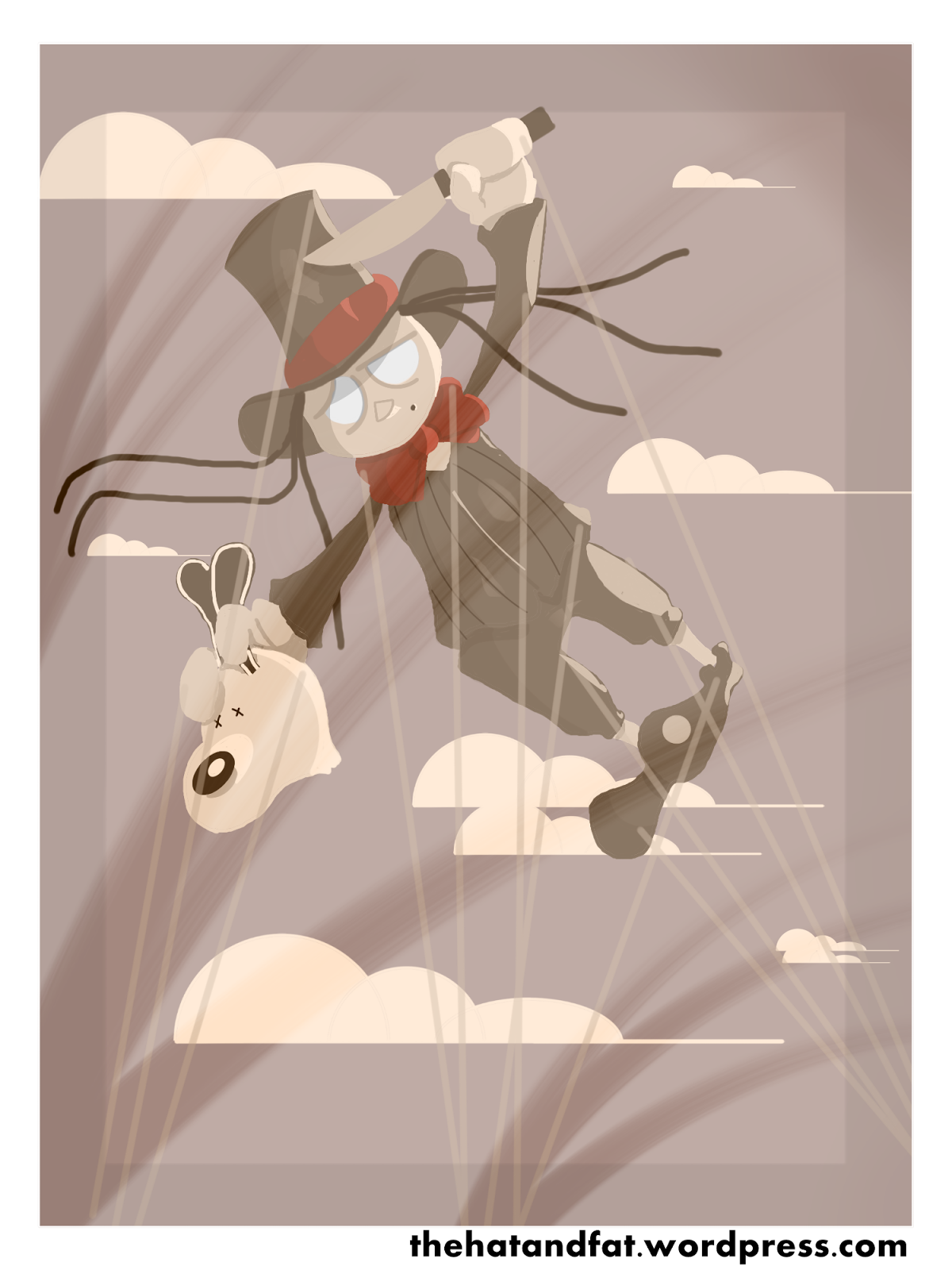 EW Crowe of The Hat And The Fat is back and giving notice to the Snoopy Balloon: His parade-hogging days are over!  Mighty Mouse Balloon, you're next! 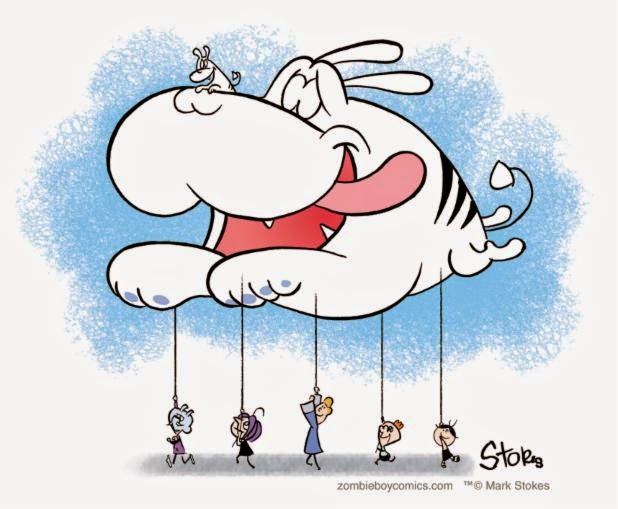 Up next, making his LOOOOONG awaited CCE debut, the amazing Mark Stokes of the groundbreaking web comic Zombie Boy!  After three years of begging, Mark finally joined the party and delivered Balloon Gorr!  No doubt the ZB cast is thankful REAL Gorr isn't that big! 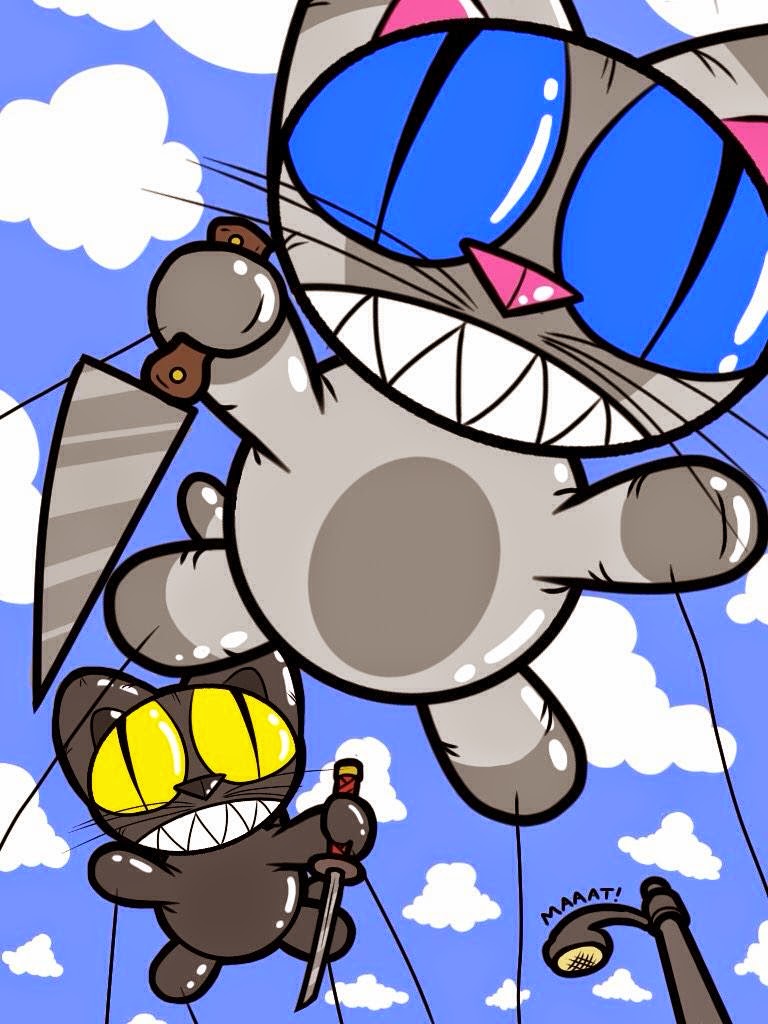 Next up is another CCE repeat offender, the great Matt Gross of CAAATS!  Today he brings Balloon Olive and Balloon Hazel, probably the most evil parade balloons ever!  Seriously, these look like the kind of balloons the Joker would've sprung on Gotham in the first Batman movie! 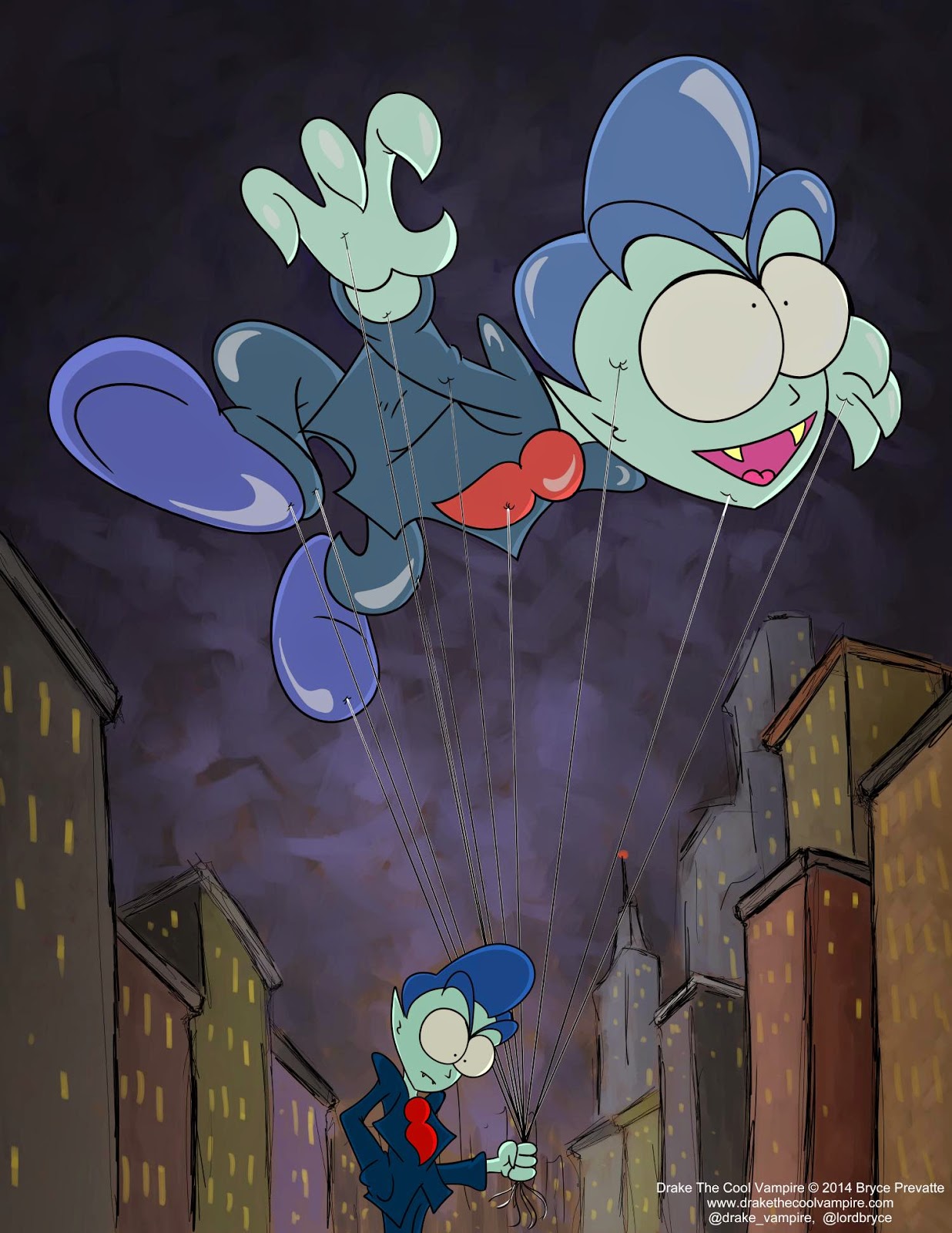 Here's a great piece of art from another CCE newcomer, Bryce Prevatte of Drake The Cool Vampire!  Bryce deserves special recognition here.  He really helped me out greatly with an awesome gift recently that'll help me with future projects.  He's living proof that there's still good out there. 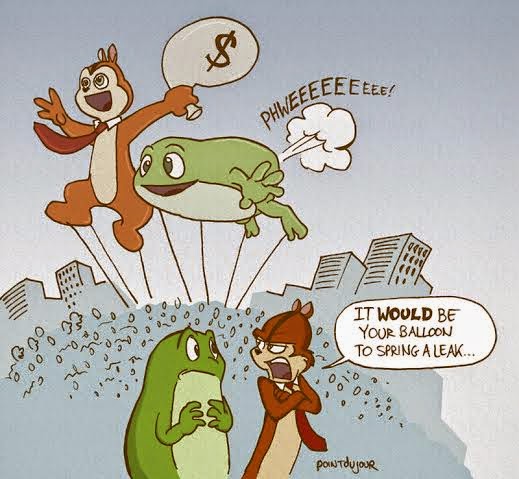 Making his return to the CCE is the brilliant James Point Du Jour of many many comics, including Satchel And Duff as seen above.  His art is just amazing in every detail.  Even more amazing?  That it took THIS long to get to a fart joke in one the CCE's! 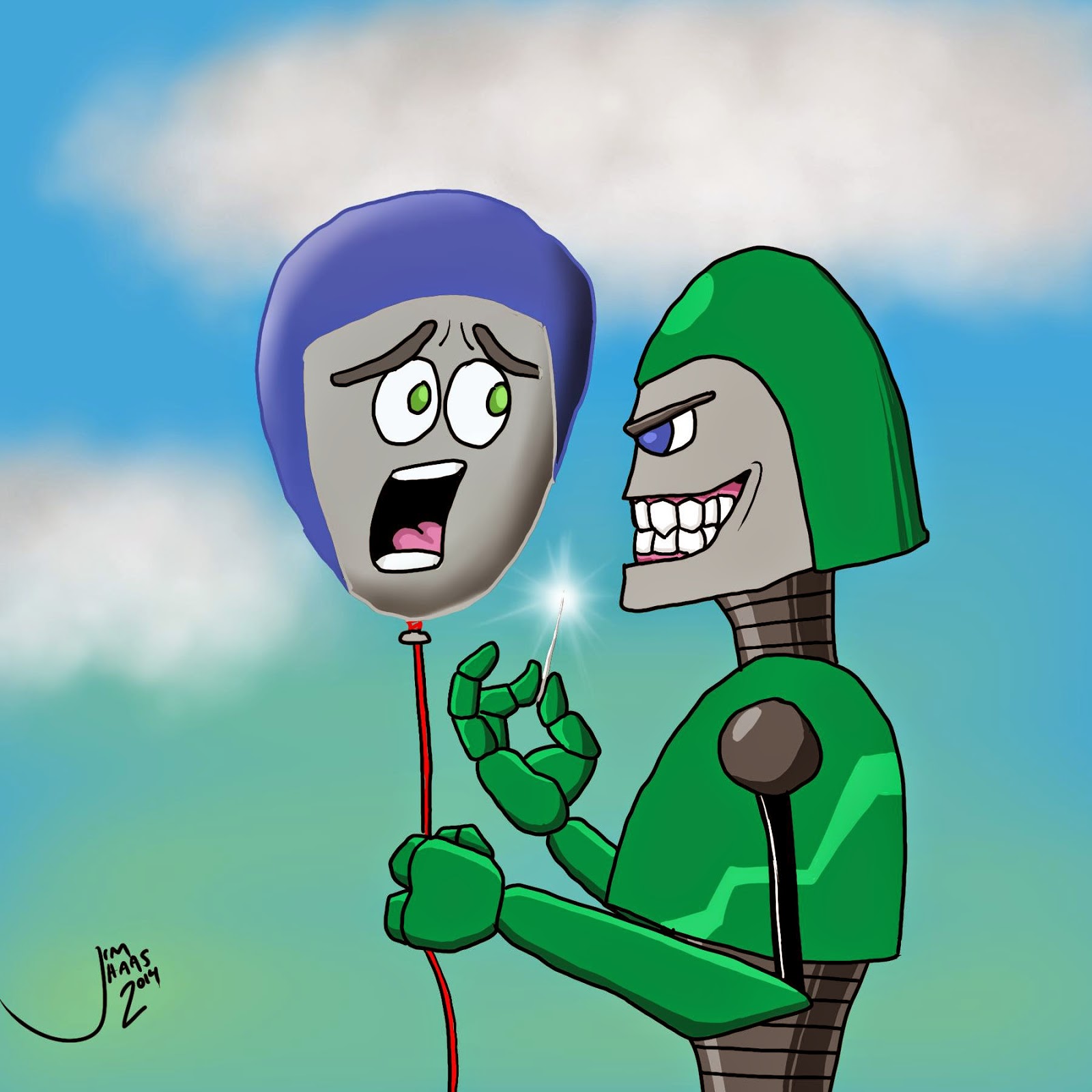 Heading to the homestretch is Jim Haas of Nate The Robot!  Clearly female robots are programmed for evil!  Even more wild, how can a balloon be made of metal?!  Thank goodness for cartoon logic! 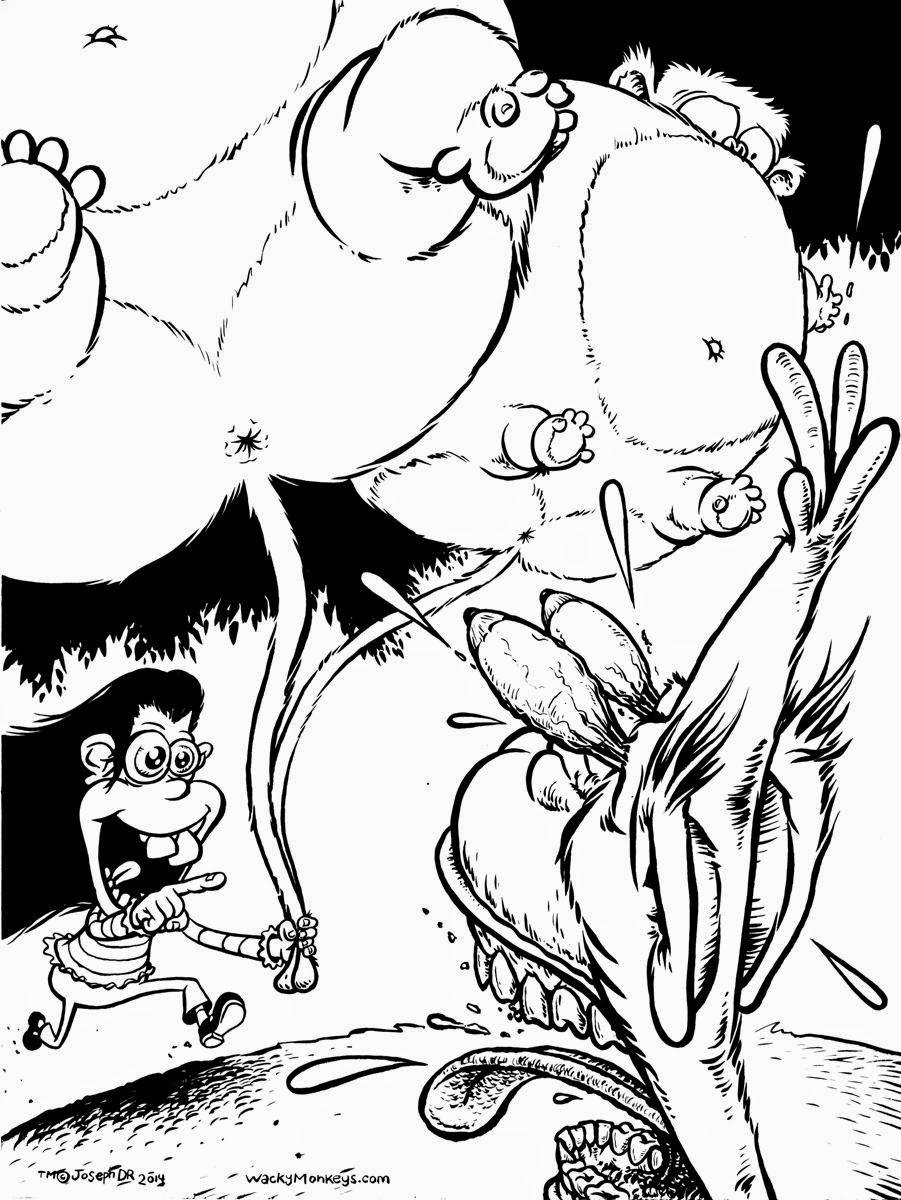 And finally, we close the CCE parade with another debut, this one from Joseph D. Rodriguez from Wacky Monkeys!  If you've never read this comic, you're really missing out!  It's a visual delight with SOOO much detail in the art and action.  Before you think that's just a really mean little girl up there, read the comic!  Those monkeys deserve worse!

Well, that's all for this one folks.  There WILL be another CRAZY CARTOON EXPERIMENT!  When,  why, it'll be in April!  April, 29th to be precise!  The due date is April 22nd and the theme goes as follows:

Make a poster for a fake death metal band!

Ever notice how most metal bands got wild names?  Here's your chance to come up with your own!  It's single panel, so no need to kill yourself making it!  As always, keep it family-friendly and all-ages!  Hit me up on Twitter if interested and, of course, have fun drawing it!  Special mention goes to Dawn Griffin from Zorphbert & Fred for this one.  It was one of her "Clip Art Fail" posts that inspired it!

Well folks, that's all for November.  Be back next time as we say goodbye to comics' most colorful couple, Mike and Mindy!  Their final comic is sure to be a "Smash" hit that'll make y'all laugh until you cry!  And the new series' logo will FINALLY be released to the masses!  Until then, take care, have a happy and fun Thanksgiving, a safe and quick Black Friday and I'll catch y'all later!
Posted by jonsstuff at 12:00 AM