IT'S THE CRAZY CHRISTMAS EXPERIMENT!!!

Merry Christmas everyone!  The Holidays are getting ever so closer and what better way to celebrate than with another round of the popular Crazy Cartoon Experiment!  This time around, we went with a Holiday-themed Experiment focusing on Christmas' ultimate "B" Lister, Frosty the Snowman!  The theme was What if Frosty the Snowman Were Real?  Well, some of my pals in the web comics community were more than happy to jump on board with this one, so let's see how folks would really react if that jolly soul really came to laugh and play!  Let the Crazy Christmas Experiment commence! 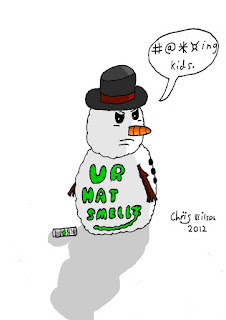 First up is new comer Chris Wilson of England!  Another WIZZO artist, he envisioned Frosty being targeted by a bunch of hooligans!  Damn kids!  Chris was the first one to finish this time and totally killed it! Way to go! 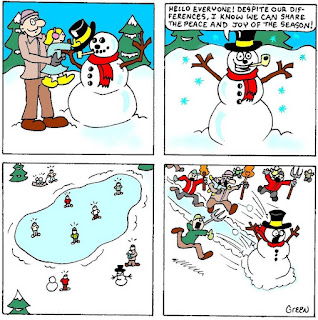 Up next, Vinnie the Vampire creator Tim Green makes his CCE debut with this hilarious take that shows the most likely reaction if Frosty were to suddenly come to life!  The really crazy part about this one is that I myself almost did something similar!  It's wild how alike some of us think.  Guess that's why it's an experiment! 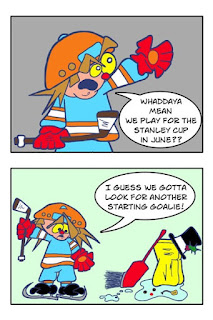 My CRAZY Canadian brother, Offseason creator Warren Frantz, did this one!  Instead of being scared of Frosty, he realized that the Snowman's tremendous girth could be a huge advantage at the hockey rink!  Frosty's width would make it tough to score on him!  Unfortunately, another harsh reality of life creeps in: The Stanley Cup Finals don't happen until early Summer! 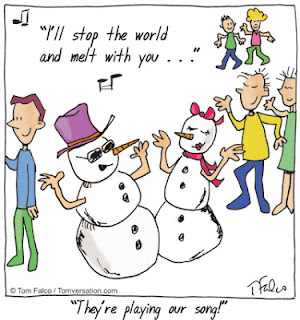 Next up is another CCE newcomer, Tomversation creator Tom Falco!  Tom envisioned that Frosty is still a jolly soul and would probably just dance his way into society!  He seems to be fitting in quite well.  He even found himself a cute Snowgirl!

How good is Zorphbert and Fred creator Dawn Griffin?  She had her submission done a full year before I even thought up the current CCE!  I swear Dawn you're like Prof. X or something!  As you can see, Dawn's Frosty has a bit of a mean streak to him!  A snowman with butt cheeks... What more can really be said about that? 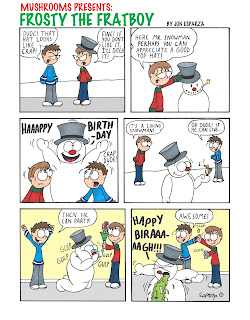 Well, you all waited patiently, so here it is, My entry into the CCE (Not to mention the latest Mushrooms)!  Frosty's discovered by a pair of Fratboys who decide to introduce Frosty to the brotherhood that is a College Fraternity!  I had to flip a coin on whether to do this idea or my other one.  I'm kinda glad this one won out, especially after I got Tim Green's submission!  I kinda feel bad for going gross in the last panel, but since I went sappy in the last Mike and Mindy, I think it all evens out.

Kim Belding of Picpak Dog knocks another one out of the park as he envisions Frosty trying to see the World, and learning that there are some places a snowman just shouldn't go!  I feel so bad for that poor lady sitting next to him.  I think she got a bigger jolt than ol' Frosty there! 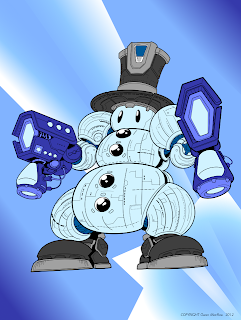 Beep Club creator Owen MacRae makes his CCE debut with a more practical way that Frosty could come to life!  Since there is no such thing as a magic hat, robotics are used to bring Frosty amongst the living!  Given the blasters, I think it's safe to assume that a scientist of the "Mad" variety was involved here! 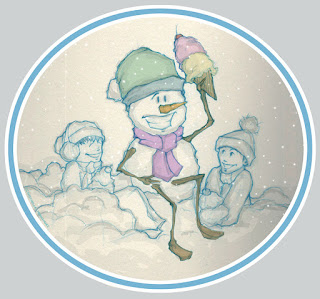 Next up, the lovely, beautiful and ever so charming Michelle Hernandez of Kat Daycare sent in this whimsical piece that shows Frosty living it up with a few friends!  And best of all, FROSTY HAS ICE CREAM!!!  When I saw this, it reminded me of that old Snowman cartoon from Britain.  Michelle has such a beautiful style.  She adds so much to the CCE.

Last but not least, the Grand Poobah of the Buns and Wieners Society, Crashsuit, sent in this animated masterpiece.  Poor Frosty finally comes to life, only to forget that Hot Coffee and Ice are a bad mix!  I've often said that Starbucks is an evil corporation.  This cartoon is living proof!  I urge all of you to boycott these Snowman Murderers now!

And thus concludes Part 1 of our Christmas fun!  So far, it's been a pretty amazing selection, with hardly any similarities!  You know, this isn't a competition, but I do feel some MVP awards need to be given out!  So in two weeks, I'll announce the MVP's for all of the CCE's thus far!  So PLEASE leave comments or tweet me your feedback!  Your voice matters!

Well, that's all for now!  I'll be back next time with Part 2 of the Crazy Christmas Experiment and some more "Frosty" fun!  And I would once again like to urge ALL of you to please give this Holiday season.  There's plenty of time and lot's of suitable charities.  Please don't let a child go without this Christmas.  Donate today!  Take care and I'll catch y'all later!
Posted by jonsstuff at 9:45 PM