IT'S TIME FOR THE FIRST EVER CRAZY CARTOON EXPERIMENT!!! 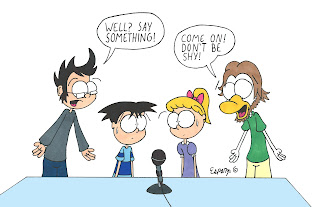 Before I start, I'd first like to say thanks the Bros. Oliver for an awesome experience doing their podcast!  We had a lot of fun and it's up on their site right now!  Click here to listen to it! (It can also be found on itunes as well, all for free!)

A few months back, I started this thing on Twitter called THE CRAZY CARTOON EXPERIMENT. It's goal was simple: Take a single subject and see how many different artists would interpret said subject.  Would they all be the same?  Would they all be different?  Just how similar/unique would each entry be in relation to one another?  Well, the results are in and it's time to check 'em all out!  Because of the amount of submissions I got, I had to split it up into two parts!  So I now present to you Part 1 of the Crazy Cartoon Experiment!  Big thanks to all the awesome artists who took part in this wild idea of mine!

What was the theme you ask?  "A Helium-Filled Dog Floating Precariously Close To A Cactus!"  Why that?  Because it was the CRAZIEST thing I could think of!  Enjoy the show! 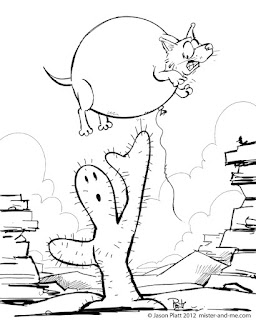 Our first entry comes from Jason Platt, creator of Mister and Me!  Love the child-like look of the Cactus, almost like it's more curious than mean!  One of the cooler things about Jason: In addition to cartooning, he's also an actor, director and playwright! 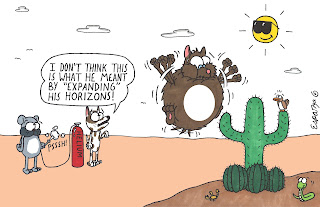 This is my splash into the Experiment!  I was trying to channel Gary Larson here, as singe-panel cartoons are not one of my strengths!  Still, I'm proud of the piece, although I do regret not doing a full page story. 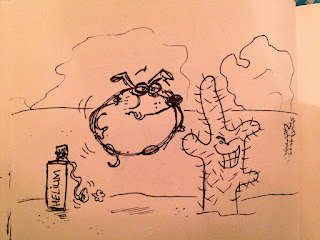 Here we have Oskar van Velden's entry!  Oskar is the creator of Mojo, and the one that inspired the Experiment in the first place!  He was looking for requests for quick sketches, and this was the goofiest thing I could think of!  Next thing I know, I'm asking other artists to give it a try!  The dog's look is priceless!

Next up, Zorphbert and Fred creator (And great Twitter pal!) Dawn Griffin!  As luck would have it, Dawn wanted to do an inflated dog story for Z&F, and worked the Crazy Cartoon Experiment into her storyline! Talk about dedication!  I love how Fred's the Cactus!  He such an eager fella! 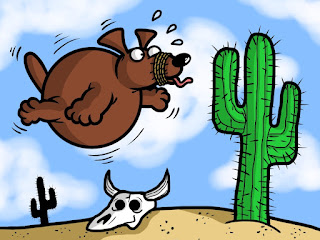 This entry comes from another great Twitter pal, CAAATS! creator Matt Gross!  I have reason to believe that Olive and Hazel might be responsible for the poor dog's predicament!  The steer's skull is a great touch too! 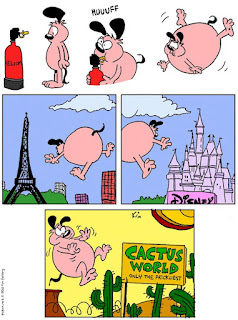 Picpak Dog creator Kim Belding is responsible for this beauty!  Kim let his very own creation, Picpak, try the Experiment himself!  I gotta admit, although this wasn't a contest, this really was among my favorites!  The timing between the panels and reactions are absolutely amazing!

Without question, Shawn Granger of Daddy's Girls, among many other titles, did the most unique entry.  When I said "Helium-Filled Dog," I never specifically said it had to be an actual inflated dog!  Shawn really thought outside the box, and hit a home run with this one!  He more than anybody got what I was trying to do with this Experiment!

This fun piece comes from the ever so awesome Crashsuit, founder of the Buns And Wieners Society (Of which I'm a member!)!  He not only drew it, he went the whole nine yards and animated it!  Even better, the Cactus is chasing the dog!  Now that's creative license! 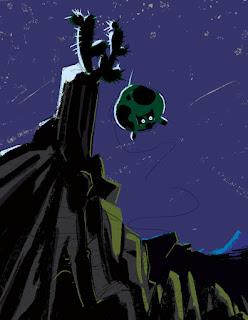 Max Overacts creator Caanan Grall is responsible for this dark take.  One of the more interesting things about this one is the angle of the dog.  Almost everybody else had the dog float in from the side.  I really dug the perspective he drew this at!  A very solid piece! 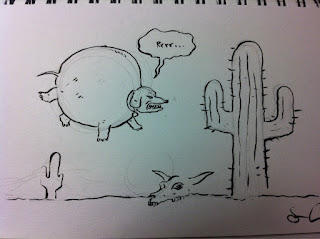 Sean Von Gorman did this quick sketch for the cause!  I feel a little bad, since I kinda duped him into it.  He too was looking for some quick-sketch ideas, and I shot it out to him!  Luckily, he was happy to take part!  I like how the dog doesn't seem to care that it's inflated! 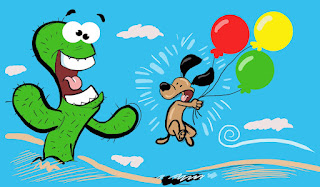 Cody the Cavalier creator Jamie Cosley did this fun sketch.  Although the dog isn't helium-filled, it does contain the basic elements of the Experiment: A Dog, Helium, and a Cactus, so I does count!  And I must say this: That is the CRAZIEST Cactus of the entire Experiment! 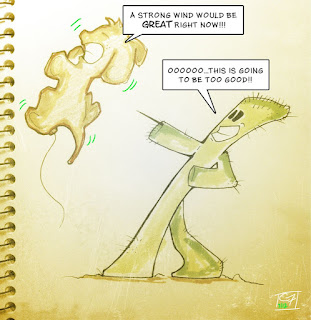 Our last entry for now comes from a great twitter pal, Kat Daycare creator Michelle Hernandez!  Michelle took an approach similar to that of Shawn Granger in that it's more like a toy balloon than a full-on inflated dog.  Once again, the line read "Helium-Filled Dog."  I never said it had to be an actual dog, so kudos to Michelle and Shawn for paying close attention!

And so we come to the halfway mark of the Crazy Cartoon Experiment!  So far, every entry has not only been awesomely hilarious, but they have all been very different!  One of the few similarities really has been a lot of the artists giving the Cactus a personality!  It's something I really wish I'd done now!  Oh well.  There's always next time I suppose!