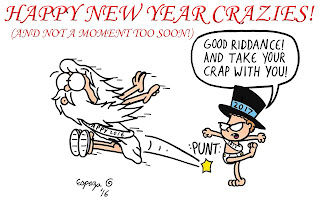 Another year is about to pass and one I think a lot of us are happy to see go away.  I won't go into details about the obvious stuff.  We all got mixed emotions about that.  2016 will always be a mixed bag for me.  From a working standpoint, it was actually my best year ever.  After 13 years I finally reached the middle rung of the stagehand ladder.  There's still a lot of climbing to do though and a challenge I'm ready to take.  Creatively speaking I think I did some of my best work yet.  Granted, it's really more subjective than that, but I'm still happy with the art I made, and that's what matters most in the end.  The big black cloud that looms over for me is matters with the family.  My father suffered a severe stroke back in January and has not been recovering as well as we had hoped he would.  I've made peace with my father's past and the actions that brought him down his rocky path, but it doesn't really make things any easier.  All I can really do is pray for his comfort and recovery.

Anyway, that's all for 2016!  We'll be back next time with a NEW year, NEW art and a NEW beginning!  Take care y'all and have a safe, fun and Happy New Year!  Catch y'all later!
Posted by jonsstuff at 12:00 AM No comments: 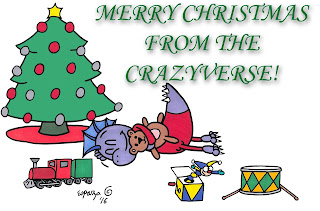 Christmas is this weekend?!?  GAH!!!  Why must time speed up the older we get?  It just ain't fair I tells ya!  Pepper the Dragon has already opened his gifts but hopefully y'all will be a little more patient these next few days.  I'll keep it short today since it's likely very busy for all of us this week.  Travel, shopping, cooking, gift wrapping...  It's all a part of what makes Christmas such a wild and worthwhile experience!

Well, that's all for now.  I wanna wish all of you a very safe, wonderful and Merry Christmas!  May the day be fun and full of family, friends, food and presents!  And please, since there's still time, help out those that are in need.  Every little bit helps!  Take care y'all and again, Merry Christmas!
Posted by jonsstuff at 12:00 AM 1 comment:

A PARTRIDGE IN A PEAR... WHAT HAPPENED TO THE TREE?!?

Good Heavens!  Is Christmas really next week?  I must stop blogging and get all my gifts wrapped!  There's so little to do and so much time to do it in!  Wait, strike that, reverse it!  Anyway, since we're all very busy, let's get to the art!  Enjoy... This is why you NEVER leave a partridge in a pear tree!  They're birds!  All those things do is eat!  Now I can't make any pear cider thanks to that bloated feather brain!  Oh well.  At least he isn't in my apple tree.  This was the last of the Daily Doodle "12 Days of Christmas" themes from a while back.  If memory serves, I did six or so of their 12 themes.  I think I might just go back and do the last few themes next year so my mind will be at ease!  This one was fun to draw.  Birds are cartoon naturals, so it's always a blast to draw them!  Oddly enough, I've never seen a wild partridge before.

Well, another week is down as Christmas approaches.  We'll be back next time with some super adorable art to celebrate the big day!  In the meantime please help out those that are less fortunate.  Food, toys, clothes...  There's always a need for them, so give today and help make the Holidays happy for all!  Take care and I'll catch y'all later!
Posted by jonsstuff at 12:00 AM No comments:

Well folks, we are now full on into the month of December!  Christmas is coming fast, as his the end of the year!  We still got a little time left to end 2016 on high note, so let's get right to it, shall we?  Enjoy... 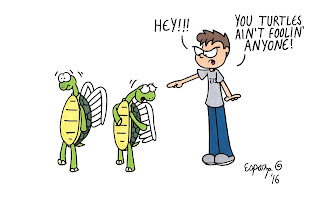 Poor turtles.  They just wanna get in on some of the seasonal fun too!  Think about it.  These poor reptiles spend the holidays buried in mud until the Spring thaw.  Can you blame them for wanting a little merriment in their amazingly-long lives?  Today's art came from the Daily Doodle's "12 Days of Christmas" theme a while back.  Wasn't able to do all of them, but the ones I did have time for were a lot of fun.  And I relish the opportunity to draw a good turtle or two, so I was in when they said draw two turtle doves!  And yes, that's me making a rare cartoon cameo in this piece!  And never fear folks.  Real me would never yell at turtles.  I'd invite them in for some holiday treats!

And so concludes another week of the Christmas Rush.  We'll be back next time with a look at a pear tree that was visited by a hungry partridge!  As the holidays push closer, I'd like to once again urge all of you to please think of others this Christmas.  Food banks and toy drives are always in need this time of year and every little bit helps, so donate today!  On that note, take care and I'll catch y'all later!
Posted by jonsstuff at 12:00 AM No comments: