This Is Spinal Tap is a film that is very near and dear to me. When I was a kid, I found it funny because it was a bunch of grown men doing really silly and stupid stuff. As an adult, I have a much better appreciation for the film. Not just because I'm older and slightly more sophisticated (or as sophisticated as a 25 year old who still eats "Cookie Crisps" and watches cartoons everyday can be). I appreciate it more because I work as a stagehand. I've been one for six years now and just recently became a member of the union out here (I.A.T.S.E. Local 122, San Diego Chapter). I've done quite a few shows over the years, like KISS, Comic-Con, WWE Monday Night RAW and Wicked to name a few. I've been doing it long enough that I'm starting to realize that some of the things they parody in the film actually happen! It's a fun job, and one that I am thankful to have.

While I must admit, I've never seen anything of a "Stonehenge" magnitude happen before, I have seen some mishaps, like a few wardrobe malfunctions and even performers getting hurt during a show. Most recently, I ran spotlight for Disney On Ice and witnessed a few mistakes, like skaters falling down (the girl playing Tinkerbell actually hurt herself and couldn't perform for the rest of the week as a result), cars and props not being where they were supposed to be, and, funniest of all, the Pixie Queen's harness getting caught in the track that was supposed to make her fly over the audience. Her dialogue could be heard, but she was nowhere to be found. It was really funny listening to the backstage crew freak out over the head set. I can't imagine how the actress playing the Queen must have felt, being hung up a good 50 ft. above the ice!

That's it for today folks. Come back next time for comics week, featuring a new Mike and Mindy story and a random one-shot. See y'all next time!
Posted by jonsstuff at 11:52 AM No comments:

Welcome back folks! It's time for some bloggin'.

Like most kids who spent their teen years between 1996 and 2002 (ages 12-18 for me), I was a huge fan of pro wrestling, with the WWF and ECW being my favorite promotions. To put it simply, I lived for wrestling. These days, not as much, although I still watch RAW every week and usually buy the "best of" sets (the "STARRCADE" boxed set is a particular favorite). I guess with only one major promotion now, it's just not as much fun (Nobody takes TNA seriously and note to Eric Bischoff: redoing Nitro 1997 all over again ain't the way to go!). Still, wrestling will always hold a special place in my heart. Especially BAD wrestling.

The year was 1993 and WCW's ultimate face, Sting, was tangled up in a bitter fued with Big Van Vader, Sid Vicious and the Harlem Heat, Booker T and Stevie Ray (known as Kane and Kole in those days). With the big "War Games" match coming up, Sting was in dire need of some partners. His first recruits were Davey Boy Smith and U.S. Champ Dustin Rhodes, great picks to say the least. Sadly, that's pretty much were the good news ended, for you see, Ole Anderson was the head booker in those days, and he found a final partner for Sting that he was sure would "shock" everyone. Enter the SHOCKMASTER!

Fred Ottman was a veteran grappler who, as Typhoon, had been a world tag team champion in the WWF with his partner, Earthquake (the late John Tenta). With a shot at a main event run with Sting dangled before him, Ottman threw on masked, called himself the Shockmaster, and jumped at the opportunity. Unfortunately, he didn't look were he was going.

On the night of his big debut, the Shockmaster jumped threw a banner amid fireworks, and promptly fell down. His mask, a Star Wars storm trooper helmet painted silver, flew off. Ottman grabbed his mask and tried to continue, but the damage was already done. Fans and wrestlers alike were cracking up. Commentator Jesse Ventura could harldy contain himself, blurting out "What an entrance by the Shockmaster!" The pre-recorded, Ole Anderson-provided voice box interview didn't exactly help either. It was probably the most unintentionally funny moment in wrestling history.

Within a few months, the Shockmaster gimmick was eventually dropped and Ottman became Uncle Fred, a bumbling dumbass who always screwed up. He was released shortly thereafter, and briefly returned to the WWF before retiring. He came out of retirement in 2001 to participate in the Gimmick Battle Royal at Wrestlemania 17.

For more info on this and other bad wrestling, visit www.wrestlecrap.com (Note to parents: wrestlecrap.com isn't always kid friendly, so be wary).
Posted by jonsstuff at 12:41 PM No comments: 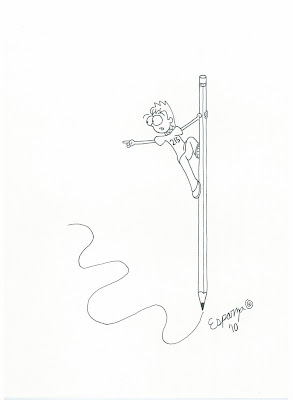 I'm back and ready for another week of blogging. I must admit, I'm still having a tough time figuring out how all this stuff works, but I'll get better as time goes on, I promise. Anyway, it's comic week here at the stuff, so try to enjoy these gems and come back next time for video week, when we explore the wacky world of pro wrestling! You'll be SHOCKED!!! 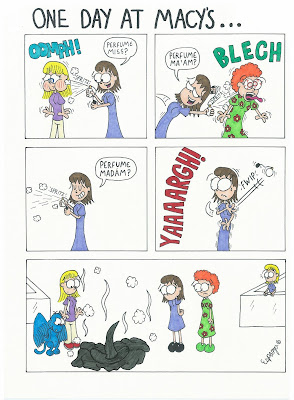 *Special Note: This comic was one of three that got rejected by MAD Magazine. I guess it didn't have enough jokes about farting and vomiting to meet their unusually high standards. 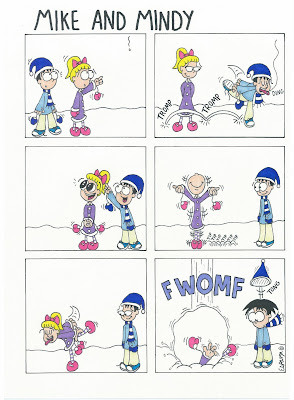 Posted by jonsstuff at 12:37 PM No comments:

WELCOME TO THE BLOG!!! 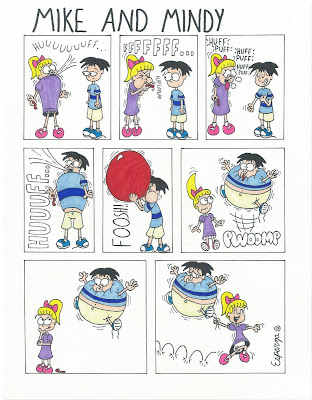 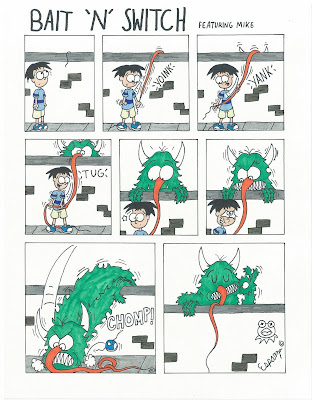 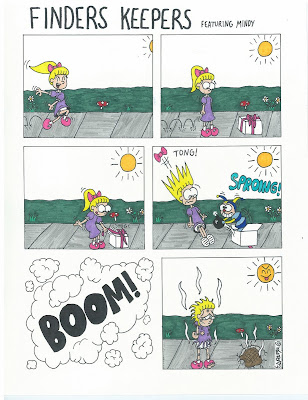 Howdy Folks! My name is Jon and I am a stagehand/writer/cartoonists who is just trying to venture out for the first time. There's so much to say and yet so little time, so I'll be brief. My goal is to update weekly with comics, video clips and random funny stories about some of the more interesting things that have happened to me over the years. Hopefully, y'all will enjoy the ride! You will learn much more about me in the coming weeks, but for now, let's check out some comics.

These were actually posted last month on the Kids Love Comics blog that Ray Friesen runs. We met at Comic-Con last year, and spent about forty minutes talking about Don Martin, twice no less! He's a good guy and a funny dude, so I highly recommend you check out his stuff (with titles like "Cupcake of Doom", how could you not want to check it out?). I also owe him lunch next time he's down my way (if you're reading this Ray, I haven't forgotten).

See y'all next week!
Posted by jonsstuff at 6:05 PM No comments: