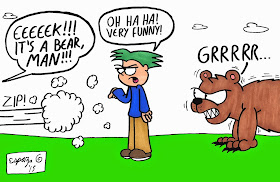 Hey folks!  Gotta surprise final post for the Merry Month of May here, and it's all for a good cause!  You see, I got a pal on Twitter named Bearman and every May he challenges us in the web comic realm to work his likeness or name into a comic or simply even a post and for every one time this happens, he makes a charitable donation!  Talk about an awesome dude?  He's already given tens of thousands of dollars to the those who need it most and pledges to continue this trend for life!  I'm all for charity, so I am happy again to take part in this very worthy cause!  Some of you may remember this same challenge from last year wear with a fairly raunchy Mike And Mindy comic that featured Mindy's coolest bloomers ever!  For this year's toon, I put both a bear AND a man in the comic!  It also helps that the man is in fact Bearman and someone even yells the words "Bear" and "Man."  What can I say?  I like to be thorough! 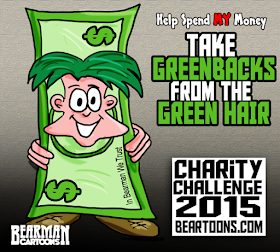 If you wanna learn more about this challenge or just wanna see some hilarious comic strips, click on the link here to get all the info you need!

Well, that's all for now.  I'll be back on Wednesday to kick off the Summer with some inked and colored goodness!  Until then, take care and I'll catch y'all later!
jonsstuff at 12:00 AM