I have long been a fan of Tom Petty and the Heartbreakers.  So you can imagine the shock and horror I felt when I heard that some dastardly person busted into his warehouse and stole several of his prize guitars!  You might almost imagine how hard I laughed when I learned that the dude who stole the guitars got caught a few days later when he tried to pawn them off at a pawn shop for a measly $250!!!  Are you kidding me?!  Each of those guitars was worth $5,000 apiece!  And you only wanted $250?!  As Forrest Gump would say: "Stupid is and stupid does..."  I guess I shouldn't so shocked.  After all, when have crackheads ever used logic when stealing things?

To celebrate Mr. Petty's victory over the intellectually-challenged, I thought I'd share one of his best songs, I Won't Back Down with ya!  Enjoy...


Despite the title, this is actually a Tom Petty solo song, although Heartbreakers guitarist Mike Campbell does play on it (Totally dig the Dennis and Gnasher shirt that Campbell is wearing during his awesome guitar solo!).  It was the first single off of his first solo album, 1989's Full Moon Fever.  You might also recognize a few other musicians backing Petty up!  Former Beatles George Harrison and Ringo Starr join in on the fun as does former ELO frontman Jeff Lynne, who also co-wrote the song with Petty.  Harrison and Lynne, along with Petty, Bob Dylan and the late Roy Orbison, had formed the band The Traveling Wilburys a few years earlier and had a string of hits in the late 80's.  Although Ringo is seen playing the drums in the video, the actual drummer for the song was Phil Jones. Still, I am of the opinion that Ringo Starr's mere presence makes everything better!

Well, that's all for now.  I'll be back next week with some new comics!  So be prepared as Mike and Mindy "spin" into action and be ready for a special new Mushrooms that picks up on the heels of one of last year's most popular posts!  So care everybody and enjoy what's left of the month of April.  Until next time, I'll catch y'all later!
Posted by jonsstuff at 11:34 AM No comments:

First and foremost, I'm so sorry for the recent inactivity. Between illness, an increase in my work schedule and some very busy cartooning sessions, I just haven't had a whole lot of spare time lately. In fact, my spare time may decrease further in the coming months, as I need to study for my Journeyman's Exam. It's huge deal for me, and a great opportunity. There will still be new comics every month, but skipped weeks may become a more common occurrence throughout the summer. Once again, I'm sorry for any inconvenience this may cause. Rest assured when the test is done, and the weight of the world is finally off my shoulders, I'll be back with frequent posts!
In the meantime, it's been way too long since I last did a wrestling post. I was really on the fence about this one, as it doesn't have a happy ending. However, the focus is on the gimmick, not the wrestler behind it. And this was definitely one of the dumbest things ever done in pro wrestling. Behold, the Renegade...
In 1995, WCW was signing every former WWF star they could. In less than a year, they brought in Hulk Hogan, Randy Savage, John Tenta, the Nasty Boys and announcers Gene Okerlund and Bobby Heenan, among others. There was one star, however, they couldn't land: Jim Hellwig, a.k.a. The Ultimate Warrior. Despite repeated attempts, Warrior just wasn't interested.
Normally, this wouldn't have been a problem, save for one thing: WCW already started promoting the Warrior, claiming that Hulk Hogan had the "Ultimate" surprise in store. Any time you utter the U-word in a wrestling ring you run a severe risk, as fans expect you to deliver. With no other options, WCW reverted to their standard policy of screwing over the fans.
They brought in an indy wrestler named Rick Wilson who was reportedly discovered in a male strip club by Hulk Hogan and Eric Bischoff. Why Hogan and Bischoff would frequent such a place is anybody's guess, but, eh, I'm not here to judge. Anyway, Wilson bore a close resemblance to Hellwig, so WCW was willing to roll the dice. They painted his face, dressed him in similar tights, and even gave him a knockoff Warrior theme, all in an effort to convince the fans that he was the real deal. And it worked! For about 30 seconds!
His initial appearance got fans excited until he actually started wrestling. It became very obvious very fast that the Renegade was an even worse in ring performer than the real Ultimate Warrior, which is really saying something. WCW did everything to get the guy over. They put him over Arn Anderson for the TV Title, paired him up with Hogan, Savage and Sting, and even had him annihilate countless jobbers in record time to make him seem like the Warrior. But in the end, the fans new better, and would have none of him.
Eventually, Jimmy Hart, who'd been the Renegade's manager, turned on him, costing him his TV Title. After that, the Renegade fell to the wayside. He was pretty much jobbed out for the rest of his run in WCW. Ironically enough, his last televised appearance happened at "War Games '98" where he dressed up as the Ultimate Warrior to help make it appear as if the Warrior had disappeared in a cloud of smoke in the ring, only to appear from the entrance ramp. I'd go into greater detail about this, but it might give you a headache! Come to think of it, the Warrior's WCW run was way stupider than the whole Renegade debacle.
In early 1999, Rick Wilson was fired from WCW. Not long after, he and his girlfriend parted ways as well. Having lost his job and his love, and with the WWF and ECW showing no interest, Wilson killed himself in the Spring of '99. He was only 33.
It's terribly sad that things went the way they did. It's hard to say who's at fault here. Wilson clearly wasn't cut out for the big time. In that same vein though, WCW could have done a little more to prepare the guy for the ring. He may have wrestled on the indy circuit, but by all accounts, stripping was his original bread winner. That's not exactly a great pre-requisite for a wrestling career. Fans hating the poor guy for merely doing as he was told didn't help. Still, you can't blame him for taking a chance at instant fame and notoriety. His legacy isn't particularly good, but perhaps Rick Wilson's soul can take some comfort in knowing that he was part of one of wrestling's most notorious gimmicks.
Well, that's all for now. Can't say for sure if I'll be back next week. In the meantime, take care and I'll catch y'all later!
Posted by jonsstuff at 11:18 PM No comments:

MIKE AND MINDY: "SPRINGING" INTO ACTION!!! 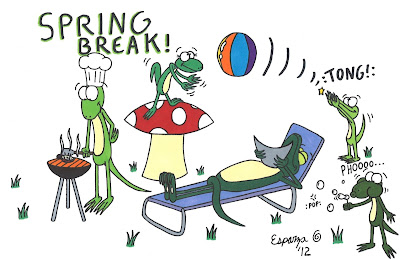 Well, after a one week break due to illness and work, I'm back with some new comics for the CRAZYVERSE! faithful! Spring is finally here, and that can mean only one thing: BIG ASS LIZARD BARBECUE ON MY FRONT PATIO!!! I live near a horse ranch, so I get all kinds of wildlife hanging out in my front yard. The most frequent visitors are fence lizards, followed by the stray cats who like to eat them! If I'm around, I chase the cats off, as I like the lizards, and want them to feel comfortable. And boy do these lizards love it in my yard. It's pretty funny to see 'em all out there, especially when they're trying to attract mates! I'm not kidding when I say there's about 20 lizards doing push-ups on my patio, hoping for some reptile love!

Well, I think that's enough talk about amorous, partying lizards for one day. It's time for some comics, with Mike and Mindy on deck! So here goes... 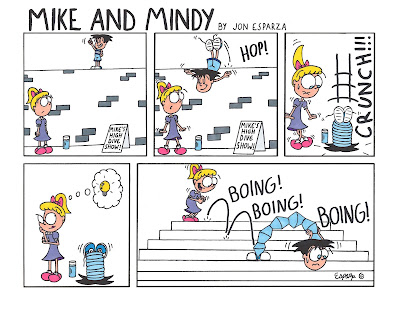 Although I do love the gag here, I feel I blew it on the second panel. The perspective on Mike is correct, but I should have drawn Mindy slightly smaller. Oh well. Can't win 'em all I suppose. I hope you fine readers can forgive me.

And now, onto Mushrooms... 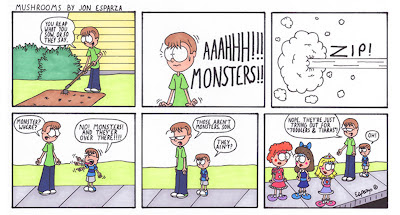 Well, this is it. The final "strip" version of Mushrooms, as it will return to it's original full-page format next month. I rarely make personal statements in my work, but this one's an exception; I really hate that Toddlers and Tiaras show! It's just so wrong on so many levels! I really do feel that child beauty pageants should be outlawed.

Well, that's all for this week. It's great to be back and it's great to have some new comics up! I did so many commissioned sketches at Wondercon last month, I almost forgot how much I love doing sequential art!

Before I go, I gotta do a quick plug for my Twitter pal Dawn Griffin. She does a great comic called Zorphbert and Fred, a tale of two aliens disguised as dogs sent to Earth to study humans. It's a very funny series and I highly recommend it to anybody who frequents this blog. I even did some fan art for her! To check it out, click here!

Alright, time to wrap it up. I'll be back next time with a funny wrestling post and even more craziness! Until next time, take care and have a safe and fun Easter and Passover with your friends and loved ones. Catch y'all later!

Posted by jonsstuff at 10:33 AM No comments: