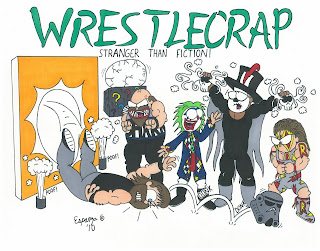 Well, it's that time a year again. Time to watch some football, stuff ourselves silly, and get down with some Wrestlecrap. 2010 marks the tenth anniversary of wrestlecrap.com, one of my all time favorite websites. Founded in 2000 by RD Reynolds, it has grown from humble beginnings to become one of the most popular sites on the web, spawning a radio show and no less than three books! It truly is one of the funniest things ever created, and I happily bow to RD as the true master of wrestling knowledge.

Some of you probably recognize the Shockmaster and Doink the Clown from previous posts, but the other three, from left to right, are the Shark (yes, those are teeth painted on his beard), voodoo master Papa Shongo, and the ultimate ripoff, the Renegade. I was a little on the fence about including Shark and the Renegade, since John Tenta and Rick Wilson have since passed away, but it's the characters I'm poking fun at, not the men behind them. John Tenta had a great sense of humor about his wrestlecrap past, even writing the forward to the first book! I kept things in perspective, and hopefully everybody will see that.

Anyway, I promised that if everybody was good, I'd give a Thanksgiving treat to everyone. Well, I don't know for sure if y'all were good, but I'm willing to take everbody's word for it. So here ya go, some more hijinx with the Gobbeldy Gooker!


Poor Fred Ottman. That guy could never really catch a break. The Shockmaster wasn't his first bad gimmick, but it certainly was his worst. So here, for the time ever in the same place, The Gobbeldy Gooker and the Shockmaster; wrestling's worst gimmicks!

And since it wouldn't be Thanksgiving without a visit from Luke and Butch, here's the Bushwackers!


It seems that dressing like giant birds runs in the Guerrero family. Anybody who's been watching Smackdown lately may have seen Jack Swagger's eagle mascot walking with him. Well, that's none other than Chavo Guerrero, Jr. hiding under the feathers. Well, at least his face is hidden.

Anyway that's all for now. I won't be posting again until December, so I want to wish everybody a Happy Thanksgiving and good luck braving the crowds on "Black Friday"! Take care and I'll see y'all next mont. Later!
Posted by jonsstuff at 6:45 PM No comments:

Hey folks, I'm back and ready for some crappy wrestling! I've often been accused of being unfair towards WCW since all of my wrestling posts have by and large been aimed at them. While it's true, I was a much more of a fan of the WWF than WCW, that doesn't mean that I think every move that Vince McMahon has ever made has been a good one. In fact, some of the worst gimmicks ever have come out of the WWF, including today's entry, often considered the Queen Mother of bad wrestling gimmicks (I still call the Shockmaster the worst).

Let's set the wayback machine to Thanksgiving night, 1990. It's a chilly night in Hartford, CT and the WWF is putting on its annual Survivor Series pay per view. For months on end, the WWF had carted around a giant egg to all their TV tapings, claiming that the only way to see what was inside was to order the show. Exactly why this egg was so important was never explained, but people were certainly interested. Given that the WWF had a good track record of delivering surprises, most fans probably assumed it was a new wrestler (and they were half right, but more on that later).

So the show went on, with fans itching to know what was inside. Finally, "Mean" Gene Okerland was dispatched to ringside, or eggside on this occasion, for the hatching. Gene teased fans as to what could be inside, suggesting a dinosaur, balloons or even the Playmate of the Month! Much to the chagrin of the fans, it was none of the above, although had this happened during the "Attitude" era (1997-2002), a Playboy Playmate probably would have hatched out of that egg. Nope, instead, this happened...

I think the video above is all the evidence you need to know that this whole thing went over about as well as a fart in church. I mean, look at that thing; it looks like a muppet on crack! It's hard to explain the motives behind the Gobbledy Gooker, but if I had to guess, the WWF probably thought that having a mascot might be a good way to appeal to a younger audience. They already had a lot of success marketing to children through toylines, clothing, video games, even an ice cream bar! A man in a turkey costume seemed like the next logical step. Either that or Vince McMahon had decided that conquering most of the known wrestling world at that time wasn't good enough, so it time to take on Sesame Street! Sadly the gimmick failed, thus robbing us of a Gooker/Big Bird match at Wrestlemania.

With the Gobbledy Gooker being a huge failure, the WWF dumped the character, refusing to even acknowledge its existence for many years. However, some vignettes, like the one below, were taped with the Gooker before hand, but it's unknown if they ever actually aired.

In the spring of 2001, fans were shocked to see that the Gooker was included in the Wrestlemania 17 Gimmick Battle Royal. The real shock, however, came in the positive reaction the crowd gave him. Wrestling is kind of funny like that. Crap that we hated twenty years ago can sometimes be remembered fondly as a nostalgic sign of its time. And in case you're curious, that's Hector Guerrero, the older brother of the late, great Eddie Guerrero, who donned the feathers and whiffle balls that fateful night.

And as for the fans being half right about a new wrestler being the big surprise. Later on in the evening, former WCW jobber "Mean" Mark Calloway carried an urn for the first time, making his debut as the Undertaker, one of the most successful gimmicks of all time. See that? The show wasn't a total loss.

Well, that's all for today. I hope y'all enjoyed this latest wrestling entry. I don't know if I'll post again this month, but if everybody behaves themselves, I might post a Thanksgiving treat for everybody. Take care, and I'll catch y'all later!
Posted by jonsstuff at 7:16 PM No comments:

Hey folks, I'm back and ready to entertain. Hopefully, everybody had a safe and fun Halloween this year. Judging by the increased traffic my blog had last week, I'm guessing some girls discovered my mentioning that I had to work the Justin Beiber concert last week. I'm going to go ahead and burst everybody's bubble right now. Yes, I worked it. No, I didn't meet him. I did see him however, and man is that kid short! I mean, he couldn't have been no more 4'5" at best. I had a hard time believing he was a teenager (When I was 16, I was already 6' even.). Is it any wonder some twelve year old beat his ass a few weeks back! His road crew were real nice guys. They didn't think too highly of him though.

It was a busy but fun weekend, the highlight of which was catching up with Matt Lorentz. He's busy distributing the Aftercon pieces that sold while returning the ones that didn't sell. We only had a few minutes to talk, but it was great to see him again. He gave me some great tips for coloring with Prisma Color Markers. So maybe now, my comics will have a more professional look to them. Now if only I had asked him for some tips on coloring within the lines! If you're reading this Matt, you're a cool dude and I look forward to working with you again in the future, and thanks again for the coloring tips!

Anyway, enough of the sentimental crap. Enjoy the comics! 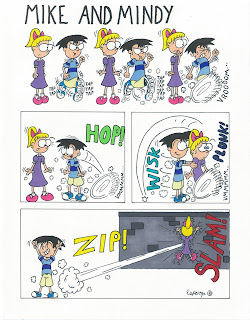 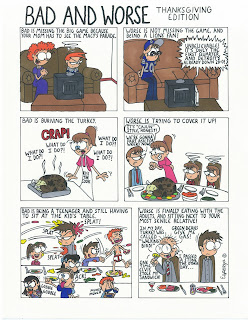 I do hope this month's comics were enjoyable. Bad and Worse is a new feature I'm introducing this week, and I'm hoping it catches on. This won't be a monthly comic, but I do plan on doing more of them should you fine readers like it.

Well, that's it for today. I'll be back next time with a real "turkey" of a wrestling post. I think you folks will really "gobble" it up! It's going to be "egg-ceptional"! (Man, I really suck at this coming up with puns thing!) Until next time, y'all take care now. Later!
Posted by jonsstuff at 3:19 PM No comments: