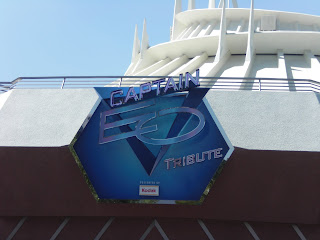 Well, I'm back from the Wizard World Convention in Anaheim, and it was an awesome experience! I made many new friends and saw a lot of cool stuff. And I spent way more money than I should Have! But it was all cool. The staff at Wizard and Toy Fare Magazines did a great job, and if they ever want to set up shop in San Diego, just in case our Comic-Con takes off, they are more than welcome to.

A big thanks goes out to the many people I met and got a lot of positive feedback from, including: Matt Lorentz, Phil Ortiz, Primo, Verne Troyer, Erika Eleniak, Bill Roshia at Shocker Toys, TJ Sulliven, Rebecca Hicks, Bill Farmer, Billy West, Chris Smith, Maurice LaMarche, Phil LaMar, Jennifer Hale, Catherine Taber and Angela Lee. It was great to meet all of you and I hope to meet all of you again in the future.

An extra special thanks goes out to Scott Shaw!, Phil Yeh, Rob Paulsen and Ruben Martinez. Ruben did an awesome drawing of Charlie Brown as a zombie for my sketchbook and was very complimentary of my drawing skills. When I told Rob that Pinky and the Brain had a big following in my union, he broke into his Pinky voice and thanked all of us for our hard work. He's a class act and a kind man. Scott and Phil gave me a ton of advice and pointers about my work and how to better myself, especially Phil. We had two very long conversations that have really fueled my imagination and make me want to try harder. He even invited me to a party he's throwing at the San Diego Con this summer. My new goal now, is to be a part of his Winged Tiger series, as well as his guitar charity. You are a great man Phil, and your advice and help was immeasurable. I won't let you down.

That's all for this week. Time permitting, I'll be back next week with some wrestlecrap for all of you. By the way, the real site, www.wrestlecrap.com, has posted a ton of their classic reviews in honor of their tenth anniversary. I highly recommend checking it out while it's still up. Trust me, they are all hysterically funny. In the meantime, later!

But first, here are some random shots from the convention. 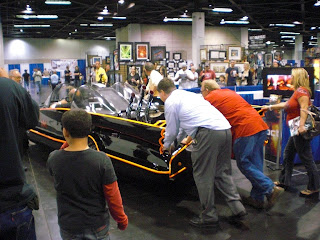 The Batmobile getting push started after the jumper cables failed. 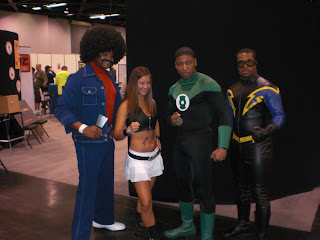 The dude with the afro was freakin' hilarious! 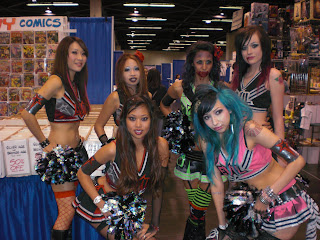 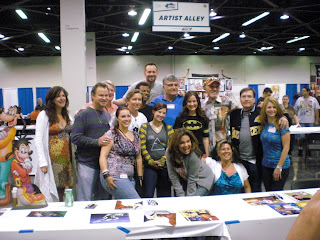 The Voice Artists Pavilion; more characters than you can shake a stick at. 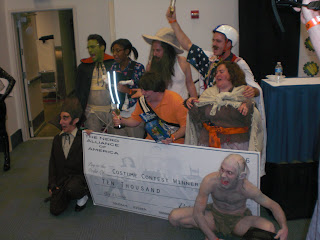 Some of the Costume Contest Participants. They were all great. 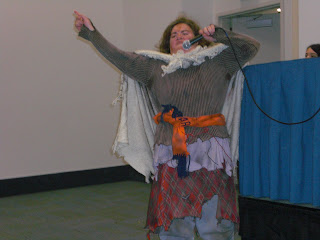 Homless Woman, one of the Funniest bits ever. 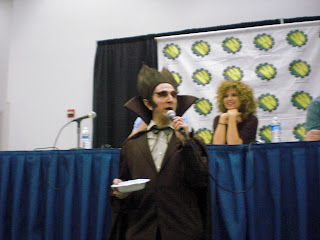 Count Chocula puts in an appearance (and handed out "TEAM CHOCULA" buttons). 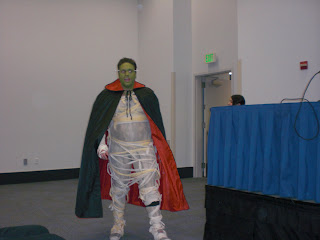 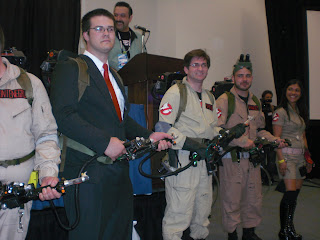 The Ghostbusters were well represented... 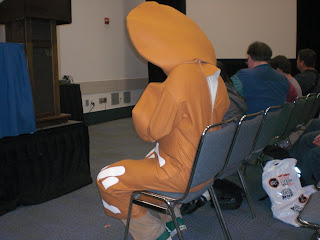 Which made the Gingerbread Man move in for a closer look. 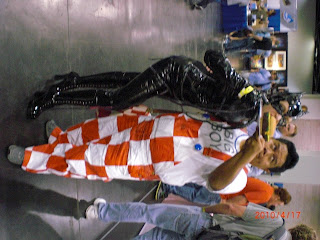 Catwoman and the Big Boy defy gravity for a quick bite. 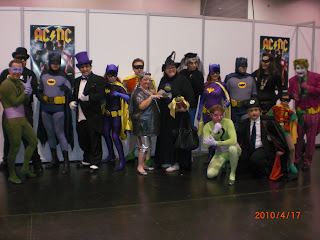 The crappy wide-angle lens on my camera doesn't do justice for the group of people that showed up in a whole slew of classic Batman costumes, which later included Mr. Freeze and the Mad Hatter. 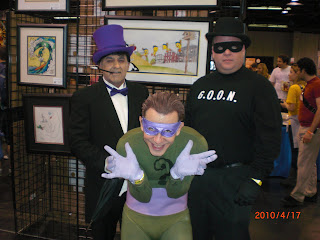 Luckily, some of them were willing to pose for closer shots (The "G.O.O.N." costume was my favorite.). 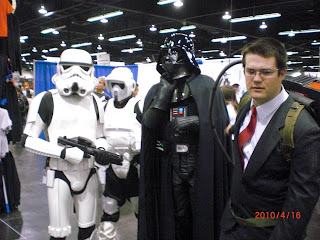 Fresh from being vindicated, Ghostbuster Ray celebrates with Darth Vader and some Stormtroopers. 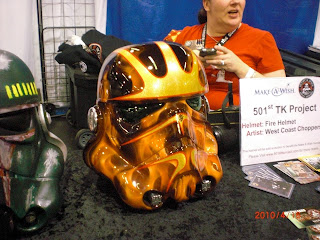 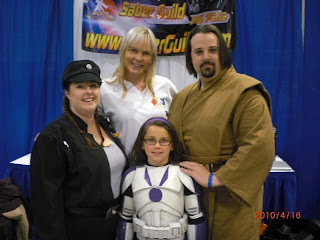 Members of the Saber Guild, a very nice bunch. 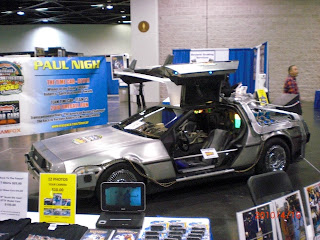 "THAT'S THE POWER OF LOOOOOOVE!"
Posted by jonsstuff at 11:35 AM No comments:

A MOMENT WITH MR. SHOW

Greetings loyal readers (all three of you)! I come bearing a video gift to you all. But first, a quick recap of the Blackeyed Peas concert I worked this past Saturday. Usually, whenever a rap show comes to town, us stagehands dread it. Not because we don't like rap music, but because nothing ever goes right on the calls. Whether it be incompetent road crews, egotistical rap artists or fans that are really stoned and unruly, they just aren't any fun. But the Blackeyed Peas really had their act together. Besides having a nice road crew, they also had an awesome set up, with a stage that was like a giant transformer! All in all, I can't say enough nice things about them.

Now onto the video:


Mr. Show with Bob and David was a great show that was well ahead of it's time. This skit was actually the second of three that also featured "Mayostard" and "Mustmayostardonaise". They were all hysterically funny, and there will be more Mr. Show posts in the future, I promise.

I'm afraid I won't be posting next week, as I'll be at the Wizard World Convention in Anaheim. I'll be back the following week with pictures from the convention.

Sadly, I have to end this week's post with the sad news of the passing of former WCW/WWF star Chris Kanyon. He was a terrific wrestler and great interview, whose talent always shined through the many crappy gimmicks that WCW bestowed upon him (Anybody remember Mortis?). We'll miss you Chris. Party on dude!
Posted by jonsstuff at 12:28 PM No comments:

Well, it's Easter time here at the stuff, so I'll keep it brief today with some comics for you fine people. I'll be back next week with a video, a review of the Clash of the Titans remake, and a recap any interesting things that might happen this week at the Black Eyed Peas concert I'll be working at (every rap concert I have ever worked has been a colossal headache, so we'll see if this one will be any different). See y'all next week! Oh, and before I forget... 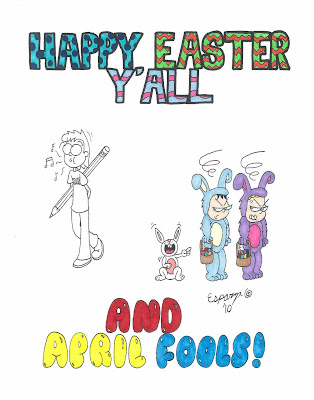 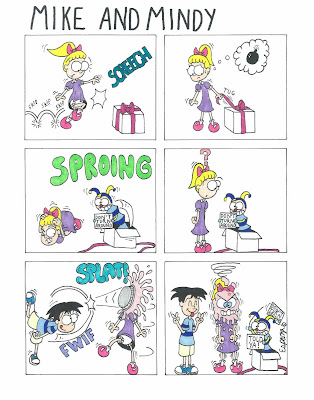 Posted by jonsstuff at 7:51 PM No comments: